Using genetic tools in mice, researchers at Johns Hopkins Medicine say they have identified a pair of proteins that precisely control when sound-detecting cells, known as hair cells, are born in the mammalian inner ear. The proteins, described in a report published June 12 in eLife, may hold a key to future therapies to restore hearing in people with irreversible deafness.

“Scientists in our field have long been looking for the molecular signals that trigger the formation of the hair cells that sense and transmit sound,” says Angelika Doetzlhofer, Ph.D., associate professor of neuroscience at the Johns Hopkins University School of Medicine. “These hair cells are a major player in hearing loss, and knowing more about how they develop will help us figure out ways to replace hair cells that are damaged.” 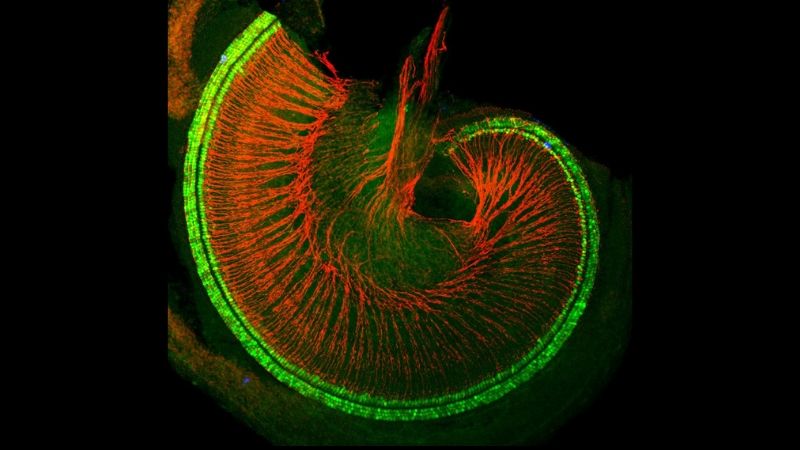 In order for mammals to hear, sound vibrations travel through a hollow, snail shell-looking structure called the cochlea. Lining the inside of the cochlea are two types of sound-detecting cells, inner and outer hair cells, which convey sound information to the brain.

An estimated 90% of genetic hearing loss is caused by problems with hair cells or damage to the auditory nerves that connect the hair cells to the brain. Deafness due to exposure to loud noises or certain viral infections arises from damage to hair cells. Unlike their counterparts in other mammals and birds, human hair cells cannot regenerate. So, once hair cells are damaged, hearing loss is likely permanent.

Scientists have known that the first step in hair cell birth starts at the outermost part of the spiraled cochlea. Here, precursor cells start transforming into hair cells. Then, like sports fans performing “the wave” in a stadium, precursor cells along the spiral shape of the cochlea turn into hair cells along a wave of transformation that stops when it reaches the inner part of the cochlea. Knowing where hair cells start their development, Doetzlhofer and her team went in search of molecular cues that were in the right place and at the right time along the cochlear spiral.

“In nature, we knew that Activin A and follistatin work in opposite ways to regulate cells,” says Doetzlhofer. “And so, it seems, based on our findings like in the ear, the two proteins perform a balancing act on precursor cells to control the orderly formation of hair cells along the cochlear spiral.”

To figure out how exactly Activin A and follistatin coordinate hair cell development, the researchers studied the effects of each of the two proteins individually. First, they increased the levels of Activin A in the cochleas of normal mice. In these animals, precursor cells transformed to hair cells too early, causing hair cells to appear prematurely all along the cochlear spiral. In mice engineered to either overproduce follistatin or not produce Activin A at all, hair cells were late to form and appeared disorganized and scattered across multiple rows inside the cochlea.

“The action of Activin A and follistatin is so precisely timed during development that any disturbance can negatively affect the organization of the cochlea,” says Doetzlhofer. “It’s like building a house — if the foundation is not laid correctly, anything built upon it is affected.”

Looking more closely at why overproduction of follistatin results in disorganized hair cells, the researchers found that high levels of this protein caused precursor cells to divide more frequently, which in turn made more of them convert into inner hair cells in a haphazard way.

Doetzlhofer notes that her research in hair cell development, although fundamental, has potential applications to treat deafness caused by damaged hair cells: “We are interested in how hair cells evolved because it’s an interesting biological question,” she says. “But we also want to use that knowledge to improve or develop new treatment strategies for hearing loss.”

The research was supported by the National Institute on Deafness and Other Communication Disorders (DC011571, DC013477, DC012972 and DC016538) and the David M. Rubenstein Fund for Hearing Research.

Other contributors to the research include Meenakshi Prajapati-DiNubila, Ana Benito-Gonzales, Erin J. Golden and Shuran Zhang, all from Johns Hopkins School of Medicine.