New Clues To How Life Emerged on Earth

Life on Earth arose about 4 billion years ago when the first cells formed within a primordial soup of complex, carbon-rich chemical compounds.  The first cells on ancient Earth may have emerged because building blocks of proteins stabilized membranes\

These cells faced a chemical conundrum. They needed particular ions from the soup in order to perform basic functions. But those charged ions would have disrupted the simple membranes that encapsulated the cells.

A team of researchers at the University of Washington has solved this puzzle using only molecules that would have been present on the early Earth. Using cell-sized, fluid-filled compartments surrounded by membranes made of fatty acid molecules, the team discovered that amino acids, the building blocks of proteins, can stabilize membranes against magnesium ions. Their results set the stage for the first cells to encode their genetic information in RNA, a molecule related to DNA that requires magnesium for its production, while maintaining the stability of the membrane. 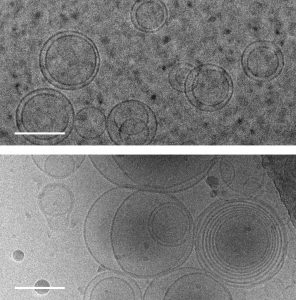 The findings, published Aug. 12 in the Proceedings of the National Academy of Sciences, go beyond explaining how amino acids could have stabilized membranes in unfavorable environments. They also demonstrate how the individual building blocks of cellular structures — membranes, proteins and RNA — could have co-localized within watery environments on the ancient Earth.

“Cells are made up of very different types of structures with totally different types of building blocks, and it has never been clear why they would come together in a functional way,” said co-corresponding author Roy Black, a UW affiliate professor of chemistry and bioengineering. “The assumption was just that — somehow — they did come together.”

Black came to the UW after a career at Amgen for the opportunity to fill in the crucial, missing details behind that “somehow.” He teamed up with Sarah Keller, a UW professor of chemistry and an expert on membranes. Black had been inspired by the observation that fatty acid molecules can self-assemble to form membranes, and hypothesized that these membranes could act as a favorable surface to assemble the building blocks of RNA and proteins.

“You can imagine different types of molecules moving within the primordial soup as fuzzy tennis balls and hard squash balls bouncing around in a big box that is being shaken,” said Keller, who is also co-corresponding author on the paper. “If you line one surface inside the box with Velcro, then only the tennis balls will stick to that surface, and they will end up close together. Roy had the insight that local concentrations of molecules could be enhanced by a similar mechanism.”

The team previously showed that the building blocks of RNA preferentially attach to fatty acid membranes and, surprisingly, also stabilize the fragile membranes against detrimental effects of salt, a common compound on Earth past and present. 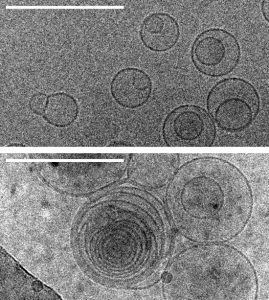 The team hypothesized that amino acids might also stabilize membranes. They used a variety of experimental techniques — including light microscopy, electron microscopy and spectroscopy — to test how 10 different amino acids interacted with membranes. Their experiments revealed that certain amino acids bind to membranes and stabilize them. Some amino acids even triggered large structural changes in membranes, such as forming concentric spheres of membranes — much like layers of an onion.

“Amino acids were not just protecting vesicles from disruption by magnesium ions, but they also created multilayered vesicles — like nested membranes,” said lead author Caitlin Cornell, a UW doctoral student in the Department of Chemistry.

The researchers also discovered that amino acids stabilized membranes through changes in concentration. Some scientists have hypothesized that the first cells may have formed within shallow basins that went through cycles of high and low concentrations of amino acids as water evaporated and as new water washed in.

The new findings that amino acids protect membranes — as well as prior results showing that RNA building blocks can play a similar role — indicate that membranes may have been a site for these precursor molecules to co-localize, providing a potential mechanism to explain what brought together the ingredients for life.

Keller, Black and their team will turn their attention next to how co-localized building blocks did something even more remarkable: They bound to each other to form functional machin

“That is the next step,” said Black.

Their ongoing efforts are also forging ties across disciplines at the UW.

“The University of Washington is an unusually good place to make discoveries because of the enthusiasm of the scientific community to work collaboratively to share equipment and ideas across departments and fields,” said Keller. “Our collaborations with the Drobny Lab and the Lee Lab were essential. No single laboratory could have done it all.”