Nanoparticles May One Day Give Humans Built-in Night Vision

Movies featuring heroes with superpowers, such as flight, X-ray vision or extraordinary strength, are all the rage. But while these popular characters are mere flights of fancy, scientists have used nanoparticles to confer a real superpower on ordinary mice: the ability to see near-infrared light. Today, scientists report progress in making versions of these nanoparticles that could someday give built-in night vision to humans.

"When we look at the universe, we see only visible light," says Gang Han, Ph.D., the project's principal investigator, who is presenting the work at the meeting. "But if we had near-infrared vision, we could see the universe in a whole new way. We might be able to do infrared astronomy with the naked eye, or have night vision without bulky equipment."

The eyes of humans and other mammals can detect light between the wavelengths of 400 and 700 nanometers (nm). Near-infrared (NIR) light, on the other hand, has longer wavelengths -- 750 nm to 1.4 micrometers. Thermal imaging cameras can help people see in the dark by detecting NIR radiation given off by organisms or objects, but these devices are typically bulky and inconvenient. Han and his colleagues wondered whether they could give mice NIR vision by injecting a special type of nanomaterial, called upconversion nanoparticles (UCNPs), into their eyes. These nanoparticles, which contain the rare-earth elements erbium and ytterbium, can convert low-energy photons from NIR light into higher-energy green light that mammalian eyes can see.

Organic nanoparticles in a vial convert invisible near-infrared light to intense blue light, which can easily be seen by human eyes. 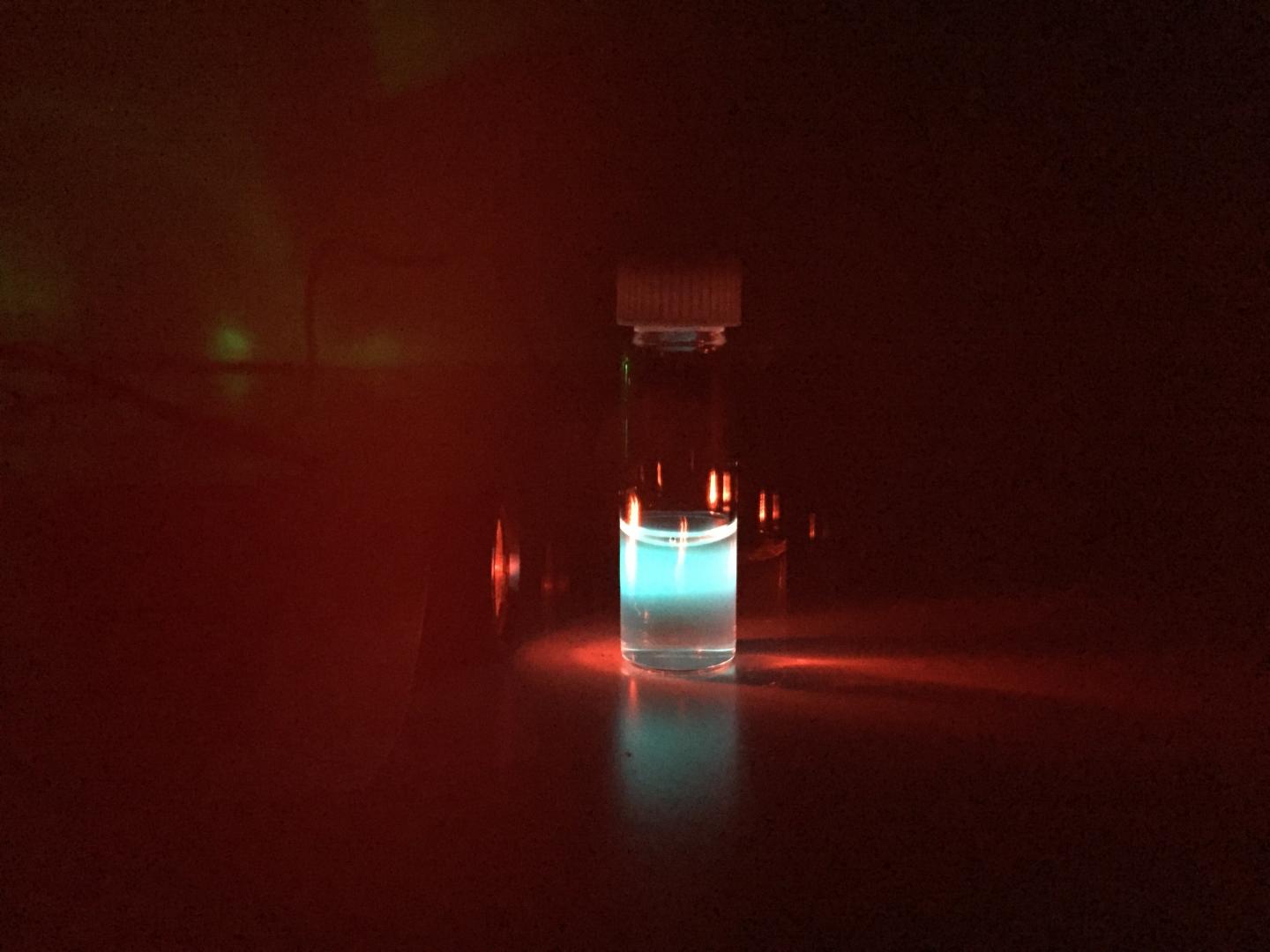 In work published earlier this year, the researchers, who are at the University of Massachusetts Medical School, targeted UCNPs to photoreceptors in mouse eyes by attaching a protein that binds to a sugar molecule on the photoreceptor surface. Then, they injected the photoreceptor-binding UCNPs behind the retinas of the mice. To determine whether the injected mice could see and mentally process NIR light, the team conducted several physiological and behavioral tests. For example, in one test, the researchers placed the mice into a Y-shaped tank of water. One branch of the tank had a platform that the mice could climb on to escape the water.

The researchers trained the mice to swim toward visible light in the shape of a triangle, which marked the escape route. A similarly lit circle marked the branch without a platform. Then, the researchers replaced the visible light with NIR light. "The mice with the particle injection could see the triangle clearly and swim to it each time, but the mice without the injection could not see or tell the difference between the two shapes," says Han. A video of this work, posted by Han's institution, can be viewed here.

Although the UCNPs persisted in the mice's eyes for at least 10 weeks and did not cause any noticeable side effects, Han wants to improve the safety and sensitivity of the nanomaterials before he contemplates trying them out in humans. "The UCNPs in our published paper are inorganic, and there are some drawbacks there," Han says. "The biocompatibility is not completely clear, and we need to improve the brightness of the nanoparticles for human use." Now, the team is experimenting with UCNPs made up of two organic dyes, instead of rare-earth elements. "We've shown that we can make organic UCNPs with much improved brightness compared with the inorganic ones," he says. These organic nanoparticles can emit either green or blue light. In addition to having improved properties, the organic dyes could also have fewer regulatory hurdles.

One of the next steps for the project might be translating the technology to man's best friend. "If we had a super dog that could see NIR light, we could project a pattern onto a lawbreaker's' body from a distance, and the dog could catch them without disturbing other people," Han says. Superhero powers aside, the technology could also have important medical applications, such as treating diseases of the eye. "We're actually looking at how to use NIR light to release a drug from the UNCPs specifically at the photoreceptors," Han says.

The researchers presented their results at the American Chemical Society (ACS) Fall 2019 National Meeting & Exposition. ACS, the world's largest scientific society, is holding the meeting here through Thursday. It features more than 9,500 presentations on a wide range of science topics