Hypothetical Particle Could Be Heavyweight Candidate for Dark Matter

Almost a quarter of the universe stands literally in the shadows. According to cosmologists’ theories, 25.8% of it is made up of dark matter, whose presence is signaled essentially only by its gravitational pull. What this substance consists of remains a mystery.

Hermann Nicolai, Director at the Max Planck Institute for Gravitational Physics in Potsdam, and his colleague Krzysztof Meissner from the University of Warsaw have now proposed a new candidate - a superheavy gravitino. The existence of this still hypothetical particle follows from a hypothesis that seeks to explain how the observed spectrum of quarks and leptons in the standard model of particle physics might emerge from a fundamental theory. In addition, the researchers describe a possible method for actually tracking down this particle.


Looking at dark matter: this photo is a montage of several images and shows the colliding galaxy clusters collectively known as the “Bullet Cluster” (1E 0657-56). The galaxies visible in optical light in the background image are overlaid with X-rays from the intergalactic gas clouds (pink), as well as the mass distribution calculated from gravitational lensing effects and therefore – indirectly – the dark matter (blue). 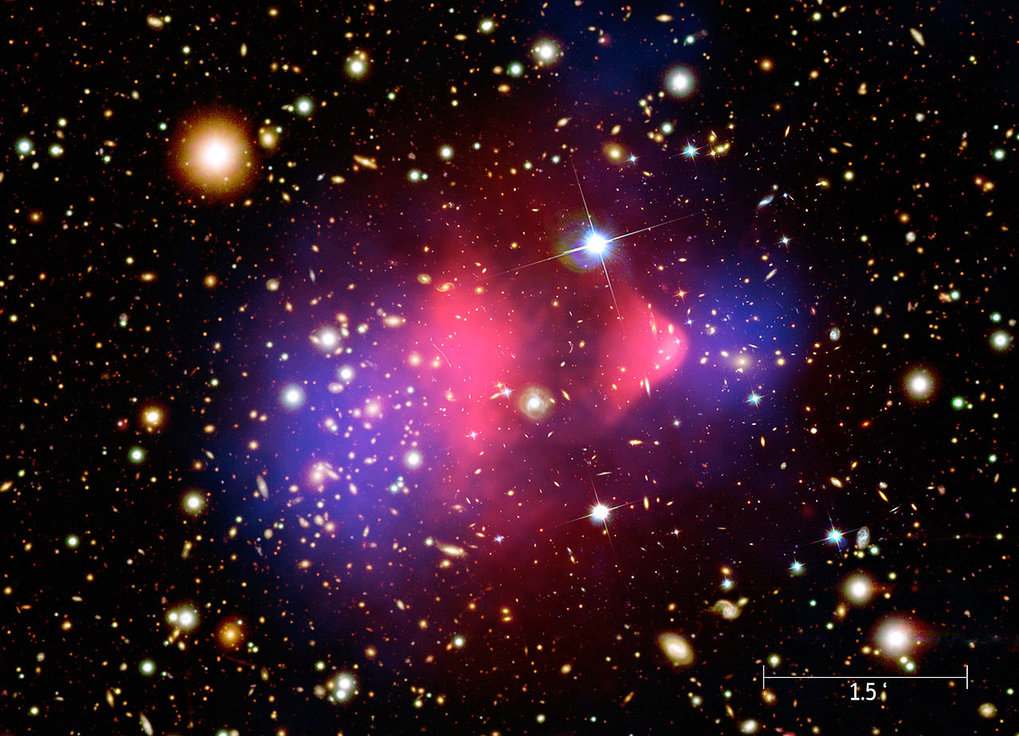 The standard model of particle physics encompasses the building blocks of matter and the forces that hold them together. It states that there are six different quarks and six leptons that are grouped into three “families”. However, the matter around us and we ourselves are ultimately made up of only three particles from the first family: the up and down quarks and the electron, which is a member of the lepton family.

Until now, this long-established standard model has remained unchanged. The Large Hadron Collider (LHC) at CERN in Geneva was brought into service around ten years ago with the main purpose of exploring what might lie beyond. However, after ten years of taking data scientists have failed to detect any new elementary particles, apart from the Higgs boson, despite widely held expectations to the contrary. In other words, until now, measurements with the LHC have failed to provide any hints whatsoever of “new physics” beyond the standard model. These findings stand in stark contrast to numerous proposed extensions of this model that suggest a large number of new particles.

In an earlier article published in Physical Review Letters, Hermann Nicolai and Krzysztof Meissner have presented a new hypothesis that seeks to explain why only the already known elementary particles occur as basic building blocks of matter in Nature – and why, contrary to what was previously thought, no new particles are to be expected in the energy range accessible to current or conceivable future experiments.

In addition, the two researchers postulate the existence of supermassive gravitinos, which could be highly unusual candidates for dark matter. In a second publication, which recently appeared in the journal Physical Review D, they also set out a proposal for how to track these gravitinos down.

In their work, Nicolai and Meissner take up an old idea from the Nobel Prize winner Murray Gell-Mann that is based on the “N=8 Supergravity” theory. One key element of their proposal is a new type of infinite-dimensional symmetry that is intended to explain the observed spectrum of the known quarks and leptons in three families. “Our hypothesis actually produces no additional particles for ordinary matter that would then need to be argued away because they do not show up in accelerator experiments,” says Hermann Nicolai. “By contrast, our hypothesis can in principle explain precisely what we see, in particular the replication of quarks and leptons in three families.”

However, processes in the cosmos cannot be explained entirely by the ordinary matter that we are already aware of. One sign of this are galaxies: they rotate at a high speed, and the visible matter in the universe – which only accounts for about 5% of the matter in the universe – would not be enough to hold them together. So far, however, no one knows what the rest is made of, despite numerous suggestions. The nature of dark matter is therefore one of the most important unanswered questions in cosmology.

“The common expectation is that dark matter is made up of an elementary particle, and that it hasn’t been possible to detect this particle yet because it interacts with ordinary matter almost exclusively by the gravitational force,” says Hermann Nicolai. The model developed in collaboration with Krzysztof Meissner offers a new candidate for a dark-matter particle of this kind, albeit one with completely different properties from all of the candidates discussed so far, such as axions or WIMPs. The latter interact only very weakly with known matter. The same holds true for the very light gravitinos that have been repeatedly proposed as dark matter candidates in connection with low energy supersymmetry. However, the present proposal goes in a completely different direction, in that it no longer assigns a primary role to supersymmetry, even though the scheme descends from maximal N=8 supergravity. “In particular, our scheme predicts the existence of superheavy gravitinos, which – unlike the usual candidates and unlike the previously considered light gravitinos – would also interact strongly and electromagnetically with ordinary matter,” says Hermann Nicolai.

Their large mass means that these particles could only occur in very dilute form in the universe; otherwise, they would `overclose’ the universe and thus lead to its early collapse. According to the Max Planck researcher, one actually wouldn’t need very many of them to explain the dark matter content in the universe and in our galaxy – one particle per 10,000 cubic kilometres would be sufficient.

The mass of the particle postulated by Nicolai and Meissner lies in the region of the Planck mass – that is, around a hundred millionth of a kilogram. In comparison, protons and neutrons – the building blocks of the atomic nucleus – are around ten quintillion (ten million trillion) times lighter. In intergalactic space, the density would be even much lower.

“The stability of these heavy gravitinos hinges on their unusual quantum numbers (charges),” says Nicolai. “Specifically, there are quite simply no final states with the corresponding charges in the standard model into which these gravitinos could decay – otherwise, they would have disappeared shortly after the Big Bang.”

Their strong and electromagnetic interactions with known matter may make these dark matter particles easier to track down despite their extreme rarity. One possibility is to search for them with dedicated time-of-flight measurements deep underground, as these particles move a great deal slower than the speed of light, unlike ordinary elementary particles originating from cosmic radiation. Nevertheless, they would penetrate the Earth without effort because of their large mass – like a cannon ball that cannot be stopped by a swarm of mosquitoes.

This fact gives the researchers the idea of using our planet itself as a “paleo-detector”: the Earth has been orbiting through interplanetary space for some 4.5 billion years, during which time it must have been penetrated by many of these massive gravitinos. In the process, the particles should have left long, straight ionisation tracks in the rock, but it may not be easy to distinguish them from tracks caused by known particles.

“Ionising radiation is known to cause lattice defects in crystal structures. It may be possible to detect relics of such ionisation tracks in crystals that remain stable over millions of years,” says Hermann Nicolai. Because of its long “exposure time” such a search strategy could also be successful in case dark matter is not homogeneously distributed inside galaxies but subject to local density fluctuations – which could also explain the failure of searches for more conventional dark matter candidates so far.