Researchers digging at the University of North Carolina at Charlotte's ongoing archaeological excavation on Mount Zion in Jerusalem have announced a second significant discovery from the 2019 season - clear evidence of the Babylonian conquest of the city from 587/586 BCE.

The discovery is of a deposit including layers of ash, arrowheads dating from the period, as well as Iron Age potsherds, lamps and a significant piece of period jewelry - a gold and silver tassel or earring. There are also signs of a significant Iron Age structure in the associated area, but the building, beneath layers from later periods, has yet to be excavated.

This is one of the Scythian type arrowheads found in the destruction layer from 587/586 BCE. 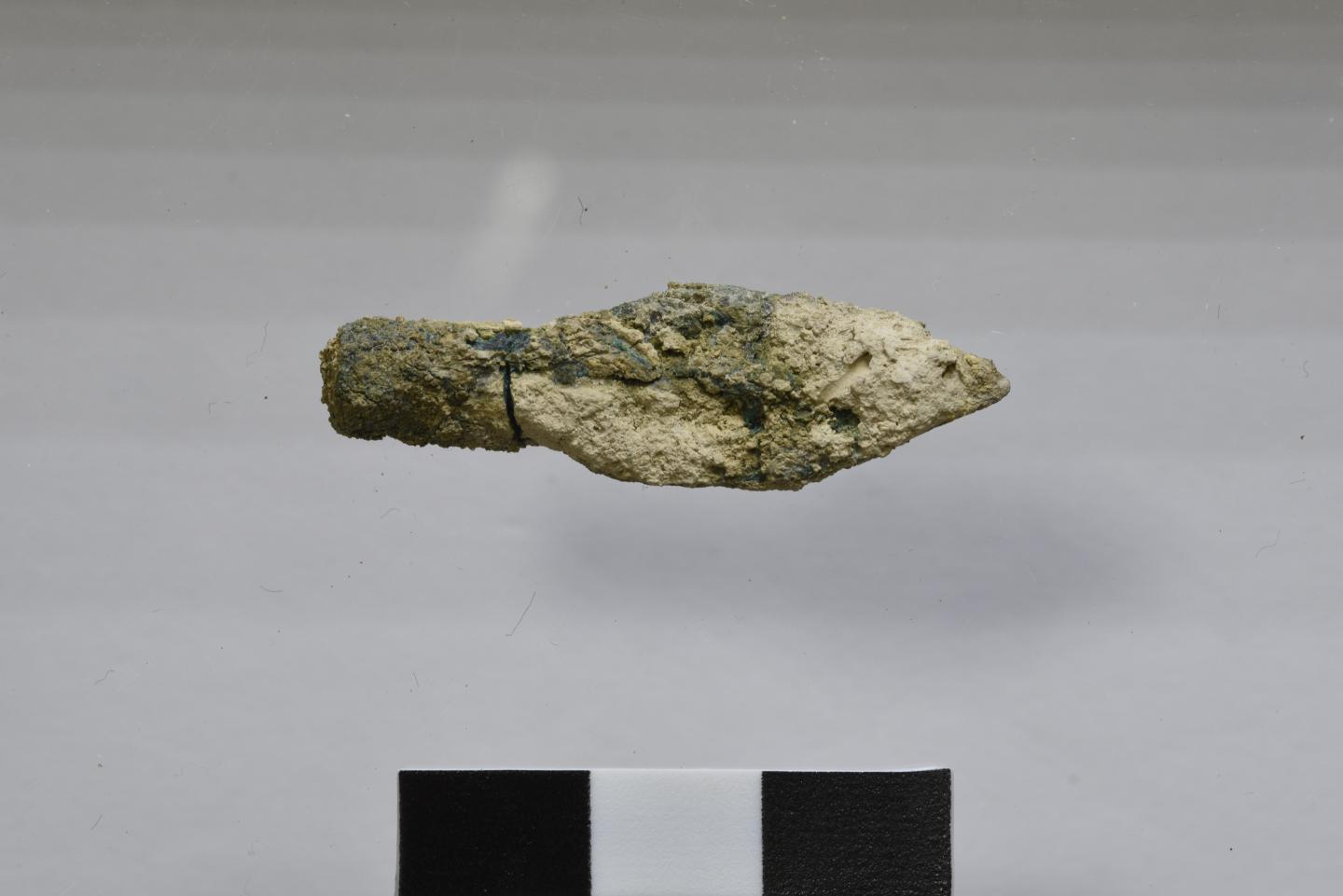 
The Mount Zion Archaeological Project, co-directed by UNC Charlotte professor of history Shimon Gibson, Rafi Lewis, a senior lecturer at Ashkelon Academic College and a fellow of Haifa University, and James Tabor, UNC Charlotte professor of religious studies, has been in operation for over a decade and has made numerous significant finds relating to the ancient city's many historical periods, including the announcement made in July, 2019 on evidence concerning the sack of the city during the First Crusade. The current find is one of the oldest and perhaps the most prominent in its historical significance, as the Babylonian conquest of Jerusalem is a major moment in Jewish history.

The team believes that the newly-found deposit can be dated to the specific event of the conquest because of the unique mix of artifacts and materials found -- pottery and lamps, side-by-side with evidence of the Babylonian siege represented by burnt wood and ashes, and a number of Scythian-type bronze and iron arrowheads which are typical of that period.


This is an earring or tassle ornament made of gold and silver from the destruction layer of 587/586 BCE. 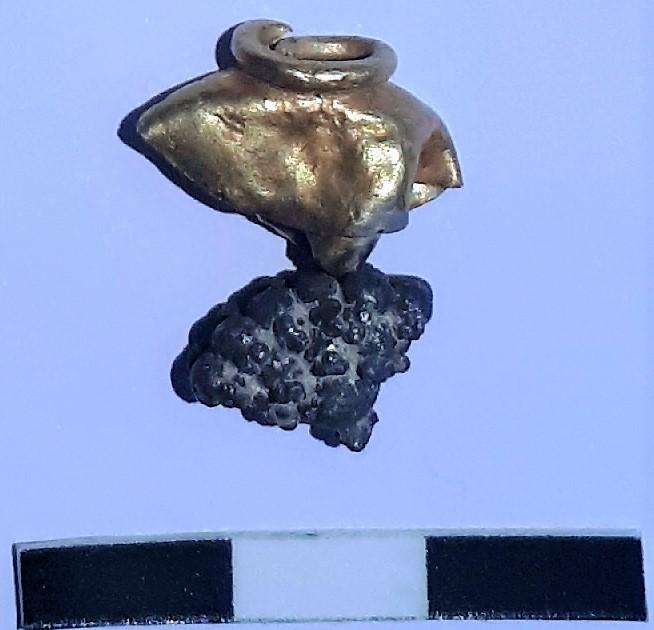 
Because of the site's location, various alternative explanations for the artifacts can be eliminated, the researchers argue. "We know where the ancient fortification line ran," noted Gibson, "so we know we are within the city. We know that this is not some dumping area, but the south-western neighborhood of the Iron Age city - during the 8th century BCE the urban area extended from the "City of David" area to the south-east and as far as the Western Hill where we are digging."

The ash deposits, similarly, are not conclusive evidence of the Babylonian attack in themselves, but are much more so in the context of other materials.

"For archaeologists, an ashen layer can mean a number of different things," Gibson said. "It could be ashy deposits removed from ovens; or it could be localized burning of garbage. However, in this case, the combination of an ashy layer full of artifacts, mixed with arrowheads, and a very special ornament indicates some kind of devastation and destruction. Nobody abandons golden jewelry and nobody has arrowheads in their domestic refuse."

"The arrowheads are known as 'Scythian arrowheads' and have been found at other archaeological conflict sites from the 7th and 6th centuries BCE. They are known at sites outside of Israel as well. They were fairly commonplace in this period and are known to be used by the Babylonian warriors. Together, this evidence points to the historical conquest of the city by Babylon because the only major destruction we have in Jerusalem for this period is the conquest of 587/586 BCE," he said.

The clay artifacts also help date the discovery. The lamps, Gibson notes, are the typical high-based pinched lamps of the period.

This is one of the students of UNC Charlotte's Levine Program, Miles Shen, holding in his hands a lamp dating from the Iron Age. 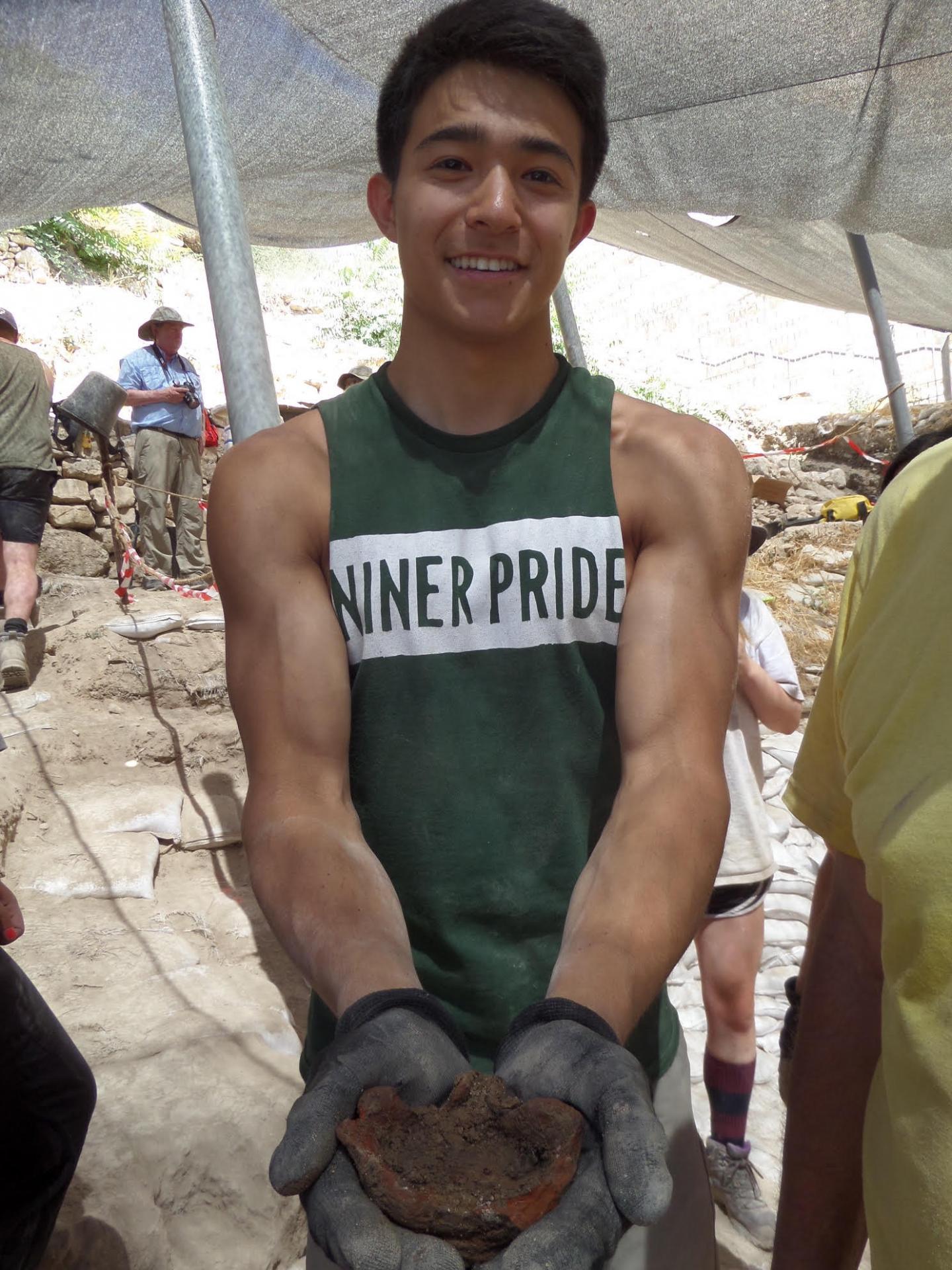 "It's the kind of jumble that you would expect to find in a ruined household following a raid or battle," Gibson said. "Household objects, lamps, broken bits from pottery which had been overturned and shattered... and arrowheads and a piece of jewelry which might have been lost and buried in the destruction."

"Frankly, jewelry is a rare find at conflict sites, because this is exactly the sort of thing that attackers will loot and later melt down."

"I like to think that we are excavating inside one of the 'Great Man's houses' mentioned in the second book of Kings 25:9," Gibson speculated. "This spot would have been at an ideal location, situated as it is close to the western summit of the city with a good view overlooking Solomon's Temple and Mount Moriah to the north-east. We have high expectations of finding much more of the Iron Age city in future seasons of work. "

The building that is apparently part of the layer remains unexcavated. "One might ask why haven't we excavated the whole building?" Gibson said. "The reason is that we are slowly taking the site down, level by level, period by period, and at the end of this last digging season two meters of domestic structures from later Byzantine and Roman periods have still to be dug above the Iron Age level below. We plan to get down to it in the 2020 season."

The unexpected and rare piece of jewelry found is apparently a tassel or earring, with a bell-shaped gold upper part. Clasped beneath is a silver part made in the shape of a cluster of grapes. Gibson noted that this discovery of jewelry "is a unique find and it is a clear indication of the wealth of the inhabitants of the city at the time of the siege." The only other discovery of jewelry in Jerusalem from this period was made many years ago in 1979 in an Iron Age tomb at Ketef Hinnom outside the city.

The researchers say that finding evidence of a critical historical event is what makes the discovery particularly exciting. Lewis, another co-director of the project, explained that "It is very exciting to be able to excavate the material signature of any given historical event, and even more so regarding an important historical event such as the Babylonian siege of Jerusalem."

By all accounts the Babylonian conquest of the city by the Neo-Babylonian king Nebuchadnezzar was ferocious and resulted in a great loss of life, with the razing of the city and the burning of houses, and the plundering and dismantling of King Solomon's Temple to God. The local ruler of the Kingdom of Judah, King Zedekiah, made an attempt to flee the city with his retinue, but was eventually caught and taken captive to Babylon.

The Hebrew Bible relates the famine and suffering that the inhabitants of Jerusalem suffered during the lengthy Babylonian siege of the city: "So the city was besieged unto the eleventh year of King Zedekiah. On the ninth day of the [fourth] month the famine was sore in the city, so that there was no bread for the people of the land. Then a breach was made in the city, and all the men of war [fled] by night by the way of the gate between the two walls.... And he [Nebuzaradan, the Babylonian captain of the guard] burnt the house of the Lord, and the King's house; and all the houses of Jerusalem, even every great man's house, burnt he with fire." (2 Kings 25: 1-9).

The Babylonian siege of Jerusalem lasted for quite a while even though many of the inhabitants wanted to give up. "King Zedekiah simply was not willing to pay tribute to Nebuchadnezzar and the direct result of this was the destruction of the city and the Temple", said Gibson.

Every year religious Jews in Jerusalem and across the world pray and fast in remembrance of the destruction of the Jewish Temple to God in Jerusalem, first by the Babylonians in 587/586 BCE, resulting in the exile of the inhabitants of the city to Babylon, and yet again in 70 CE at the hands of the Roman legions led by Titus. To remember the devastating destruction of the Temple, Jews gather in synagogues around the world and at the Western Wall plaza in Jerusalem, to pray and mourn on Tisha B' Av (the ninth day in the Hebrew month of Av) according to the Jewish calendar, which falls this year on August 11th.

The Mount Zion archaeological project is directed by Shimon Gibson and James Tabor from the College of Liberal and Arts Studies at the University of North Carolina at Charlotte, in conjunction with Rafi Lewis of Ashkelon Academic College and Haifa University, and with sponsorship from Aron Levy, John Hoffmann, Cherylee and Ron Vanderham, and Patty and David Tyler and others, and facilitated by Sheila Bishop for The Foundation for Biblical Archaeology.

The dig is also staffed by a host of volunteers, including UNC Charlotte students. The project has been a favorite summer activity of for many of UNC Charlotte's Levine Scholars Program, the university's highly selective national program for undergraduate scholars.

"Participating in the Mount Zion dig has been an amazing opportunity for the Levine Scholars," said Diane Zablotsky, director of UNC Charlotte's Levine Scholars Program. "Although they are from different backgrounds and study in different majors, they shared a unique experience that left them with a deep appreciation of archaeology, the history of Jerusalem, and broadened worldview."

The site is within the "Sovev Homot" park administered by the Israel Nature and Parks Authority. Other substantial remains of the multi-period ancient city were uncovered during the 2019 season, including vaulted basements from the time of Herod the Great, a Byzantine street which was the south-westerly continuation of the main city street known as the Cardo Maximus, and a sunken defense ditch that ran in front of the fortifications which greeted the Crusader's when they attacked Jerusalem in 1099 and hindered their assault on the city.

The complex architectural sequence of superimposed structures dating back 3000 years or so is being carefully mapped by a team of recorders and draftsmen headed by Steve Patterson. The University of North Carolina at Charlotte has been conducting archaeological excavations in Jerusalem since 2006 and much vital historical and archaeological information has been steadily extracted from the digging operations.