Engineers have designed a new system that can help cool buildings in crowded metropolitan areas without consuming electricity, an important innovation at a time when cities are working to adapt to climate change.

The system consists of a special material — an inexpensive polymer/aluminum film — that’s installed inside a box at the bottom of a specially designed solar “shelter.” The film helps to keep its surroundings cool by absorbing heat from the air inside the box and transmitting that energy through the Earth’s atmosphere into outer space. The shelter serves a dual purpose, helping to block incoming sunlight, while also beaming thermal radiation emitted from the film into the sky.


The system helps cool its surroundings by absorbing heat from the air inside the box and transmitting that energy through the Earth's atmosphere into outer space. 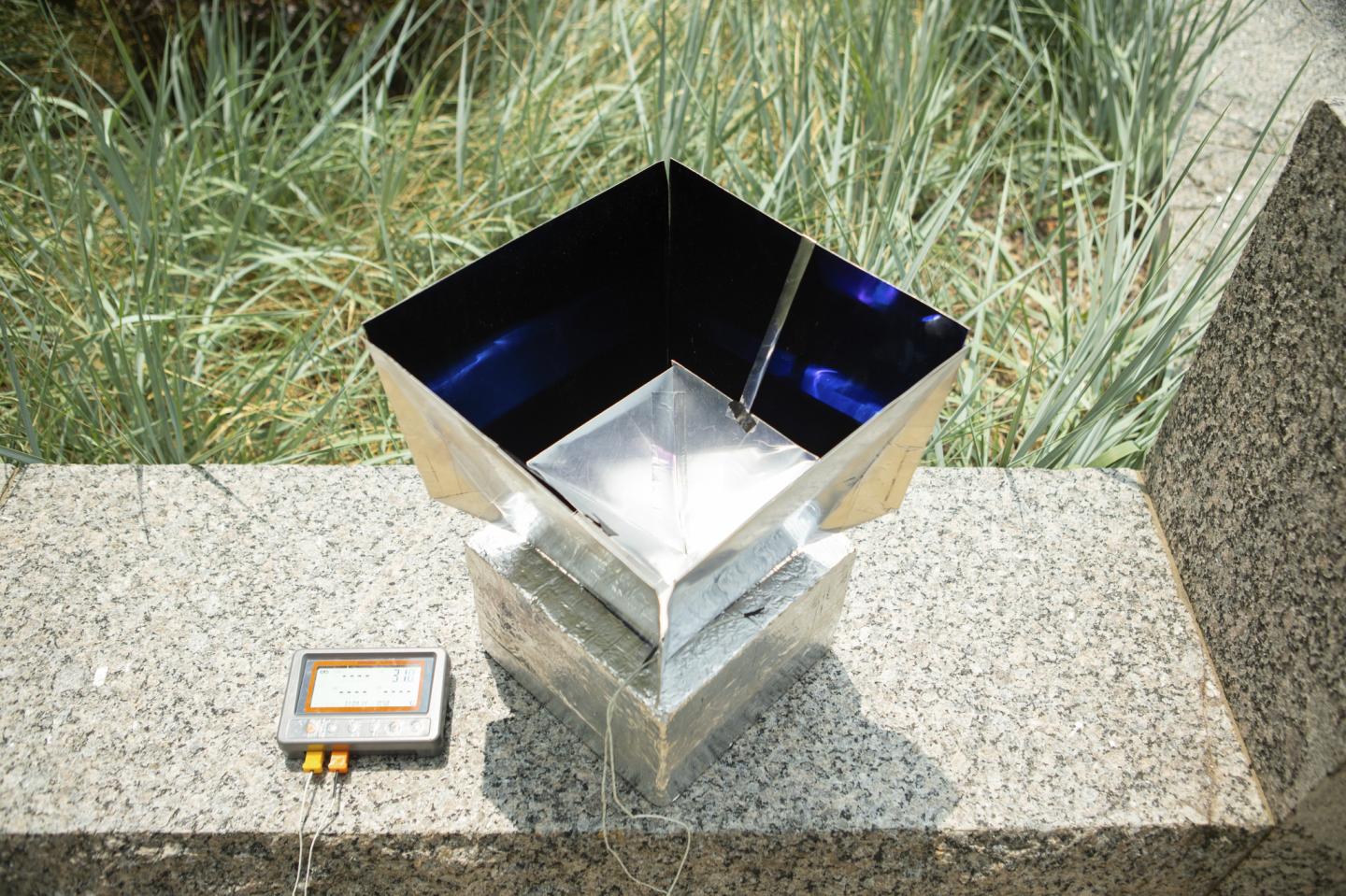 
“The polymer stays cool as it dissipates heat through thermal radiation, and can then cool down the environment,” says co-first author Lyu Zhou, a PhD candidate in electrical engineering in the University at Buffalo School of Engineering and Applied Sciences. “This is called radiative or passive cooling, and it’s very interesting because it does not consume electricity — it won’t need a battery or other electricity source to realize cooling.”

“One of the innovations of our system is the ability to purposefully direct thermal emissions toward the sky,” says lead researcher Qiaoqiang Gan, PhD, UB associate professor of electrical engineering. “Normally, thermal emissions travel in all directions. We have found a way to beam the emissions in a narrow direction. This enables the system to be more effective in urban environments, where there are tall buildings on all sides. We use low-cost, commercially available materials, and find that they perform very well.”

Taken together, the shelter-and-box system the engineers designed measures about 18 inches tall (45.72 centimeters), 10 inches wide and 10 inches long (25.4 centimeters). To cool a building, numerous units of the system would need to be installed to cover a roof.

The research will be published on Aug. 5 in Nature Sustainability. The study was an international collaboration between Gan’s group at UB, Boon Ooi’s group at King Abdullah University of Science and Technology (KAUST) in Saudi Arabia, and Zongfu Yu’s group at the University of Wisconsin–Madison. Along with Zhou, co-first authors are Haomin Song, PhD, UB assistant professor of research in electrical engineering, and Jianwei Liang at KAUST. The study was funded in part by the National Science Foundation.

A system that works during the day and in crowded environments

The new passive cooling system addresses an important problem in the field: How radiative cooling can work during the day and in crowded urban areas.

“During the night, radiative cooling is easy because we don’t have solar input, so thermal emissions just go out and we realize radiative cooling easily,” Song says. “But daytime cooling is a challenge because the sun is shining. In this situation, you need to find strategies to prevent rooftops from heating up. You also need to find emissive materials that don’t absorb solar energy. Our system address these challenges.”

One of the central components is the polymer/metal film, which is made from a sheet of aluminum coated with a clear polymer called polydimethylsiloxane. The aluminum reflects sunlight, while the polymer absorbs and dissipates heat from the surrounding air.

Engineers placed the material at the bottom of a foam box and erected a solar “shelter” atop the box, using a solar energy-absorbing material to construct four outward-slanting walls, along with an inverted square cone within those walls.

This architecture serves a dual purpose: First, it helps to sponge up sunlight. Second, the shape of the walls and cone direct heat emitted by the film toward the sky.

“If you look at the headlight of your car, it has a certain structure that allows it to direct the light in a certain direction,” Gan says. “We follow this kind of a design. The structure of our beam-shaping system increases our access to the sky. The ability to direct the emissions improves the performance of the system in crowded areas.”