NASA’s Chandra X-ray Observatory has captured many spectacular images of cosmic phenomena over its two decades of operations, but perhaps its most iconic is the supernova remnant Cassiopeia A.

Located about 11,000 light-years from Earth, Cas A (as it’s nicknamed) is the glowing debris field left behind after a massive star exploded. When the star ran out of fuel, it collapsed onto itself and blew up as a supernova, possibly briefly becoming one of the brightest objects in the sky. (Although astronomers think that this happened around the year 1680, there are no verifiable historical records to confirm this.) 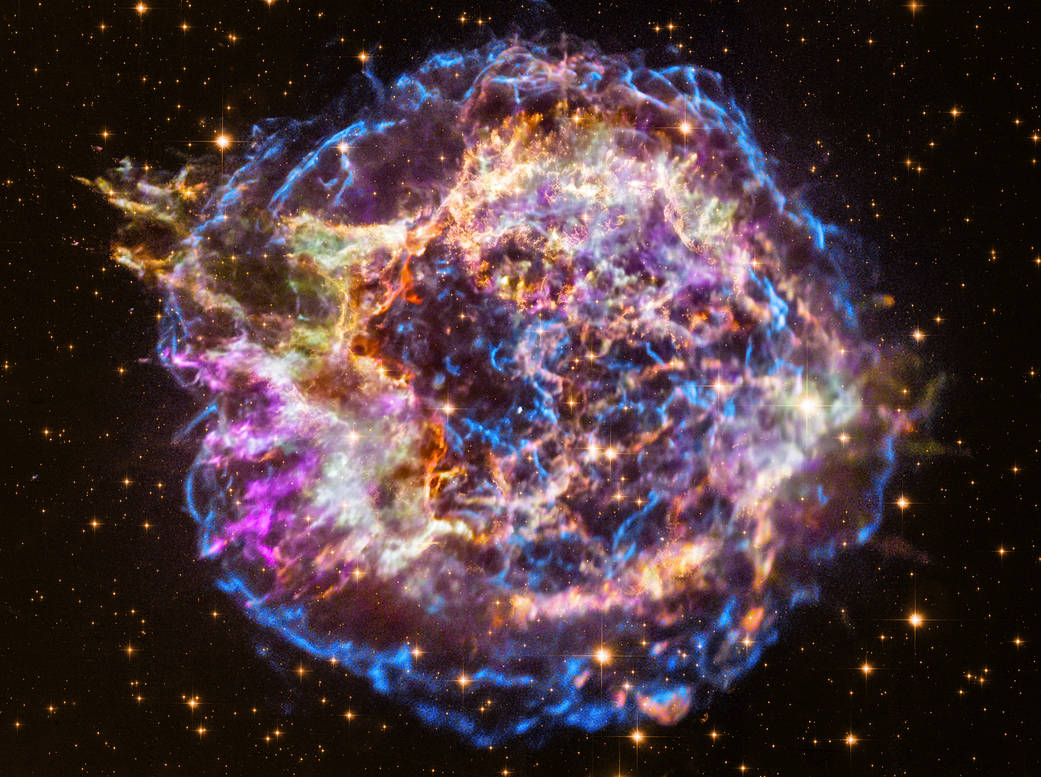 The shock waves generated by this blast supercharged the stellar wreckage and its environment, making the debris glow brightly in many types of light, particularly X-rays. Shortly after Chandra was launched aboard the Space Shuttle Columbia on July 23, 1999, astronomers directed the observatory to point toward Cas A. It was featured in Chandra's official “First Light” image, released Aug. 26, 1999, and marked a seminal moment not just for the observatory, but for the field of X-ray astronomy. Near the center of the intricate pattern of the expanding debris from the shattered star, the image revealed, for the first time, a dense object called a neutron star that the supernova left behind.

Since then, Chandra has repeatedly returned to Cas A to learn more about this important object. A new video shows the evolution of Cas A over time, enabling viewers to watch as incredibly hot gas – about 20 million degrees Fahrenheit – in the remnant expands outward. These X-ray data have been combined with data from another of NASA’s “Great Observatories,” the Hubble Space Telescope, showing delicate filamentary structures of cooler gases with temperatures of about 20,000 degrees Fahrenheit. Hubble data from a single time period are shown to emphasize the changes in the Chandra data.

The video shows Chandra observations of Cas A from 2000 to 2013. In that time, a child could enter kindergarten and graduate from high school. While the transformation might not be as apparent as that of a student over the same period, it is remarkable to watch a cosmic object change on human time scales.

The blue, outer region of Cas A shows the expanding blast wave of the explosion. The blast wave is composed of shock waves, similar to the sonic booms generated by a supersonic aircraft. These expanding shock waves produce X-ray emission and are sites where particles are being accelerated to energies that reach about two times higher than the most powerful accelerator on Earth, the Large Hadron Collider. As the blast wave travels outwards at speeds of about 11 million miles per hour, it encounters surrounding material and slows down, generating a second shock wave – called a “reverse shock” – that travels backwards, similar to how a traffic jam travels backwards from the scene of an accident on a highway.

These reverse shocks are usually observed to be faint and much slower moving than the blast wave. However, a team of astronomers led by Toshiki Sato from RIKEN in Saitama, Japan, and NASA’s Goddard Space Flight Center, have reported reverse shocks in Cas A that appear bright and fast moving, with speeds between about 5 and 9 million miles per hour. These unusual reverse shocks are likely caused by the blast wave encountering clumps of material surrounding the remnant, as Sato and team discuss in their 2018 study. This causes the blast wave to slow down more quickly, which re-energizes the reverse shock, making it brighter and faster. Particles are also accelerated to colossal energies by these inward moving shocks, reaching about 30 times the energies of the LHC.

This recent study of Cas A adds to a long collection of Chandra discoveries over the course of the telescope’s 20 years. In addition to finding the central neutron star, Chandra data have revealed the distribution of elements essential for life ejected by the explosion, have constructed a remarkable three dimensional model of the supernova remnant, and much more.

Scientists also created a historical record in optical light of Cas A using photographic plates from the Palomar Observatory in California from 1951 and 1989 that had been digitized by the Digitized Access to a Sky Century @ Harvard (DASCH) program, located at the Center for Astrophysics | Harvard & Smithsonian (CfA). These were combined with images taken by the Hubble Space Telescope between 2000 and 2011. This long-term look at Cas A allowed astronomers Dan Patnaude of CfA and Robert Fesen of Dartmouth College to learn more about the physics of the explosion and the resulting remnant from both the X-ray and optical data.

This recent study of Cas A adds to a long collection of Chandra discoveries over the course of the telescope’s 20 years. In addition to finding the central neutron star, Chandra data have revealed the distribution of elements essential for life ejected by the explosion, clues about the details of how the star exploded, and much more.