The lake was thought to be the site of an ancient catastrophic event that left several hundred people dead, but the first ancient whole genome data from India shows that diverse groups of people died at the lake in multiple events approximately 1000 years apart. 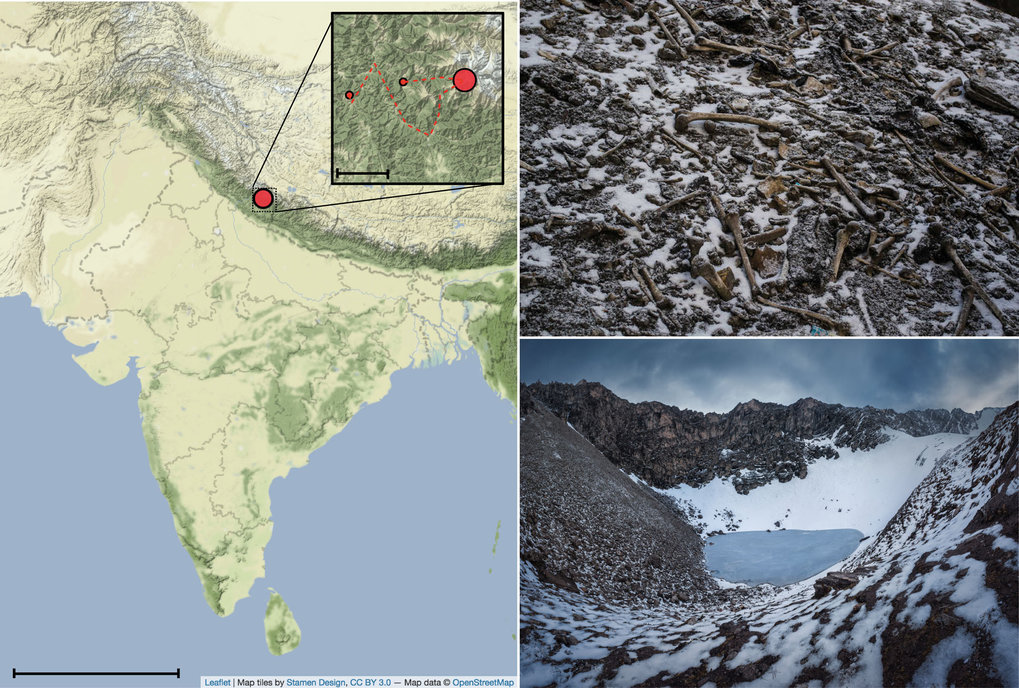 
A large-scale study conducted by an international team of scientists has revealed that the mysterious skeletons of Roopkund Lake – once thought to have died during a single catastrophic event – belong to genetically highly distinct groups that died in multiple periods in at least two episodes separated by one thousand years. The study, published this week in Nature Communications, involved an international team of 28 researchers from institutions in India, the United States and Europe.

Situated at over 5000 meters above sea-level in the Himalayan Mountains of India, Roopkund Lake has long puzzled researchers due to the presence of skeletal remains from several hundred ancient humans, scattered in and around the lake’s shores, earning it the nickname Skeleton Lake or Mystery Lake. "Roopkund Lake has long been subject to speculation about who these individuals were, what brought them to Roopkund Lake, and how they died," says senior author Niraj Rai, of the Birbal Sahni Institute of Palaeosciences in Lucknow, India, who began working on the Roopkund skeletons when he was a post-doctoral scientist at the CSIR Centre for Cellular and Molecular Biology (CCMB) in Hyderabad, India.

The current publication, the final product of a more than decade-long study that presents the first whole genome ancient DNA data from India, reveals that the site has an even more complex history than imagined.

Ayushi Nayak preparing samples for analysis in the Stable Isotope Laboratory at the Max Planck Institute for the Science of Human History. The Photo is a screen grab from the video "Sampling and Pretreatment of Tooth Enamel Carbonate for Stable Carbon and Oxygen Isotope Analysis" which can be found at: www.shh.mpg.de/1032332 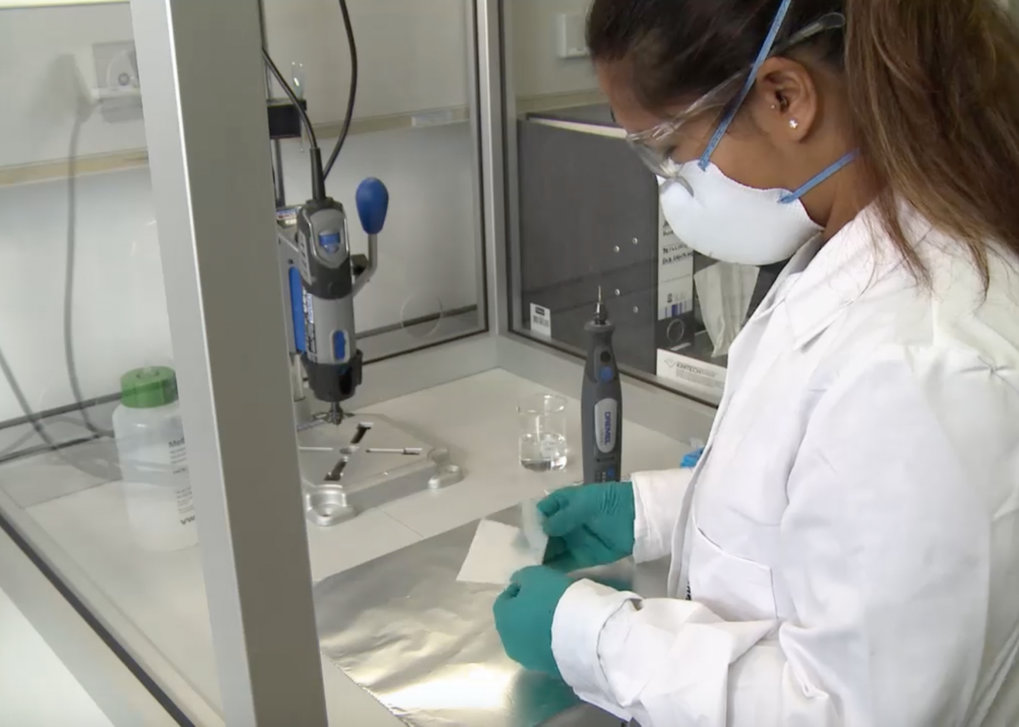 Ancient DNA obtained from the skeletons of Roopkund Lake – representing the first ancient DNA ever reported from India – reveals that they derive from at least three distinct genetic groups. "We first became aware of the presence of multiple distinct groups at Roopkund after sequencing the mitochondrial DNA of 72 skeletons. While many of the individuals possessed mitochondrial haplogroups typical of present-day Indian populations, we also identified a large number of individuals with haplogroups that would be more typical of populations from West Eurasia," says co-senior author Kumarasamy Thangaraj of CCMB, who started the project more than a decade ago, in an ancient DNA clean lab that he and then-director of CCMB Lalji Singh (deceased) built to study Roopkund.

Whole genome sequencing of 38 individuals revealed that there were at least three distinct groups among the Roopkund skeletons. The first group is composed of 23 individuals with ancestries that are related to people from present-day India, who do not appear to belong to a single population, but instead derived from many different groups. Surprisingly, the second largest group is made up of 14 individuals with ancestry that is most closely related to people who live in the eastern Mediterranean, especially present-day Crete and Greece. A third individual has ancestry that is more typical of that found in Southeast Asia. "We were extremely surprised by the genetics of the Roopkund skeletons. The presence of individuals with ancestries typically associated with the eastern Mediterranean suggests that Roopkund Lake was not just a site of local interest, but instead drew visitors from across the globe," says first-author Éadaoin Harney of Harvard University.

Stable isotope dietary reconstruction of the skeletons also supports the presence of multiple distinct groups. "Individuals belonging to the Indian-related group had highly variable diets, showing reliance on C­3 and C4 derived food sources. These findings are consistent with the genetic evidence that they belonged to a variety of socioeconomic groups in South Asia," says co-senior author Ayushi Nayak of the Max Planck Institute for the Science of Human History. "In contrast, the individuals with eastern Mediterranean-related ancestry appear to have consumed a diet with very little millet."

Two major groups at Roopkund Lake date to 1000 years apart, with the more recent around 1800 AD

The findings also revealed a second surprise about the skeletons of Roopkund Lake. Radiocarbon dating indicates that the skeletons were not deposited at the same time, as previously assumed. Instead, the study finds that the two major genetic groups were actually deposited approximately 1000 years apart. First, during the 7th-10th centuries CE, individuals with Indian-related ancestry died at Roopkund, possibly during several distinct events. It was not until sometime during the 17th-20th centuries that the other two groups, likely composed of travelers from the eastern Mediterranean and Southeast Asia arrived at Roopkund Lake. “This finding shows the power of radiocarbon dating, as it had previously been assumed that the skeletons of Roopkund Lake were the result of a single catastrophic event,” says co-senior author Douglas J. Kennett of the University of California, Santa Barbara.

"It is still not clear what brought these individuals to Roopkund Lake or how they died," says Rai. “We hope that this study represents the first of many analyses of this mysterious site."

"Through the use of biomolecular analyses, such as ancient DNA, stable isotope dietary reconstruction, and radiocarbon dating, we discovered that the history of Roopkund Lake is more complex than we ever anticipated, and raises the striking question of how migrants from the eastern Mediterranean, who have an ancestry profile that is extremely atypical of the region today, died in this place only a few hundred years ago," concludes co-senior author David Reich of Harvard Medical School. "This study highlights the power of biomolecular tools to provide unexpected insights into our past.


Contacts and sources:
Anne Gibson
The Max Planck Institute for the Science of Human History (MPI-SHH)