Whole Ecosystems Shifting Hundreds of Miles to the North

Whole ecosystems are shifting dramatically north in the Great Plains, a phenomenon likely linked to human influences such as climate change, says new University of Nebraska-Lincoln research that analyzed nearly 50 years' worth of data on bird distributions.

The northernmost ecosystem boundary shifted more than 365 miles north, with the southernmost boundary moving about 160 miles from the 1970 baseline.

University of Nebraska-Lincoln researchers (from left) Caleb Roberts, Craig Allen and Dirac Twidwell have found evidence that multiple ecosystems in the U.S. Great Plains have moved substantially northward during the past 50 years. 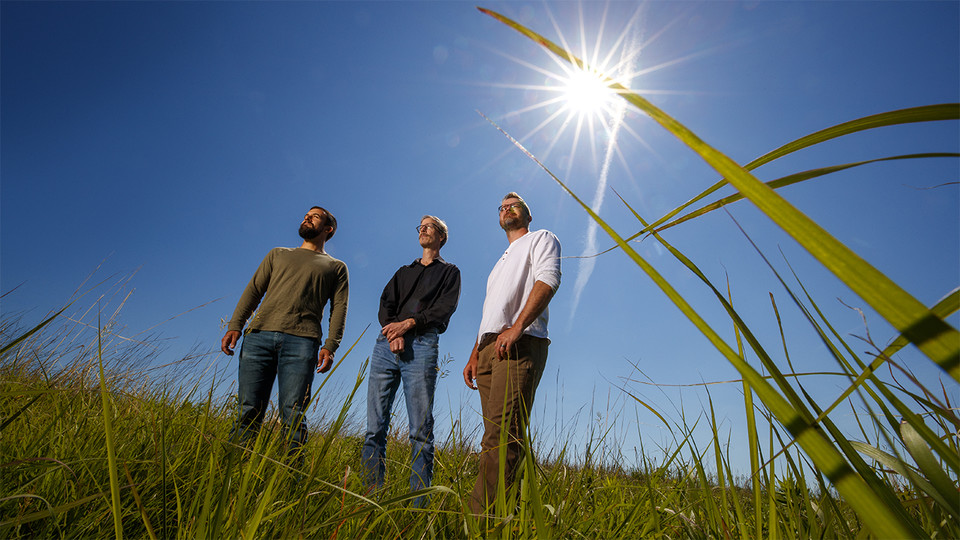 Credit: Craig Chandler | University Communication
.
The findings could inform the development of an early-warning system that would give land managers decades to prepare for ecosystem shift or collapse, allowing them to accommodate or foster the change rather than simply reacting, the researchers said.

But the team’s new study, published June 24 in the journal Nature Climate Change, managed to quantify the spatial component of that change for the first time. In doing so, it suggests that ecological responses are much more ordered and predictable than previously thought.

“If we can work toward prevention (of changes), we’re going to save ourselves so much money and time,” said Caleb Roberts, lead author and postdoctoral researcher at Nebraska. “We won’t have to worry about specific endangered species, perhaps, because we will be protecting the system they require.”

A data-backed illustration of three ecosystems (orange, yellow, blue) shifting northward across a swath of the Great Plains, with a fourth ecosystem (pink) emerging in the 2010s. 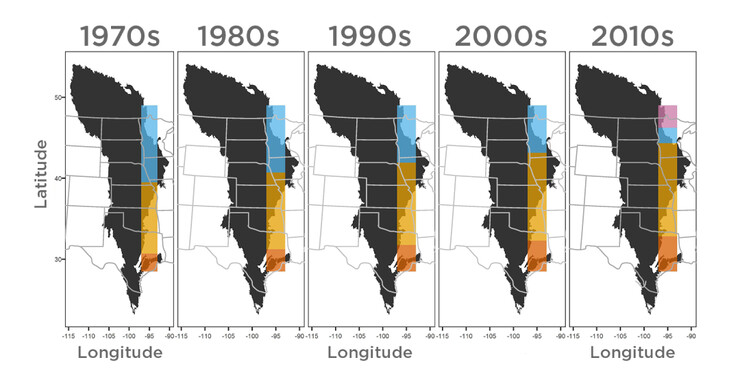 To arrive at their conclusions, the researchers analyzed 46 years’ worth of avian data collected for the North American Breeding Bird Survey, a U.S. Geological Survey program designed to track bird populations. That survey included more than 400 bird species found within a 250-mile-wide transect stretching from Texas to North Dakota.

The team then separated bird species into groups based on their body masses and searched for gaps in the distribution of the groups. Those gaps effectively act like the DNA signature of an ecosystem, said co-author Craig Allen, allowing the team to identify where one ecosystem ends and another begins.

By analyzing the geographic movement of the distinct body-mass signatures over the 46-year period, the team managed to measure how much and how fast each ecosystem shifted north.

“All (these breaks) are saying is that there are a lot of animals with the small body size; then there’s a gap with nothing in this middle body size; then you have another group and another group,” said Allen, director of the university’s Center for Resilience in Working Agricultural Landscapes. “And since these reflect the domains of scale in an ecosystem, it’s like a signature — the DNA — of a given ecosystem.”

Over their study area, and over time, the researchers identified three distinct ecosystem boundaries, with a fourth — and thus a fourth ecosystem regime — appearing in the final decade.

The fact that the northernmost boundary shifted more than its southernmost counterpart reflects a well-documented phenomenon known as Arctic amplification, suggesting that climate change is at play, the researchers said. But the movement also aligns with other global change drivers that include wildfire trends; the invasion of woody plants such as eastern red cedar trees; energy development; agricultural land conversion; and urbanization.

“Like most things in ecology, (these shifts) likely have multiple causations,” Allen said. “And I think it’s fairly intractable to try to separate, say, tree invasion from climate change, because it has to do with fire but also with changing climate. All of these things are highly related.”

Grasslands are the most endangered ecosystem in the world, Roberts said, partially due to woody-plant encroachment. That encroachment, he said, is something people can work to control by increasing burning, increasing tree removal and decreasing planting.

“Those are all things we can do and use the early warning to say, ‘We’re coming to the edge of this grassland’s resilience. It’s about to collapse, especially in our area. What can we do to stop that?’ That’s the kind of power this tool would have,” he said. “You don’t have to wait until it gets to you. You can see it coming and act pre-emptively.”

When land managers do wait until the problem arrives at their backdoor, Allen said, it’s often too late to alter the outcome. Given that urgency, the researchers plan to expand the range of their ecosystem analysis both east and west — potentially picking up forestlands and mountain ranges — while further clarifying how neighboring ecosystems move in relation to one another and in relation to global drivers.

Eventually, the researchers said, they intend to develop tools usable by land managers and conservationists ranging from private industry to the military.

“We are working closely with a long list of partners to understand how to navigate these types of transitions and increase the performance of conservation investments,” said Dirac Twidwell, associate professor of agronomy and horticulture. “Large-scale transitions should not be underestimated. Restoring what has been lost has proven extraordinarily difficult when the challenge spans large geographic regions.”

The research was conducted with support from the Department of Defense Strategic Environmental Research Development Program; Nebraska Game and Parks Commission; and the University of Nebraska-Lincoln’s Institute of Agriculture and Natural Resources. David Angeler, adjunct professor with the School of Natural Resources and also of the Swedish University of Agricultural Sciences, contributed to the study.