A survey reveals most college students are not aware that eating large amounts of tuna exposes them to neurotoxic mercury, and some are consuming more than recommended.

A surprising number of students eating in university dining halls have been helping themselves to servings of tuna well beyond the amounts recommended to avoid consuming too much mercury, a toxic heavy metal.

Researchers at UC Santa Cruz surveyed students outside of campus dining halls on their tuna consumption habits and knowledge of mercury exposure risks, and also measured the mercury levels in hair samples from the students. They found that hair mercury levels were closely correlated with how much tuna the students said they ate. And for some students, their hair mercury measurements were above what is considered a "level of concern."

Tuna and other large fish contain significant amounts of mercury in its most toxic form (methylmercury). In a survey of college students, half of the tuna eaters reported eating three or more tuna meals per week, potentially exceeding the EPA's "reference dose" for mercury. 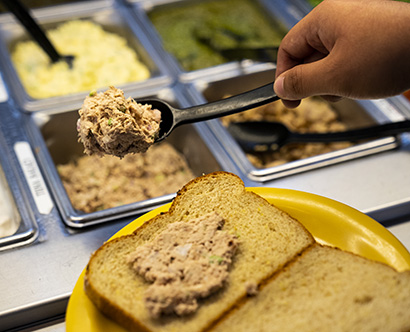 "It doesn't necessarily mean that they would be experiencing toxic effects, but it's a level at which it's recommended to try to lower your mercury exposure," said Myra Finkelstein, an associate adjunct professor of environmental toxicology at UC Santa Cruz. "Our results were consistent with other studies of mercury levels in hair from people who eat a lot of fish."

Tuna and other large fish contain significant amounts of mercury in its most toxic form (methylmercury), and exposure to high levels of methylmercury can cause neurological damage. Because of its effects on neurological development and reproductive health, concerns about mercury exposure are greatest for pregnant women and children. Finkelstein said college students should also limit their exposure to mercury because their nervous systems are still developing and they are of reproductive age.

She said the study was prompted by her experiences teaching students about mercury in the environment and hearing about how much tuna some students eat. "I've been dumbfounded when students have told me they eat tuna every day," Finkelstein said. "Their lack of knowledge about the risk of exposure to mercury is surprising."

Graduate student Yasuhiko Murata led the study and is first author of a paper on their findings, which has been accepted for publication in Environmental Toxicology and Chemistry and is available online. In the surveys, about a third of students reported weekly tuna consumption, and 80 percent of their tuna meals were at the campus dining halls, where tuna is regularly available from the salad bar. Half of the tuna eaters reported eating three or more tuna meals per week, potentially exceeding the "reference dose" established by the U.S. Environmental Protection Agency (EPA), considered a maximum safe level (0.1 micrograms of methylmercury per kilogram of body weight per day).

Before the results were published, Finkelstein discussed her team's findings with UCSC administrators who oversee the dining halls. New signs in the campus dining halls will now give students information about mercury in tuna and guidelines for fish consumption. Other changes may be made after a more thorough assessment, said William Prime, executive director of dining services.

Finkelstein said this issue could be a concern for all kinds of institutions with dining halls, especially those serving children, such as boarding schools. "Any time you have a dining hall situation where people are helping themselves, some residents may be eating way too much tuna," she said.

Nearly all fish contain some mercury, but tuna, especially the larger species, are known to accumulate relatively high levels of the toxic metal. Consumers are advised to eat no more than two to three servings per week of low-mercury fish (including skipjack and tongol tuna, often labeled "chunk light") or one serving per week of fish with higher levels of mercury (including albacore and yellow fin tuna).

Some of the students surveyed at UC Santa Cruz reported having more than 20 servings of tuna per week. The researchers analyzed the mercury content of the tuna being served in the dining halls, collecting samples periodically over several months, and found that the mercury content was variable, with some samples having five times as much mercury as others.

"Some chunk light tuna was actually quite high in mercury, although typically it has only half or one-third as much as albacore," Finkelstein said.

After conducting an initial survey and hair analysis, the researchers conducted a second survey with more detailed questions designed to probe students' knowledge about mercury in tuna and recommended consumption rates. Whether they were tuna eaters or not, most students had very little knowledge about this issue, Finkelstein said. A majority of students answered that it is safe to eat two to three times as much tuna per week as is recommended.

"It was not a large sample size, but only one out of 107 students surveyed had a high level of knowledge as well as confidence in that knowledge, so I think it's important to provide students with more information about safe levels of tuna consumption," she said.

Recommendations regarding consumption of tuna and other fish are complicated by the fact that fish is highly nutritious and contains beneficial omega-3 fatty acids and other nutrients. In addition, mercury concentrations vary widely among different types of fish. The U.S. Food and Drug Administration and EPA have issued advice on eating fish for pregnant women, parents, and caregivers of young children.

In addition to Myra Finkelstein and Yasuhiko Murata, the coauthors of the paper include Doreen Finkelstein, a social scientist and research analyst at Foothill College in Los Altos Hills who developed the survey questions, and Carl Lamborg, associate professor of ocean sciences at UC Santa Cruz.