These Ants Rescue Nestmates from Spiderwebs


It started out as a typical day at work for ant researcher Christina Kwapich.

Like other mornings, she set out before the sun came up to study Veromessor pergandei, a species of desert seed-foraging ants. On this day, she was counting the number of ants a colony needs to produce each year to survive.

When she did this, however, Kwapich, an Arizona State University School of Life Sciences postdoctoral research associate in Professor Bert Hölldobler’s lab, noticed something interesting about the ants’ behavior and realized she had never seen it before.

As the ants came out to forage at 4 a.m., so did the spiders. They would wander around through the desert until they discovered an ant trail, and then they would quickly build webs.

Ants rescue a nestmate that is trapped in a spiderweb while foraging. Some vertebrate species and small ant colonies will rescue each other, but only a couple of primate species are known to destroy the traps that ensnare them. 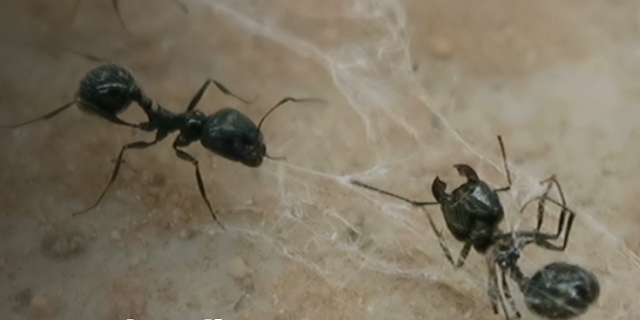 
What happened next really caught her eye: If an ant was trapped, other ants would gather around the web and tear it down to rescue the victim.

“I just started seeing these little disruptions in the trail and there was all this drama,” Kwapich said. “It was like taking down a circus tent or something. They’re pulling on the legs of the web and the spider is going crazy and running away. Once they get the web pulled apart, the ant is in this giant tangle of threads and they carry it back to the nest.”

New context for an old behavior

While rescue behavior has been recorded in wild populations, only two species of primates, which will tear apart human snare traps, have been shown to actually destroy the traps as these ants do. In addition, this rescue behavior typically occurs in animals with small colonies, such as bottlenose dolphins. Kwapich's research, which is published in The American Naturalist, is the first to record this behavior in a large colony.

Veromessor pergandei is one of the commonest ants in the Mojave and Sonoran deserts. 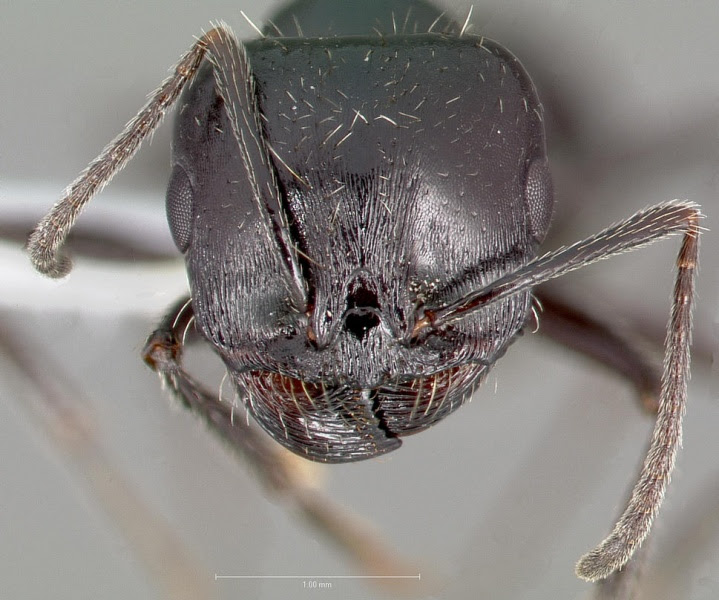 Credit; © AntWeb.org / CC-BY-SA-3.0
There are more than 16,000 ant species and rescue behavior has only been recorded in five, typically in smaller colonies, such as the Metabele ant, which produces only 13 new nestmates per day.

“The prevailing thought has been that if you have a very small society like chimpanzee group or some Atlantic bottlenose dolphins, then every individual in the group has a higher value,” Kwapich said. “So, if you have a group of 10 and you lose one, you lose 10% of your colony. That’s been true for many of the ants who show rescue behavior.”

But not this colony. These foraging ants produce more than 650 ants per day.

“Social rescue behavior is an astounding action in animal societies. Whenever such behavior is observed in social groups of vertebrates, for example in nonhuman primates or elephants, it causes a lot of excitement and may even be reported on national and international news channels,” said Hölldobler, a University Professor of Life Sciences at ASU. “Christina’s discovery of rescue behavior of foragers is exceptional because the number of foragers is tremendous. Foragers attempt and often succeed in freeing ensnarled nestmates and, in addition, remove the webs. This is an entirely new rescue behavior observed in social insects.”
Observing ants in a glass nest


To understand what was happening, Kwapich gathered up some of the ants and brought them back to the lab to observe them in an artificial glass nest. From there, she could see exactly how the ants dealt with the nests and what they did after rescuing a nestmate.

She observed some interesting behavior. First, she noticed that ants would only tear down a web if a nestmate was ensnared. These ants carry large seeds back to their nests. If one of these seeds gets stuck in a spider web, the ant will continue struggling to walk with that seed rather than give it up. However, it will never tear down the web.

Then, she observed that once an ant had been rescued, she is taken back to the colony, where the other ants gently remove the sticky web from her.

But what is the advantage of this meticulous effort they perform for one another — but not for large seeds. Understanding this ant species

The Veromessor pergandei ant species has a unique foraging strategy: They leave the nest in a large swarm and march together to their foraging destination.

“It looks like a black tube of toothpaste coming out of the hole. If you see if from a distance, you might think it’s a snake,” Kwapich said. “You have like 30,000 ants and they’re packed very close together, traveling together on this one column. It’s a really dense resource for predators, so obviously it attracts them, but it also allows the ants to be more defensive because they’re in really close proximity to each other.”

This means that if an ant is in trouble and sends out a chemical distress signal, nearby ants are likely to detect it and be able to help, in contrast to ants that forage alone.

In addition, these ants are sensitive to heat. In the summer months, this leaves a narrow foraging window. Thus, changing the direction of the foraging trail is not an option. It’s easier to tear down a spider web that blocks the path than change the path entirely.

However, Kwapich also discovered the ants can’t see the webs. They only know it exists once receiving a chemical signal from the trapped ant. Since a trapped seed may cost one ant a whole day of work, tearing down the web is important, but they can only do this if another ant uses its defense signal to alert the colony to the web.
Saving sisters

Another interesting characteristic of Veromessor pergandei is that their foragers are often different sizes, with some being much larger than others. When a distress signal occurs, the larger ants are more likely to respond and take on the task of destroying the web. Thus, they may be specialized ant body guards.

And once the ants are rescued, they are returned to the nest and meticulously cleaned by their sisters.

Why all that effort for a colony that produces 650 ants per day?

“Even though it’s a big society, every ant matters because they have a very limited foraging window. Because of the heat, sometimes they only forage two hours a day, in contrast to other ant species that can forage all day long or all night long,” Kwapich said. “That’s such a limited time to forage and they need to bring in so many resources for the queen to produce 600 ants a day. Temperature, time and their group foraging behavior constrain how much they can bring in. So individual workers are worth more in this society.”