Space: How Fast Is It Becoming More Vast? The New Measurement

Astronomers have made a new measurement of how fast the universe is expanding, using an entirely different kind of star than previous endeavors. The revised measurement, which comes from NASA's Hubble Space Telescope, falls in the center of a hotly debated question in astrophysics that may lead to a new interpretation of the universe's fundamental properties.

Scientists have known for almost a century that the universe is expanding, meaning the distance between galaxies across the universe is becoming ever more vast every second. But exactly how fast space is stretching, a value known as the Hubble constant, has remained stubbornly elusive.

Now, University of Chicago professor Wendy Freedman and colleagues have a new measurement for the rate of expansion in the modern universe, suggesting the space between galaxies is stretching faster than scientists would expect. Freedman's is one of several recent studies that point to a nagging discrepancy between modern expansion measurements and predictions based on the universe as it was more than 13 billion years ago, as measured by the European Space Agency's Planck satellite.

As more research points to a discrepancy between predictions and observations, scientists are considering whether they may need to come up with a new model for the underlying physics of the universe in order to explain it.

These galaxies are selected from a Hubble Space Telescope program to measure the expansion rate of the universe, called the Hubble constant. The value is calculated by comparing the galaxies' distances to the apparent rate of recession away from Earth (due to the relativistic effects of expanding space). By comparing the apparent brightnesses of the galaxies' red giant stars with nearby red giants, whose distances were measured with other methods, astronomers are able to determine how far away each of the host galaxies are. This is possible because red giants are reliable milepost markers because they all reach the same peak brightness in their late evolution. And, this can be used as a "standard candle" to calculate distance. Hubble's exquisite sharpness and sensitivity allowed for red giants to be found in the stellar halos of the host galaxies. The red giants were searched for in the halos of the galaxies. The center row shows Hubble's full field of view. The bottom row zooms even tighter into the Hubble fields. The red giants are identified by yellow circles. 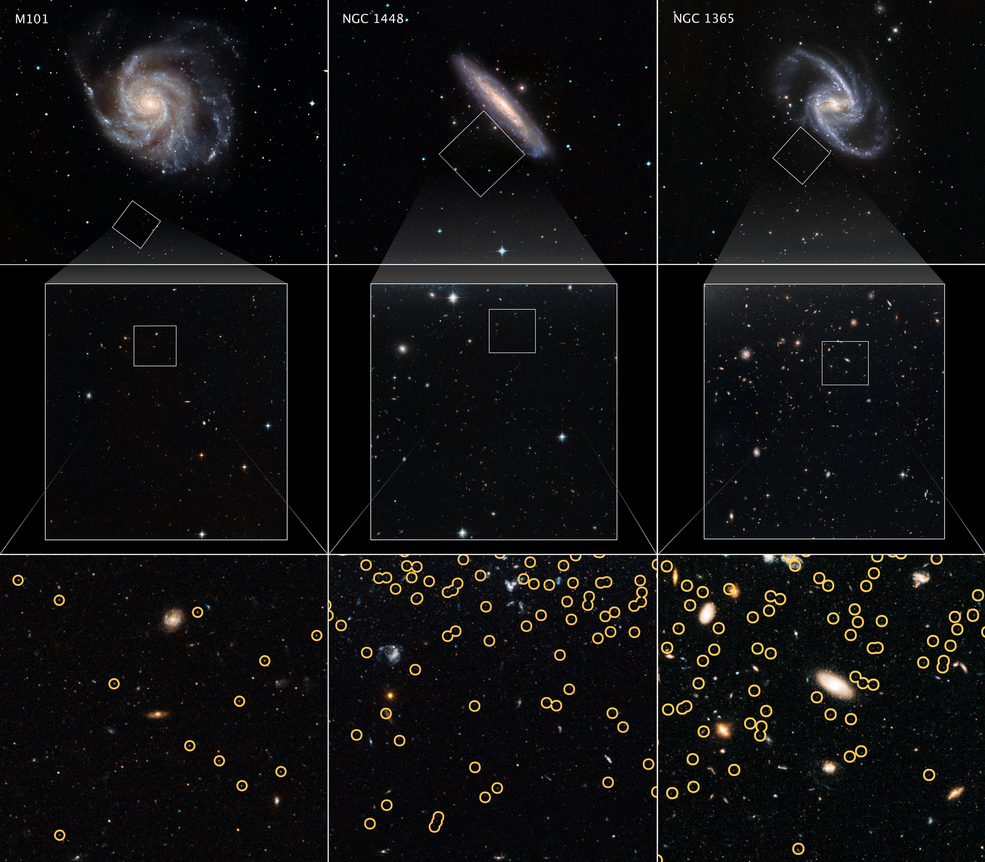 
"The Hubble constant is the cosmological parameter that sets the absolute scale, size and age of the universe; it is one of the most direct ways we have of quantifying how the universe evolves," said Freedman. "The discrepancy that we saw before has not gone away, but this new evidence suggests that the jury is still out on whether there is an immediate and compelling reason to believe that there is something fundamentally flawed in our current model of the universe.”

In a new paper accepted for publication in The Astrophysical Journal, Freedman and her team announced a new measurement of the Hubble constant using a kind of star known as a red giant. Their new observations, made using Hubble, indicate that the expansion rate for the nearby universe is just under 70 kilometers per second per megaparsec (km/sec/Mpc). One parsec is equivalent to 3.26 light-years distance.

This measurement is slightly smaller than the value of 74 km/sec/Mpc recently reported by the Hubble SH0ES (Supernovae H0 for the Equation of State) team using Cepheid variables, which are stars that pulse at regular intervals that correspond to their peak brightness. This team, led by Adam Riess of the Johns Hopkins University and Space Telescope Science Institute, Baltimore, Maryland, recently reported refining their observations to the highest precision to date for their Cepheid distance measurement technique.

How to Measure Expansion

A central challenge in measuring the universe's expansion rate is that it is very difficult to accurately calculate distances to distant objects.

But more recently, scientists took a very different approach: building a model based on the rippling structure of light left over from the big bang, which is called the Cosmic Microwave Background. The Planck measurements allow scientists to predict how the early universe would likely have evolved into the expansion rate astronomers can measure today. Scientists calculated a value of 67.4 km/sec/Mpc, in significant disagreement with the rate of 74.0 km/sec/Mpc measured with Cepheid stars.

Astronomers have looked for anything that might be causing the mismatch. "Naturally, questions arise as to whether the discrepancy is coming from some aspect that astronomers don't yet understand about the stars we're measuring, or whether our cosmological model of the universe is still incomplete," Freedman said. "Or maybe both need to be improved upon."

Freedman's team sought to check their results by establishing a new and entirely independent path to the Hubble constant using an entirely different kind of star.

Certain stars end their lives as a very luminous kind of star called a red giant, a stage of evolution that our own Sun will experience billions of years from now. At a certain point, the star undergoes a catastrophic event called a helium flash, in which the temperature rises to about 100 million degrees and the structure of the star is rearranged, which ultimately dramatically decreases its luminosity. Astronomers can measure the apparent brightness of the red giant stars at this stage in different galaxies, and they can use this as a way to tell their distance.

The Hubble constant is calculated by comparing distance values to the apparent recessional velocity of the target galaxies — that is, how fast galaxies seem to be moving away. The team's calculations give a Hubble constant of 69.8 km/sec/Mpc — straddling the values derived by the Planck and Riess teams.

"Our initial thought was that if there's a problem to be resolved between the Cepheids and the Cosmic Microwave Background, then the red giant method can be the tie-breaker," said Freedman.

But the results do not appear to strongly favor one answer over the other say the researchers, although they align more closely with the Planck results.

NASA's upcoming mission, the Wide Field Infrared Survey Telescope (WFIRST), scheduled to launch in the mid-2020s, will enable astronomers to better explore the value of the Hubble constant across cosmic time. WFIRST, with its Hubble-like resolution and 100 times greater view of the sky, will provide a wealth of new Type Ia supernovae, Cepheid variables, and red giant stars to fundamentally improve distance measurements to galaxies near and far.