Scientists have used precisely tuned pulses of laser light to film the ultrafast rotation of a molecule. The resulting “molecular movie” tracks one and a half revolutions of carbonyl sulphide (OCS) – a rod-shaped molecule consisting of one oxygen, one carbon and one sulphur atom – taking place within 125 trillionths of a second, at a high temporal and spatial resolution.

The team headed by DESY’s Jochen Küpper from the Center for Free-Electron Laser Science (CFEL) and Arnaud Rouzée from the Max Born Institute in Berlin are presenting their findings in the journal Nature Communications. CFEL is a cooperation of DESY, the Max Planck Society and Universität Hamburg.

\
The different stages of the molecule's periodic rotation repeat after about 82 picoseconds. 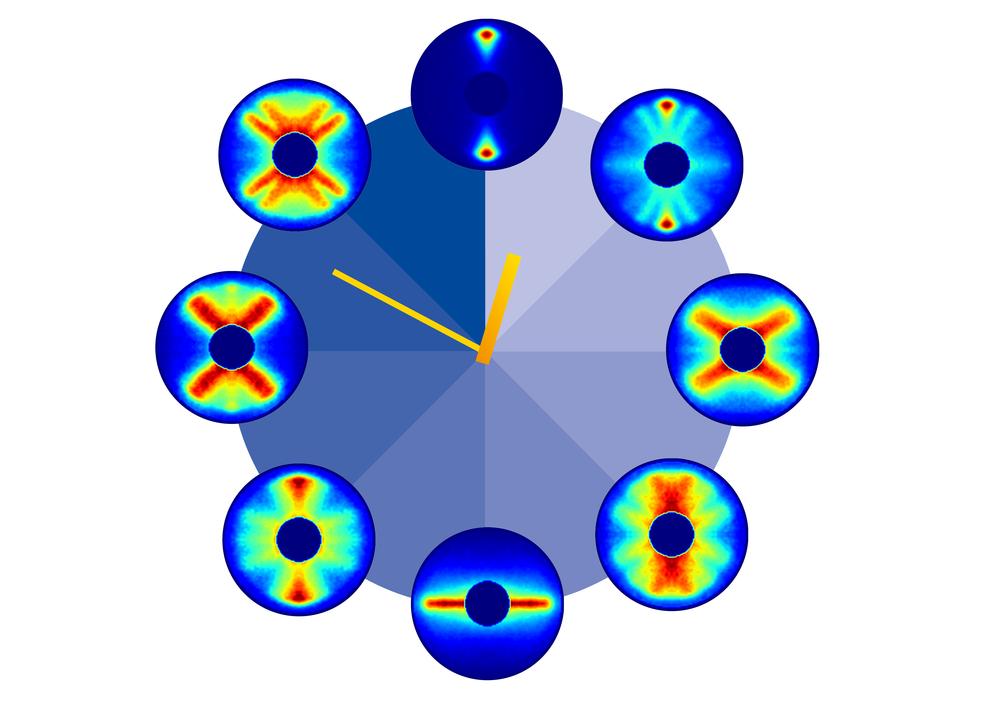 “Molecular physics has long dreamed of capturing the ultrafast motion of atoms during dynamic processes on film,” explains Küpper, who is also a professor at the University of Hamburg. This is by no means simple, however. Because in the realm of molecules, you normally need high-energy radiation with a wavelength of the order of the size of an atom in order to be able to see details. So Küpper’s team took a different approach: they used two pulses of infrared laser light which were precisely tuned to each other and separated by 38 trillionths of a second (picoseconds), to set the carbonyl sulphide molecules spinning rapidly in unison (i.e. coherently). They then used a further laser pulse, having a longer wavelength, to determine the position of the molecules at intervals of around 0.2 trillionths of a second each. “Since this diagnostic laser pulse destroys the molecules, the experiment had to be restarted again for each snapshot,” reports Evangelos Karamatskos, the principal author of the study from CFEL.


Steps of the molecule's rotation, recorded with an average gap of seven picoseconds each.

Altogether, the scientists took 651 pictures covering one and a half periods of rotation of the molecule. Assembled sequentially, the pictures produced a 125 picosecond film of the molecule’s rotation. The carbonyl sulphide molecule takes about 82 trillionths of a second, i.e. 0.000 000 000 082 seconds, to complete one whole revolution. “It would be wrong to think of its motion as being like that of a rotating stick, though,” says Küpper. “The processes we are observing here are governed by quantum mechanics. On this scale, very small objects like atoms and molecules behave differently from the everyday objects in our surroundings. The position and momentum of a molecule cannot be determined simultaneously with the highest precision; you can only define a certain probability of finding the molecule in a specific place at a particular point in time.”

The peculiar features of quantum mechanics can be seen in several of the movie’s many images, in which the molecule does not simply point in one direction, but in various different directions at the same time – each with a different probability (see for example the 3 o’clock position in the figure). “It is precisely those directions and probabilities that we imaged experimentally in this study,” adds Rouzée. “From the fact that these individual images start to repeat after about 82 picoseconds, we can deduce the period of rotation of a carbonyl sulphide molecule.”

The scientists believe that their method can also be used for other molecules and processes, for example to study the internal twisting, i.e., torsion, of molecules or chiral compounds, that are compounds that exist in two forms, which are mirror images of each other – much like the right and left hands of a human being. “We recorded a high-resolution molecular movie of the ultrafast rotation of carbonyl sulphide as a pilot project,” says Karamatskos, summarising the experiment. “The level of detail we were able to achieve indicates that our method could be used to produce instructive films about the dynamics of other processes and molecules.”

In addition to DESY, Universität Hamburg, the Max Born Institute in Berlin, and the University of Aarhus in Denmark were also involved in the project.