Stanford physicists have developed a "quantum microphone" so sensitive that it can measure individual particles of sound, called phonons.

The device, which is detailed July 24 in the journal Nature, could eventually lead to smaller, more efficient quantum computers that operate by manipulating sound rather than light.

“We expect this device to allow new types of quantum sensors, transducers and storage devices for future quantum machines,” said study leader Amir Safavi-Naeini, an assistant professor of applied physics at Stanford’s School of Humanities and Sciences.
Quantum of motion

First proposed by Albert Einstein in 1907, phonons are packets of vibrational energy emitted by jittery atoms. These indivisible packets, or quanta, of motion manifest as sound or heat, depending on their frequencies.

Artist's impression of an array of nanomechanical resonators designed to generate and trap sound particles, or phonons. The mechanical motions of the trapped phonons are sensed by a qubit detector, which shifts its frequency depending on the number of phonons in a resonator. Different phonon numbers are visible as distinct peaks in the qubit spectrum, which are shown schematically behind the resonators. 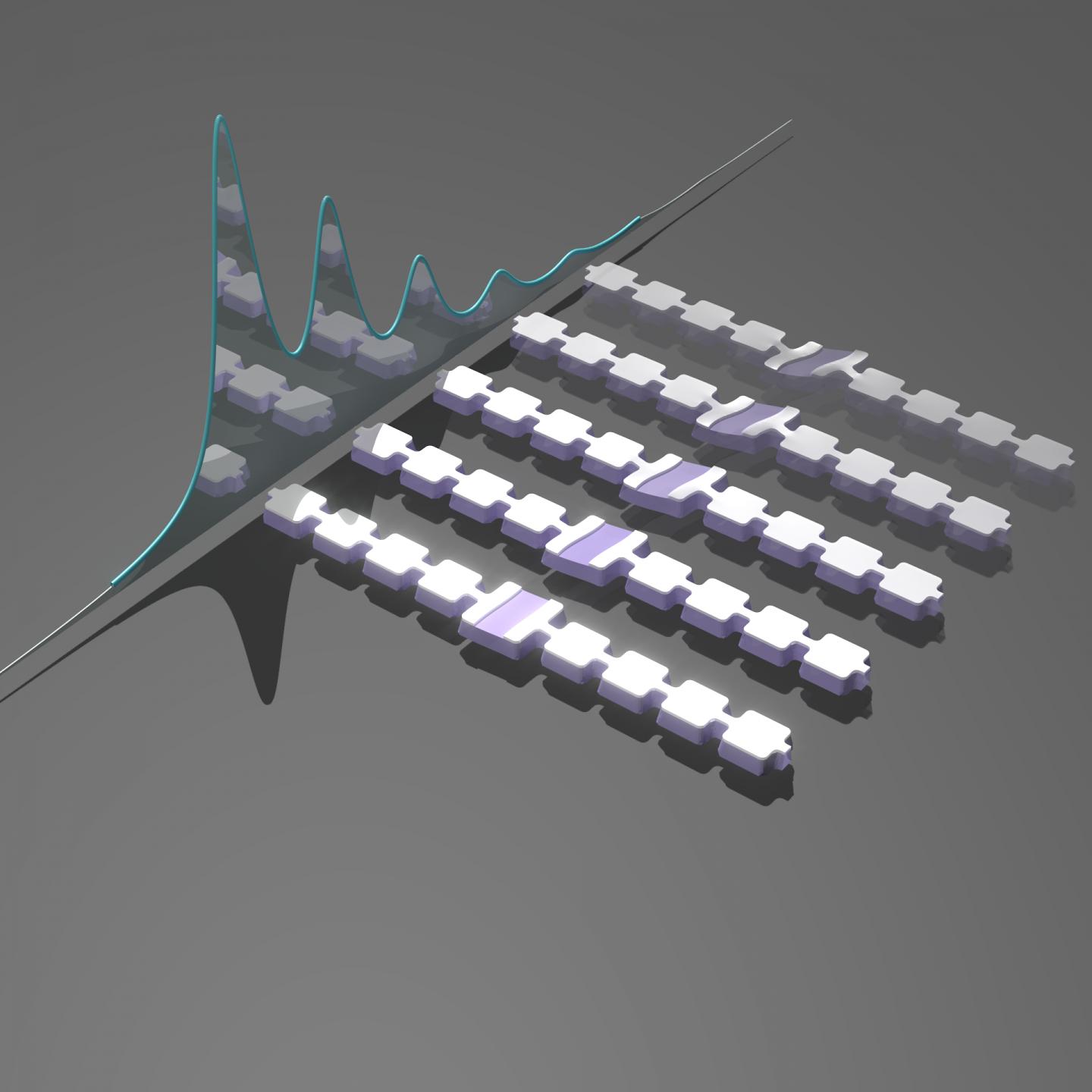 
Like photons, which are the quantum carriers of light, phonons are quantized, meaning their vibrational energies are restricted to discrete values - similar to how a staircase is composed of distinct steps.

"Sound has this granularity that we don't normally experience," Safavi-Naeini said. "Sound, at the quantum level, crackles."

The energy of a mechanical system can be represented as different "Fock" states - 0, 1, 2, and so on - based on the number of phonons it generates. For example, a "1 Fock state" consist of one phonon of a particular energy, a "2 Fock state" consists of two phonons with the same energy, and so on. Higher phonon states correspond to louder sounds.

Until now, scientists have been unable to measure phonon states in engineered structures directly because the energy differences between states - in the staircase analogy, the spacing between steps - is vanishingly small. "One phonon corresponds to an energy ten trillion trillion times smaller than the energy required to keep a lightbulb on for one second," said graduate student Patricio Arrangoiz-Arriola, a co-first author of the study.

To address this issue, the Stanford team engineered the world's most sensitive microphone - one that exploits quantum principles to eavesdrop on the whispers of atoms.

In an ordinary microphone, incoming sound waves jiggle an internal membrane, and this physical displacement is converted into a measurable voltage. This approach doesn't work for detecting individual phonons because, according to the Heisenberg uncertainty principle, a quantum object's position can't be precisely known without changing it.

"If you tried to measure the number of phonons with a regular microphone, the act of measurement injects energy into the system that masks the very energy that you're trying to measure," Safavi-Naeini said.

Instead, the physicists devised a way to measure Fock states - and thus, the number of phonons - in sound waves directly. "Quantum mechanics tells us that position and momentum can't be known precisely - but it says no such thing about energy," Safavi-Naeini said. "Energy can be known with infinite precision."

The quantum microphone the group developed consists of a series of supercooled nanomechanical resonators, so small that they are visible only through an electron microscope. The resonators are coupled to a superconducting circuit that contains electron pairs that move around without resistance. The circuit forms a quantum bit, or qubit, that can exist in two states at once and has a natural frequency, which can be read electronically. When the mechanical resonators vibrate like a drumhead, they generate phonons in different states.

"The resonators are formed from periodic structures that act like mirrors for sound. By introducing a defect into these artificial lattices, we can trap the phonons in the middle of the structures," Arrangoiz-Arriola said.

Like unruly inmates, the trapped phonons rattle the walls of their prisons, and these mechanical motions are conveyed to the qubit by ultra-thin wires. "The qubit's sensitivity to displacement is especially strong when the frequencies of the qubit and the resonators are nearly the same," said joint first-author Alex Wollack, also a graduate student at Stanford.

However, by detuning the system so that the qubit and the resonators vibrate at very different frequencies, the researchers weakened this mechanical connection and triggered a type of quantum interaction, known as a dispersive interaction, that directly links the qubit to the phonons.

This bond causes the frequency of the qubit to shift in proportion to the number of phonons in the resonators. By measuring the qubit's changes in tune, the researchers could determine the quantized energy levels of the vibrating resonators - effectively resolving the phonons themselves.

"Different phonon energy levels appear as distinct peaks in the qubit spectrum," Safavi-Naeini said. "These peaks correspond to Fock states of 0, 1, 2 and so on. These multiple peaks had never been seen before."

Mastering the ability to precisely generate and detect phonons could help pave the way for new kinds of quantum devices that are able to store and retrieve information encoded as particles of sound or that can convert seamlessly between optical and mechanical signals.

Such devices could conceivably be made more compact and efficient than quantum machines that use photons, since phonons are easier to manipulate and have wavelengths that are thousands of times smaller than light particles.

"Right now, people are using photons to encode these states. We want to use phonons, which brings with it a lot of advantages," Safavi-Naeini said. "Our device is an important step toward making a 'mechanical quantum mechanical' computer."

Contacts and sources:
Ker Than
Stanford University - School of Humanities and Sciences