The University of North Carolina at Charlotte-led archaeological dig on Jerusalem's Mount Zion has been going on for over a decade, looking at an area where there were no known ruins of major temples, churches or palaces, but nonetheless sacred land where three millennia of struggle and culture has long lain buried, evidence in layer upon layer of significant historical events.

Virtually every dig season, a significant discovery has been made at the site, adding real detail to the records of this globally-renowned city, giving new insights to what has often been imperfectly preserved in ancient histories. This year's findings are no different, confirming previously unverified details from nearly thousand-year-old historical accounts of the First Crusade - history that had never been confirmed regarding the five-week siege, conquest, sack and massacre of the Fatamid (Muslim)-controlled city in July of 1099.

This earpiece, perhaps of Egyptian manufacture, is apparent loot from the First Crusade sack of Jerusalem in July, 1099. 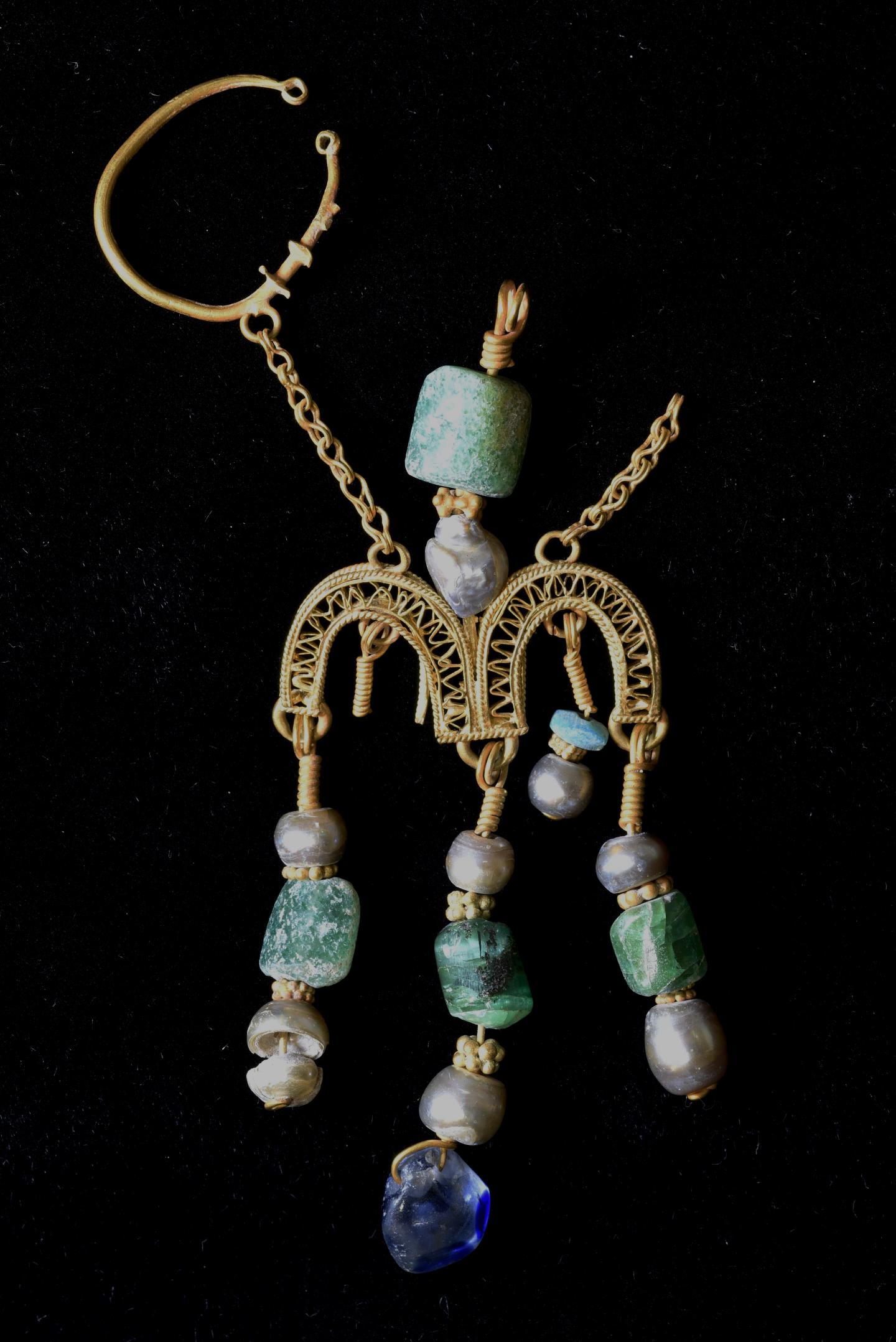 Through stratigraphic evidence, the archaeologists have been able to confirm the 11th Century date of the 17-meter-wide by 4-meter-deep ditch, which abutted the Fatimid city wall (built in the same place as the current wall near the current Zion Gate), and have also found artifacts from the assault itself, including arrowheads, Crusader bronze cross pendants, and a spectacular piece of Muslim gold jewelry, which is probable booty from the conquest.

In past seasons, the team found remnants of a Fatamid city gate at the site, which, the archaeologists argue, makes the area a likely focal point for the Crusaders' main southern assault on the city wall. Despite reported attempts to fill the trench by the attacking forces, the southern assault was ultimately unsuccessful. The city's defenses were finally breached by a simultaneous operation from the north.

Near the trench, the archaeologists also unearthed an earthquake-damaged Fatamid structure, which was probably already a ruin at the time of the assault. The arrowheads, crosses and jewelry were found on the floor of the structure.

This is an aerial view of the Mount Zion archeological dig, 2019 season 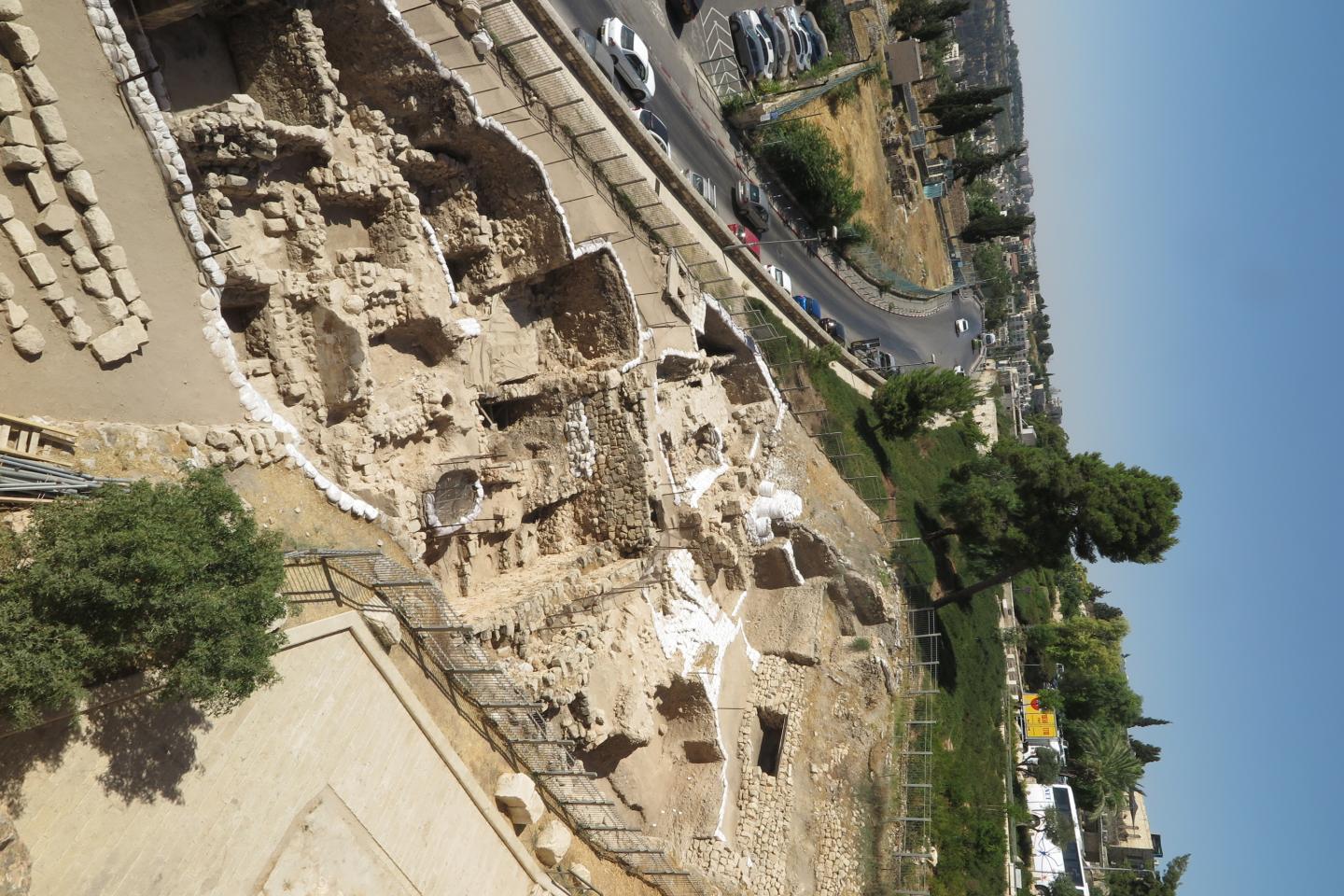 "There was, apparently, an extramural quarter of scattered buildings, outside the city to the south, and we excavated a building that was in a ruinous state, possibly damaged by the earthquake of 1033," Gibson said. "You can imagine the Crusaders coming at and attacking the city from the south and they find the ditch and this ruined building, and they made use of it for cover, and that explains some of the arrowheads because they would have been raining down upon them" Gibson speculated.

The archaeology clarifies a historical picture that is mainly only known from contemporary chroniclers who had been considered questionable in their accuracy. By all accounts, the Crusader attack on the city of Jerusalem was a bloody one and took place on two sides of the city. While the principal forces broke into the city from the north, little has been known about the attack from the south.

Peter Tudebode, a contemporary chronicler, recounts that the Provencal forces led by Raymond de Saint Gille on the south side, positioned themselves somewhere on Mount Zion and proceeded to attack the wall. However, there was a ditch in front of the wall and they could not get their wooden siege tower up against the wall, and so Raymond asked his men, under cover of night, to fill in the ditch for payment of gold dinars. Though the siege tower was able to proceed, the southern assault still did not succeed because of the defenders aggressive counter-measures.

Until the current find, however, there was no evidence that a ditch, trench or moat ever existed, calling into question the reality of the accounts of the southern assault.

The Mount Zion dig team's discovery of the trench came through a puzzling observation made in earlier seasons at the site. "Just outside the city wall we noticed that, although the slope of the hill went down [from the wall], we found that the slope of a layer of fill was going in the opposite direction, dipping down [towards the wall]," Gibson noted. "That was our first clue - there was some feature that had been cut into the ground, which had been filled in later."

The fill provided the dating that explained what the structure was: "What was nice was that the ditch itself was sealed with a burnt layer that had coins in it from the time of King Baldwin III," Gibson said.

Baldwin III was an early crusader king who fought a civil war against his mother, in the course of which he burnt much of Jerusalem. Baldwin's fiery attack was known to be in 1153, about half a century after the conquest, thus dating the ditch as a landscape feature in the period before.

"The ditch got filled in and it disappeared - to such an extent that a lot of archaeologists who had been working at different points in time believed that maybe this ditch was a figment of the chroniclers' imaginations," Gibson said. "That's why this discovery is so important - for the first time, we can confirm details that appear in major historical texts."

The artifacts associated with the find provide some intriguing details about the historical moment of the First Crusade. In the ditch's fill the archaeologists found what might be a part of a battle standard made of metal, as well as pieces of Chinese celadon ware pottery, which show active trade with the far east during the Fatamid period.

The jewelry, which includes fine gold workmanship with pearls and colored beads, was found by staff archaeologists John Hutchins and Melanie Samed, and they carefully extracted it from the ruined house, where it had lain for 920 years. Gibson is fairly certain that it is booty from the sack or carried by the soldiers carrying out the attack, rather than a dropped domestic item, noting that looting was a real interest of the crusaders.

"It's large and valuable, not something you would lose, you see, " Gibson said. "This piece of jewelry may have been of Egyptian origin and it seems to have been used as an attachment for the ear, and because of its large size, perhaps also to hold a veil in position around a women's head." The Fatamid dynasty came from Egypt, and the gold work is a familiar Egyptian style of the period, with the use of gold and pearls in jewelry mentioned in documents from the Cairo Genizah.

Details bringing the moment of conquest to life are particularly important because the battle marks a critical moment in Jerusalem's history. The crusaders takeover is one of several catastrophic moments in Jerusalem's dramatic and violent history when the city was essentially wiped out and re-colonized by its conquerors.

"For three days, or perhaps even a week, the crusaders perpetrated every single atrocity under the sun - rape, pillage, murder," Gibson said. "The chroniclers talk about 'rivers of blood' running in the streets of the city, and it may not be an exaggeration. Terrible crimes were committed, and a lot of people died, Christians included. Local Christians were considered just as heretical as the Muslims and the Jews. They turned Jerusalem into a ghost town."

It is expected that further analysis of the artifacts will reveal further insights.


The Mount Zion Archaeological Project is conducted by Shimon Gibson and James Tabor from the University of North Carolina at Charlotte, in conjunction with Rafi Lewis of Ashkelon Academic College, and with sponsorship from the Loy H. Witherspoon bequest, and from Aron Levy, John Hoffmann, Ron and Cherylee Vanderham, and David and Patty Tyler.

Substantial remains of the city dating back to the Iron Age (7th-6th centuries BCE) were also uncovered this summer season, and vaulted basements from the time of Herod the Great.