How and When A Subterranean Ocean Emerged Discovered

"The mechanism which caused the crust that had been altered by seawater to sink into the mantle functioned over 3.3 billion years ago. This means that a global cycle of matter, which underpins modern plate tectonics, was established within the first billion of the Earth's existence, and the excess water in the transition zone of the mantle came from the ancient ocean on the planet's surface," said project leader and co-author of the article Alexander Sobolev, a member of the Russian Academy of Sciences (RAS) and Doctor of Geological and Mineralogical Sciences who is a Professor at Vernadsky Institute for Geochemistry and Analytical Chemistry under the Russian Academy of Sciences.

The Earth's crust consists of large continuously moving blocks known as tectonic plates. Mountains are produced when these plates collide and rise up, and the shock of the collisions leads to earthquakes and tsunamis. These plates move very actively under the World Ocean: old oceanic crust, including the minerals that have absorbed seawater, sinks deep into the Earth's mantle. Some of this water is released again due to the effect of high temperatures and plays a role in volcanic eruptions, such as those that occur in Kamchatka, the Kuril islands and Japan.

Schematic diagram of water and chlorine transfer by the oceanic crust into the transitional zone of the mantle and the subsequent capture of the resulting material by an Archaean mantle plume. 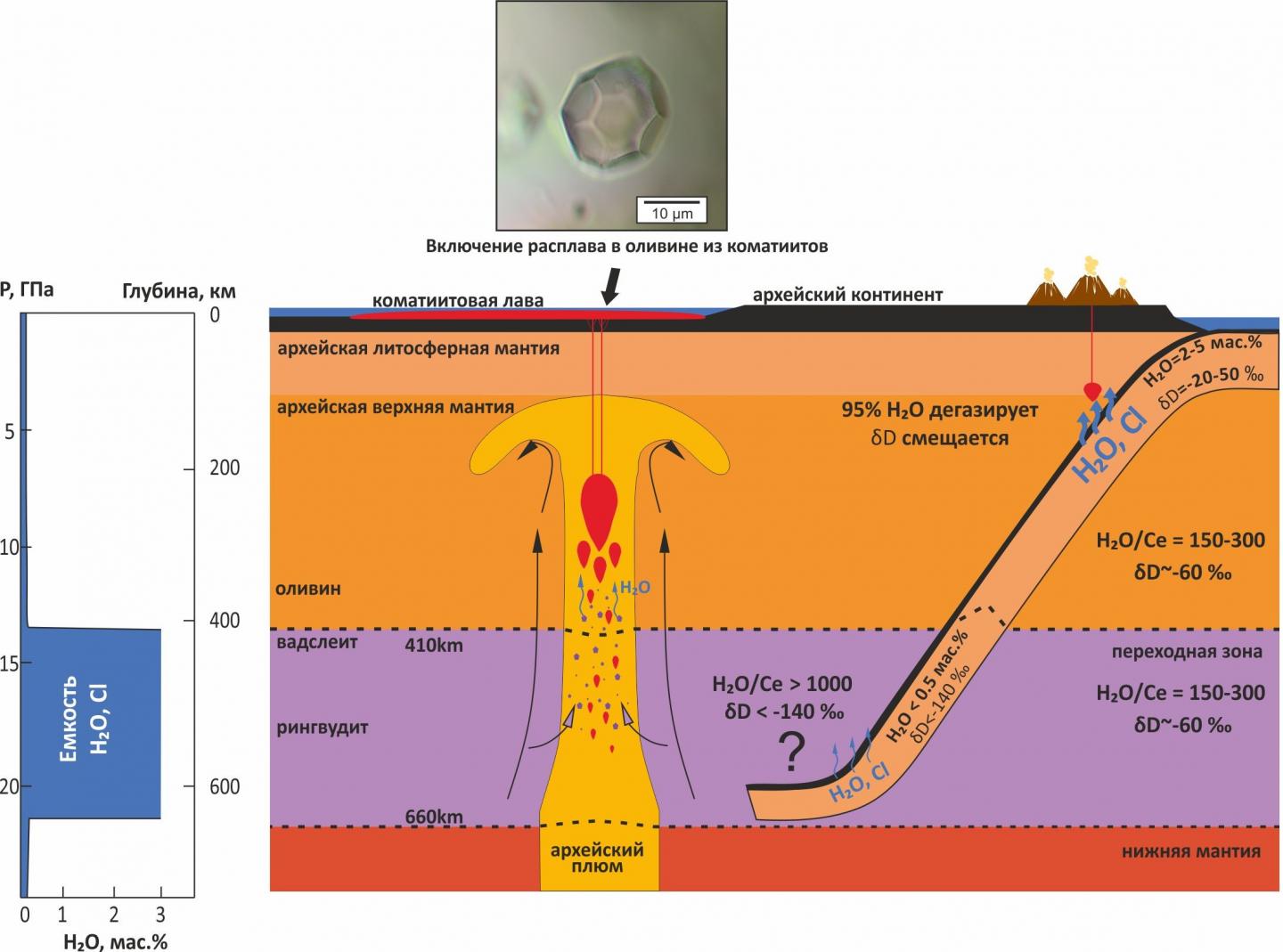 The water that remains in minerals of the oceanic crust at higher temperatures continues to descend into the deep mantle and accumulates at a depth of 410-660 km in the structure of the minerals wadsleyite and ringwoodite and high-pressure modifications of olivine (magnesium iron silicate), the main mineral of the mantle. Experiments have shown that these minerals can contain significant quantities of water and chlorine. This is how the greatest part of the World Ocean could be "pumped" into the planet's interior over the billions of years of its existence.

This process is only a part of the global cycle of the Earth's matter, which is called convection and underpins plate tectonics, a feature that distinguishes our planet from all other bodies in the Solar System. Many scientists study this mechanism, trying to understand at which stage of the Earth's history it appeared.

In order to study the mantle of our planet and investigate its composition, geochemists (scientists who specialise in the chemical composition of the Earth and the processes of rock formation) use samples of volcanic rocks that consist of solidified magma of the mantle. This is a silicate melt enriched in volatile components, such as water, carbon dioxide, chlorine and sulphur. There are different types of magma: scientists commonly use basaltic lava (with a temperature of approximately 1200°C), but komatiitic magma, which was erupted during the early history of the Earth, is hotter (at 1500-1600°C). It can help to describe the evolution of the Earth's inner layers, as it matches the composition of the mantle more completely. 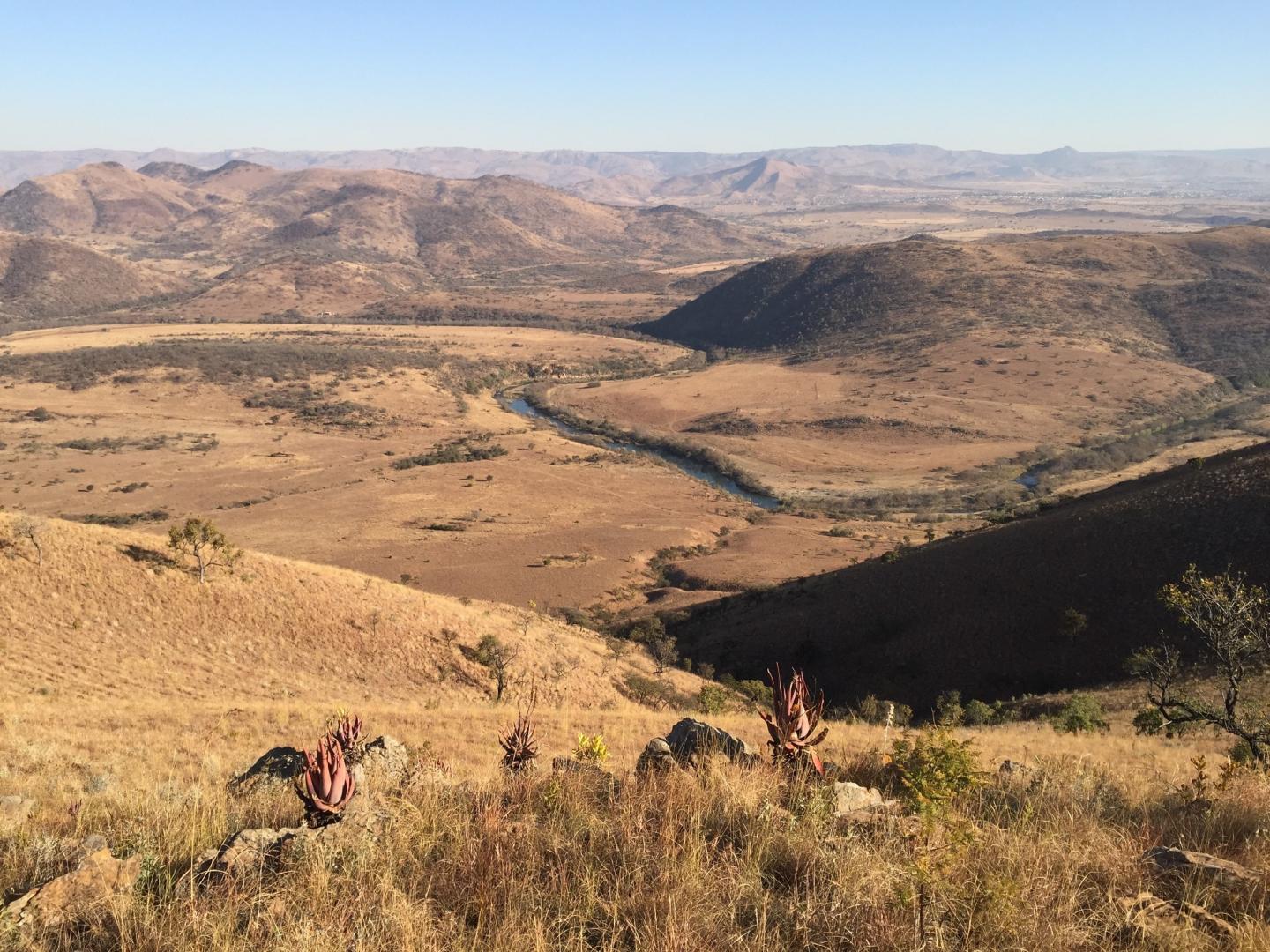 
Komatiites are a type of volcanic rock that formed from komatiitic magma billions of years ago and whose composition has changed dramatically in the intervening epochs. It no longer provides information about the content of volatile components, such as water and chlorine. But these rocks still contain remnants of the magmatic mineral olivine, which trapped inclusions of solidified magma during the crystallisation process and protected them from subsequent changes.

Such inclusions, just tens of microns across, retained detailed information about the composition of komatiitic melts, including the content of water and chlorine and the isotopic composition of hydrogen. In order to extract this information, inclusions of solidified magma must be heated to the natural melting point of over 1500°C and then immediately tempered to produce clear tempered glass that can later be used for chemical analyses.

In 2016, an international group headed by scientists from the Vernadsky Institute for Geochemistry and Analytical Chemistry studied komatiitic magma of the Abitibi greenstone belt in Canada, which is 2.7 billion years old. Greenstone belts are territories consisting of magmatic rocks that contain greenish minerals. This was the first article that the team published in Nature as part of the project supported by the Russian Science Foundation grant. At that time, the scientists collected initial data on the content of water and a variety of labile elements, such as chlorine, lead and barium, in the transition zone between the upper and lower mantle layers at a depth of 410-660 km, which led them to hypothesise that an ancient subterranean water reservoir once existed that was comparable in mass to the present-day World Ocean. The scientists believe that such a quantity of water was accumulated at the early stages of the Earth's development.

"In the new article, we presented geochemical data indicating that the cycle of global immersion of oceanic crust into the mantle began much earlier than most experts believed, and it could have functioned as early as the first billion years of the Earth's history," noted Alexander Sobolev.

In the course of the work, the scientists once again investigated the composition of komatiite magma, but of a different origin: it was collected from the Barberton greenstone belt in South Africa, which is 3.3 billion years old. The magma was heated using a specialised high-temperature apparatus that can withstand temperatures of up to 1700°C. The geochemists found out that the previously discovered deep water-containing reservoir was already present in the Earth's mantle in the Palaeoarchaean era, 600 million years earlier than established in the previous study.


A part of the work was supported by the Russian Science Foundation (RSF).