Chameleon Theory Could Change Our Thoughts on Gravity

Einstein’s theory of General Relativity is world famous – but it might not be the only way to explain how gravity works and how galaxies form.

Physicists at Durham University created huge supercomputer simulations of the universe to test an alternative theory.

Computer simulation of a disc galaxy. 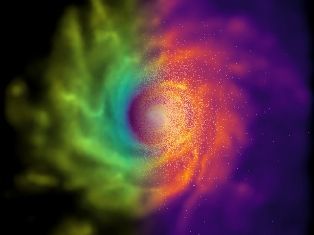 Our researchers found that f(R)-gravity – a so-called Chameleon Theory – could also explain the formation of structures in the cosmos.

The simulations show that disc spiral galaxies like our Milky Way still form, even when a different law of gravity is applied.

Scientists already know that f(R)-gravity can reproduce the success of General Relativity in demonstrating the evolution of our solar system.

But our new research now shows that this theory can also be applied to galaxy formation on very large cosmological scales.

This doesn’t mean that Einstein was wrong, though!

Instead, it shows that there might be more than one way to explain gravity’s role in the evolution of the universe.

General Relativity was developed by Einstein in the early 1900s to explain the gravitational effect of large objects in space.

It also has consequences for understanding the accelerating expansion of the universe, which it’s thought is driven by a mysterious substance called dark energy.

However, models like f(R)-gravity can also explain the universe’s rapid growth and our researchers say their work could also be small step towards identifying what dark energy is.

Our astronomers and cosmologists are among the best in the world and are constantly shedding new light on the science of the universe.

In the past year we’ve also shown how supermassive black holes can help to measure the expansion of the early universe; how our Milky Way is on a catastrophic collision course with a neighbouring galaxy; and why Uranus is tilted on its side.

We’re also helping to build the Extremely Large Telescope - the biggest telescope in the world. Discover more about our Cosmology and Astronomy research.

The f(R)-gravity research is published in Nature Astronomy.

The research was funded by the European Research Council and the Science and Technology Facilities Council.

Computer simulations were run on the DiRAC Data Centric System based at Durham University.
Contacts and sources: