The role of an excited black hole in the death of an exotic 'jellyfish' galaxy will be presented today (3 July) by Callum Bellhouse of the University of Birmingham at the RAS National Astronomy Meeting in Lancaster. The supermassive black hole at the centre of jellyfish galaxy JO201 is stripping away gas and throwing it out into space, accelerating suppression of star formation and effectively 'killing' the galaxy.

Jellyfish galaxies are spectacular objects that undergo a dramatic process of transformation as they plunge through the dense core of a galaxy cluster at supersonic speeds. External drag forces tear away the galaxy's gas, in a process known as ram-pressure stripping, leaving extended tentacles of trailing material.

This is jellyfish galaxy JO201. 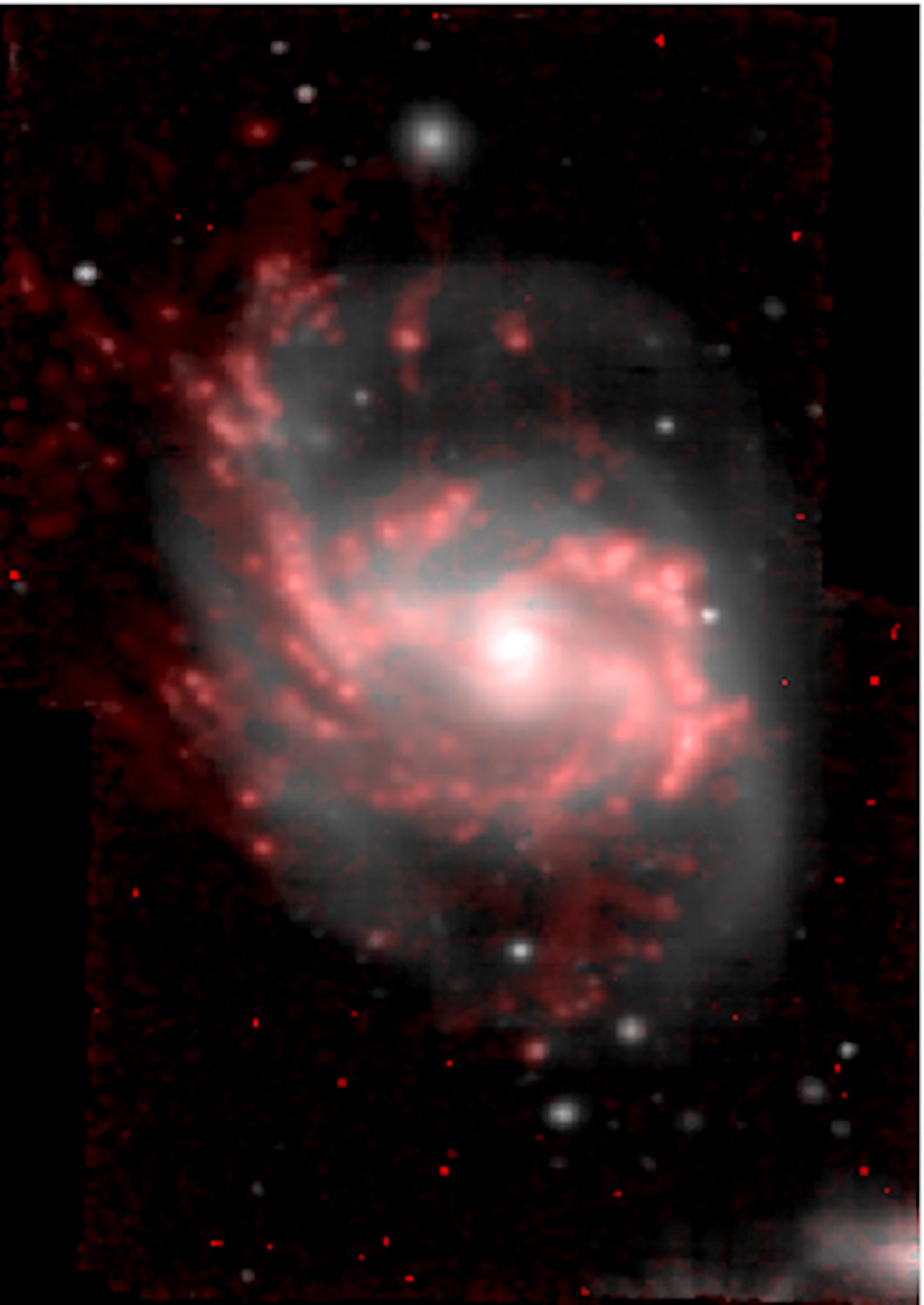 
The fate of JO201 has been revealed as part of a study of 114 jellyfish galaxies by the GASP (GAs Stripping Phenomena) collaboration, an international team of researchers led by Dr Bianca Poggianti.

To explore the structure of the jellyfish galaxies in 3D and estimate the timescales of their transformation, Bellhouse has created interactive models that can also be experienced in virtual reality.

The study shows that JO201, originally a large spiral galaxy, has been diving through the massive cluster Abell 85 at supersonic speeds for around a billion years. As the jellyfish galaxy is travelling along the line of sight, its tentacles appear foreshortened in the model, but the team estimates that they trail 94 kiloparsecs behind JO201 -- about three times the diameter of our Milky Way.

"A galaxy sustains itself by constantly forming new stars from gas, so understanding how gas flows into and out of a galaxy helps us learn how it evolves. The example of JO201 shows how the balance tips towards then away from star-formation as it plunges through the galaxy cluster and faces increasingly extreme stripping of its gas," said Bellhouse.

This is jellyfish galaxy JO201. 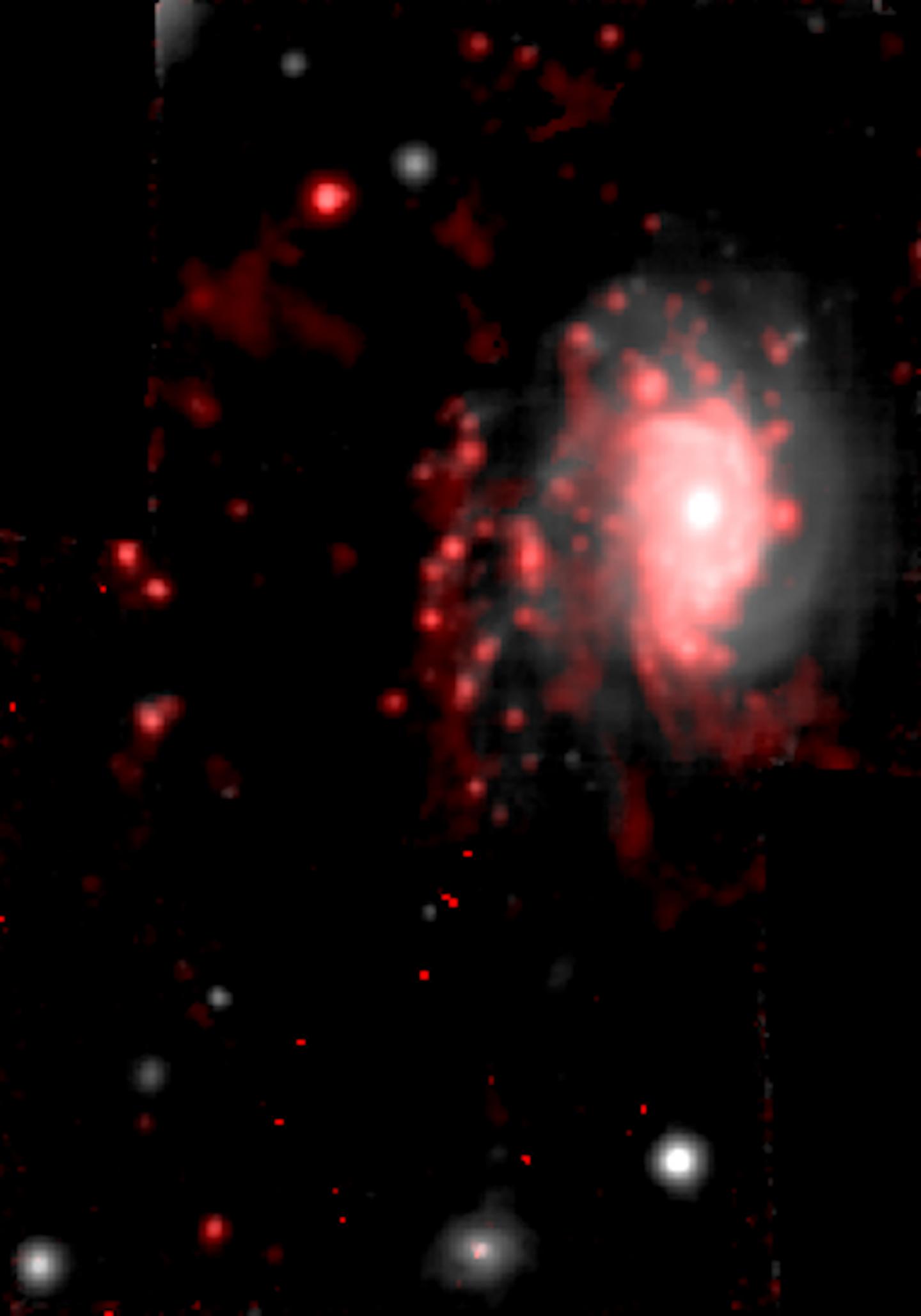 JO201's transformation into a jellyfish galaxy has caused a brief increase in star formation due to the ram-pressure stripping process. Compressed clouds of gas have collapsed and formed a ring of stars in the disk of the galaxy. Dense knots in tentacles have condensed like rainclouds to begin forming new stars in the galaxy's wake.

However, the over the last few hundred million years, the black hole appears to have ripped away gas to leave a large void around the centre of the galaxy disc. The team believes that the ram-pressure stripping may have funnelled gas into the central parts of the galaxy, where it has provoked the black hole into blasting out material and creating a shock-wave that has left a cavity behind.

"An important balancing act occurs between processes which either boost or diminish the star formation rate in jellyfish galaxies. In the case of JO201, the central black hole becomes excited by the ram-pressure stripping and starts to throw out gas. This means that the galaxy is being hollowed out from the inside, as well as torn away from the outside," said Bellhouse.

This is a composite image of jellyfish galaxy JO201 made from combining near ultraviolet (colored blue), Hα (colored red) and oxygen (colored green). 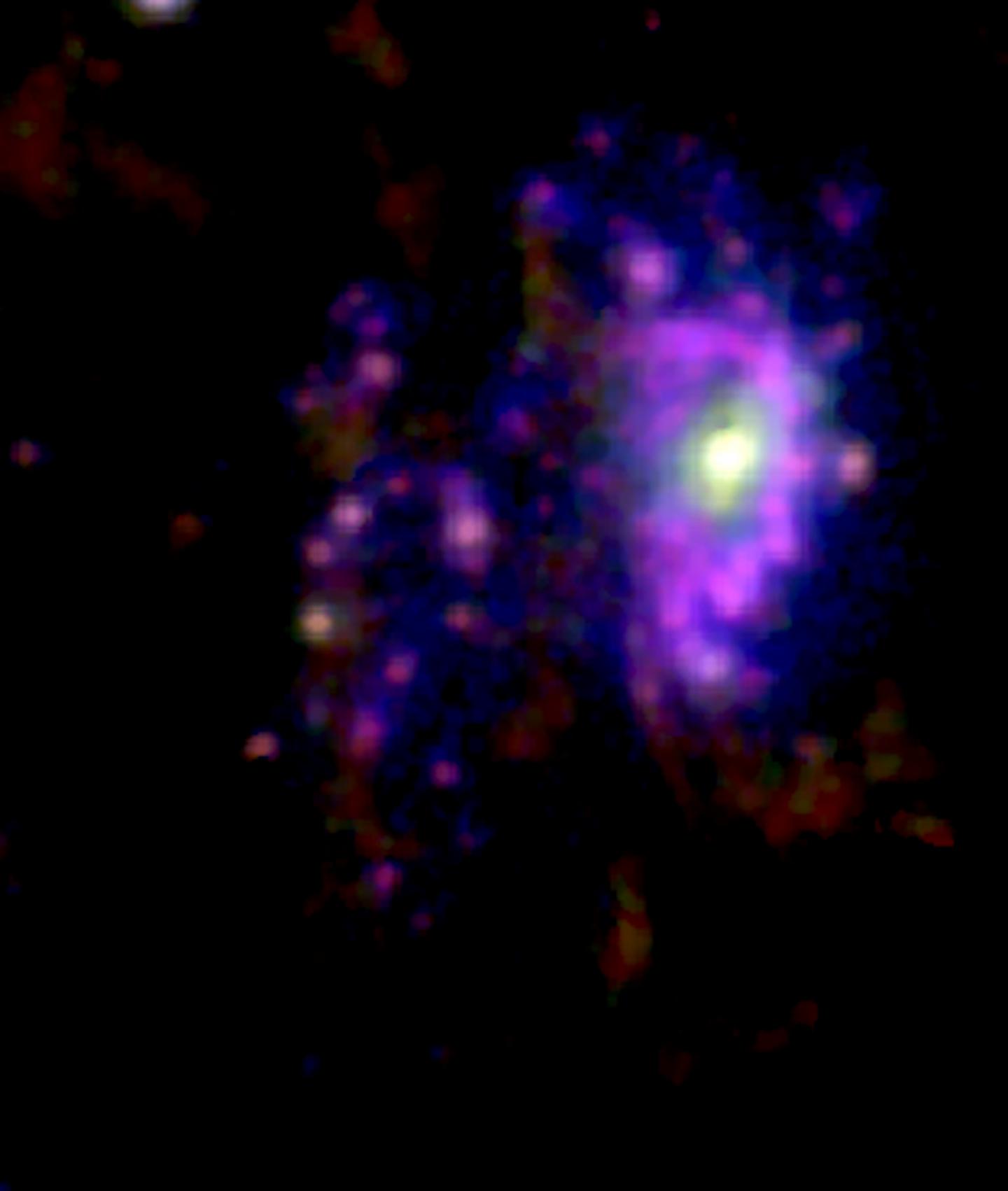 "JO201 is, so far, a unique example of a supermassive black hole and ram-pressure stripping in quenching star formation in a jellyfish galaxy. Studying these curious objects gives us an insight into the complex processes that galaxies experience," said Bellhouse.

An interactive visualisation showing a 3D model of the distribution of stars and gas in the Jellyfish Galaxy JO201/JW100/JO194. The model is made using the spatial distribution of stars and gas on the sky, with the velocity along the line-of-sight giving the depth. Red=Hydrogen, Blue=Nitrogen, Green=Oxygen, White=stars.
https://sketchfab.com/3d-models/jo201-3fb078406b6648a08f34869e7029fc3f
Credit: Callum Bellhouse and the GAS