The Universal Beauty of the Mountains Can Be Seen in Graphs 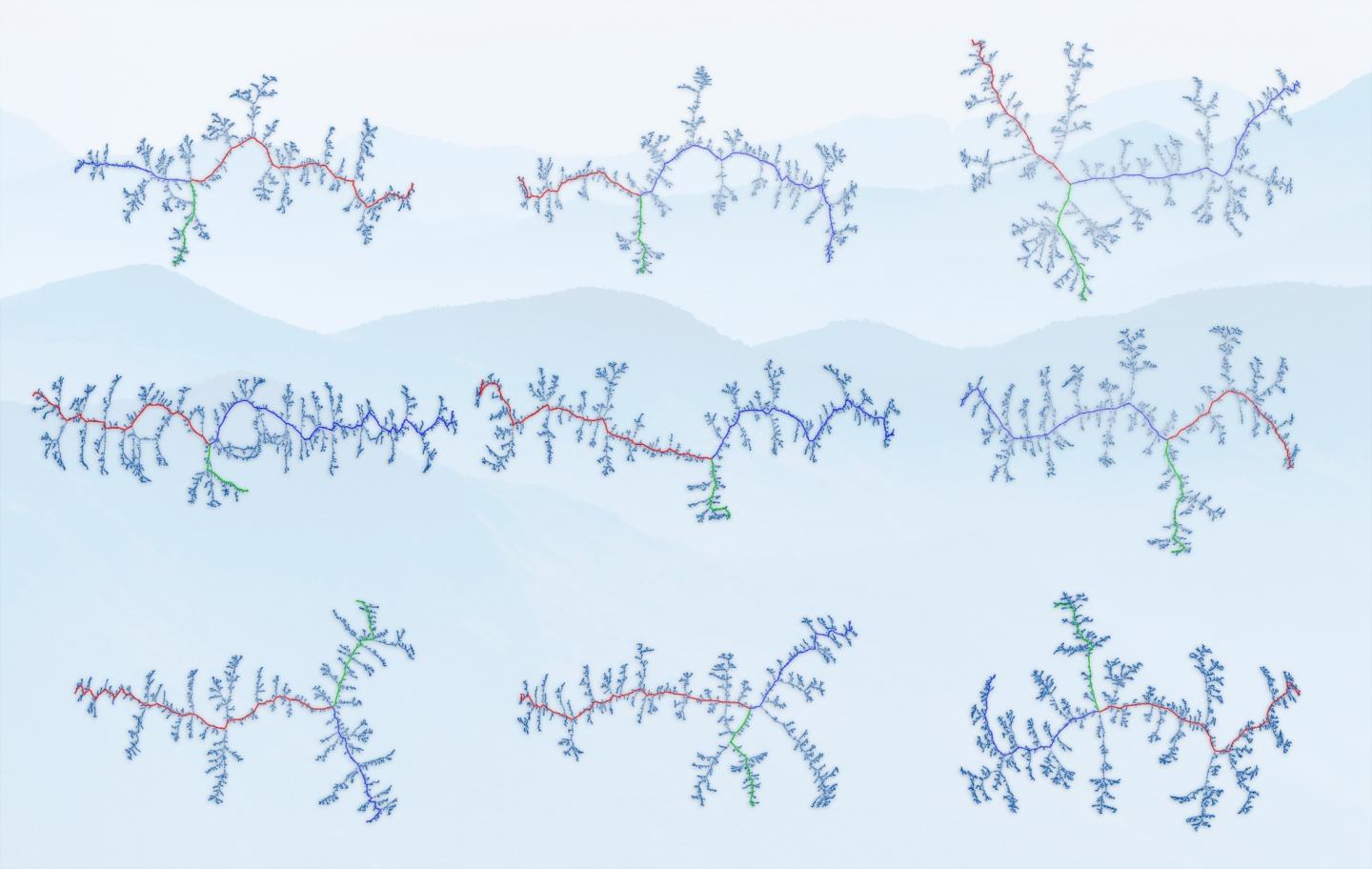 
Mountains have character. The continuous gentle, wavy hills and wide valleys of the Carpathians, Appalachians or lower parts of the Alps contrast strongly with the soaring peaks, ragged ridges and deep ravines of the high Tatra mountains and Pyrenees, which are, in turn, different from the inaccessible, snow-covered Himalayan or Andean giants, along whose slopes flow long tongues of glaciers instead of water. Beneath this great diversity, however, lies a surprisingly similar structure.

Using graphs and fractals, scientists from the Institute of Nuclear Physics of the Polish Academy of Sciences (IFJ PAN) in Cracow looked at the structure of the massifs of our planet. Such diverse ranges as the Alps, the Pyrenees, the Scandinavian Mountains, the Baetic Mountains, the Himalayas, the Andes, the Appalachians, the Atlas Mountains and the Southern Alps all went under the statistical magnifying glass. The analysis, presented in the Journal of Complex Networks, resulted in an unexpected observation. It turns out that there is a universal similarity in the structure of the Earth’s massifs. It can be seen in mountain ranges on all continents, regardless of the size of the peaks, their age, or even whether they are of tectonic or volcanic origin.

“It would seem that the only thing that the various mountain ranges have in common is that when you look at them, you have to really bend your head back. The real similarity only becomes visible when we transform a simple topographic map of the mountains into a ridge map, i.e. one that shows the axes of all the ridges”, says Dr. Jaroslaw Kwapien (IFJ PAN), and then adds: “The axis of the ridge is a line running along the top of the mountain ridge in such a way that on both its sides the terrain falls downwards. It is thus the opposite of the axis of a valley.”

Earth's mountain ranges share the same universal features. They become visible when the topographic map (here: the Ligurian Alps) is transformed into a ridge map.


Mountain ridges are not discrete creations. They merge into a large, branched structure, resembling a tree: from the main ridge (“the trunk”) there are longer or shorter side ridges of the first order (“branches”), from them arise side ridges of the second order, and from these subsequent ones again and again. The whole has a clearly hierarchical structure and the number of degrees of complexity depends on the size of the area covered with mountains and can reach even several dozen. Structures of this type are presented in the form of various graphs. For example, each ridge of a given massif can be treated as a node. Two nodes are connected by lines (edges of the graph) when the corresponding ridges are also connected. In this sort of graph, some nodes are connected to many nodes, whereas others are connected to only a few.

Graphs constructed for different massifs have different structures (topology). One way of studying these is the node degree distribution, containing information about the number of nodes of a given degree. In typical distributions, large values appear at nodes of a low degree, because they are the most numerous. There are usually not many nodes of a high degree – hubs. In the case of mountains, the main hub, usually corresponding to the longest ridge of the studied mountain chain, has a degree of several thousand. Second order hubs, i.e. side ridges of the main ridge, have degrees of several hundred. The most numerous are nodes with a degree of one. There can be even several hundred thousand of these.

“The node degree distribution of the ridges turns out to be of a power-law nature. This means that the number of nodes of a certain degree and, for example, the number of nodes with a degree that is half as much are in a constant relation, regardless of the selected degree. Each fragment of the distribution increased by a certain constant factor looks like a whole, which means that no scale is distinguished”, says Dr. Kwapien.

Power-law distributions are found in graphs representing systems occurring in nature (e.g. when studying the links between proteins and enzymes in a living cell), as well as in our own activities (such as citations of scientific papers, the cooperation of actors in films, the neighbourhood of words in texts, links between websites). They often describe self-similar, fractal structures. One of the model examples of natural fractals are mountains. Their computer models are even generated by algorithms using fractal geometry, so the power-law topology of ridge graphs should not surprise anyone. However, the value of the power exponent did turn out to be a surprise.

“Regardless of the type of mountains, the exponent of the power-law distribution took on values over a very narrow range around the number 5/3. If we take into account the accuracy of our methodology, this narrow range of values may even mean that the exponents in each examined case were the same”, notes Dr Kwapien.

The observed homogeneity results from the fact that in every part of our planet the main mechanisms responsible for mountain sculpture are basically the same. Tectonic or volcanic movements are necessary to raise the terrain, but the most important sculpting factor is water and glacial erosion. Water and ice lead to cracking and crushing of rocks and transfer the fragmented material to the lowlands. This results in gullies, canyons and mountain valleys, and therefore also ridges. Since the watercourses that form the drainage system of a given area are of a dendritic structure by nature (outside desert areas, of course), a similar structure also occurs in the case of the ridge systems. But why are the mutual relations between the numbers of ridges with a different number of branches so similar for different types of mountains?

“The situation becomes clearer when we consider gravity in addition to water”, explains Dr. Kwapien. “When rock material is crushed, it becomes subject to the dynamics of loose bodies regardless of its chemical composition. Loose bodies on slopes can only remain there if the angles of inclination are not too great. The slopes must not be too steep. This is why the depth of valleys in nature is limited by their own width. Narrow river canyons with almost vertical walls only exist at an early stage of sculpture formation. They are rare in mature mountain formations because their walls have already undergone slanting.”

The existence of river systems draining water from a given area, erosion crushing rocks and carving valleys, as well as gravitational landslides of rock rubble mean that the ridges cannot be arbitrarily close or far from each other. There is an optimal arrangement, independent of the properties of the mountain range and giving the mountains some universal features.

The above observations are complemented by another observation made by the IFJ PAN physicists, concerning the dimensions of the fractal ridge structures. The fractal dimension describes how rough the structure of the object is. The line of a single ridge has a dimension of 1. If the lines (ridges) were placed extremely densely, their fractal dimension would correspond to the dimension of the surface, and therefore would be equal to 2. The researchers showed that if the ridge structures are presented as graphs whose nodes are the intersections of the ridges (it is in these intersections that peaks are most common), and the edges of the graphs are the ridges connecting the peaks, then the fractal dimensions of such graphs would be with a good approximation equal to the number... 5/3.

“In some graphs we see the hierarchy of mountain structures, in others their fractality. In both cases, for all types of mountains we encounter the same values of the appropriate numbers. This universalism gives food for thought”, states Prof. Stanislaw Drozdz (IFJ PAN, Cracow University of Technology).