The Cycle of Species Origination and Extinction, Extreme Events More Frequent Than Expected

"Fluctuations in biodiversity, large and small, pervade the fossil record, yet we do not understand the processes generating them. "

Throughout life's history on earth, biological diversity has gone through ebbs and flows -- periods of rapid evolution and of dramatic extinctions. We know this, at least in part, through the fossil record of marine invertebrates left behind since the Cambrian period. Remarkably, extreme events of diversification and extinction happen more frequently than a typical, Gaussian, distribution would predict. Instead of the typical bell-shaped curve, the fossil record shows a fat-tailed distribution, with extreme, outlier, events occurring with higher-than-expected probability.

While scientists have long known about this unusual pattern in the fossil record, they have struggled to explain it. Many random processes that occur over a long time with large sample sizes, from processes that produce school grades to height among a population, converge on the common Gaussian distribution. "It's a very reasonable default expectation," says Santa Fe Institute Omidyar Fellow Andy Rominger. So why doesn't the fossil record display this common pattern?

This is an illustration of marine fossils that have existed since the Cambrian. Represented taxa include brachiopods, trilobites, ammonites, bivalves, and decapods. 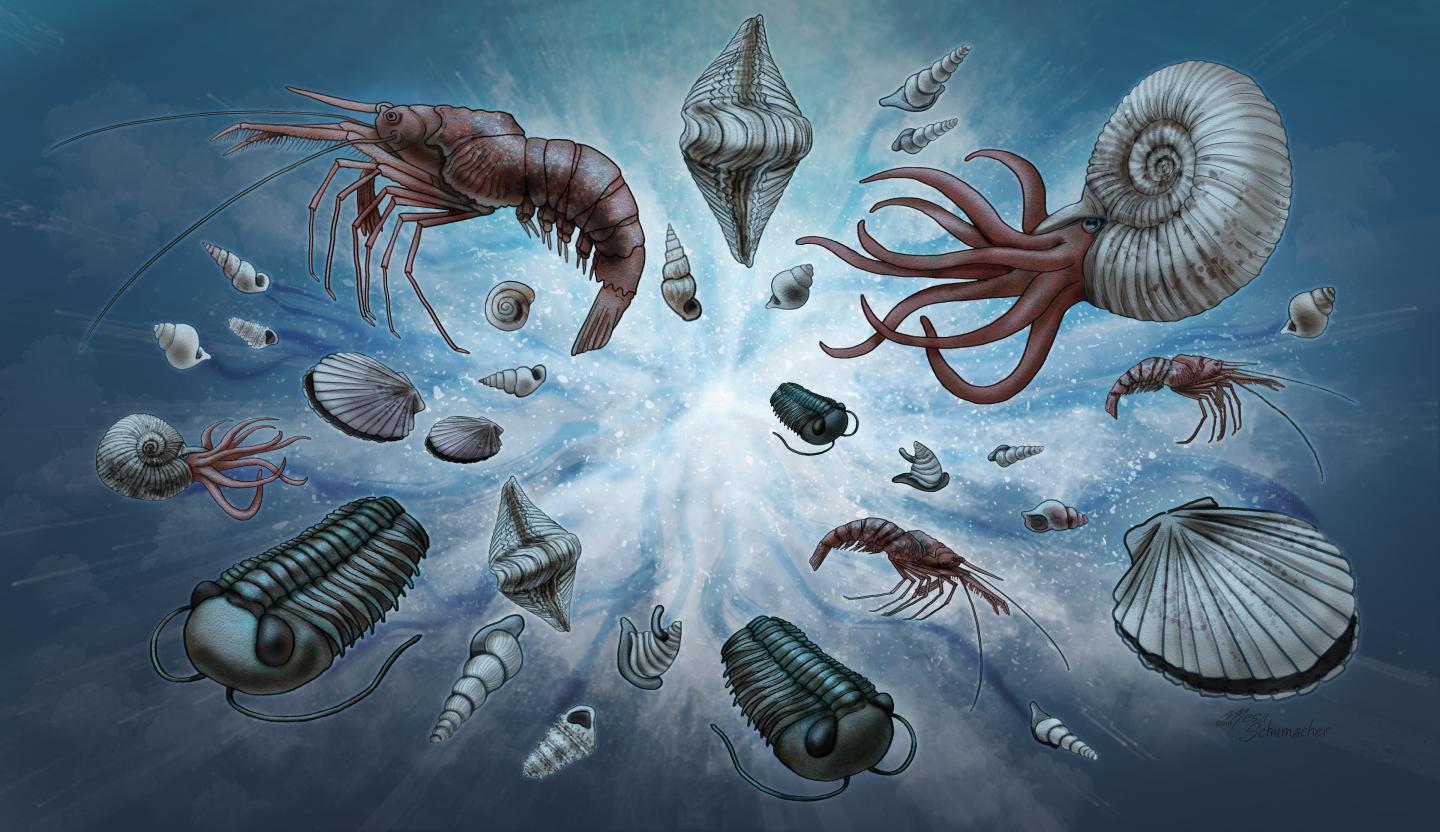 In a new paper published in Science Advances, Rominger and colleagues Miguel Fuentes (San Sebastián University, Chile) and Pablo Marquet (Pontifical Catholic University of Chile) have taken a new approach to tackling this question. Instead of trying to only describe fluctuations in biodiversity across all types of organisms, they also look at fluctuations within clades, or groups of organisms that share a common ancestral lineage.

"Within a lineage of closely related organisms, there should be a conserved evolutionary dynamic. Between different lineages, that dynamic can change," says Rominger. That is, within clades, related organisms tend to find an effective adaptive strategy and never stray too far. But between these clade-specific fitness peaks are valleys of metaphorically uninhabited space. "It turns out, just invoking that simple idea, with some very simple mathematics, described the patterns in the fossil record very well."

These simple mathematics are tools that Fuentes, in 2009, used to describe another system with an unusual fat-tailed distribution: the stock market. By using superstatistics -- an approach from thermodynamics to describe turbulent flow -- Fuentes could accurately describe the hard-to-predict dramatic crashes and explosions in value.

"In biology, we see these crashes and explosions too, in terms of biodiversity," says Rominger. "We wondered if Fuentes' elegant approach could also describe the evolutionary dynamics we see in the fossil record."

The team writes that their success opens up new research directions to better understand the evolutionary processes that lead to both stable rates of extinction and speciation at the order- and family-levels of life, and to interruptions that allow for new life forms to emerge.