Dying stars that cast off their outer envelopes to form the beautiful yet enigmatic "planetary nebulae" (PNe) have a new heavy-weight champion, the innocuously named PNe "BMP1613-5406". Massive stars live fast and die young, exploding as powerful supernovae after only a few million years.

However, the vast majority of stars, including our own Sun, have much lower mass and may live for many billions of years before going through a short lived but glorious PNe phase. PNe form when only a tiny fraction of unburnt hydrogen remains in the stellar core. Radiation pressure expels much of this material and the hot stellar core can shine through. This ionizes the previously ejected shroud creating a PNe and providing a visible and valuable fossil record of the stellar mass loss process (PNe have nothing to do with planets but acquired this name because their glowing spheres of ionized gas around their hot central stars resembled planets to early observers).

This is a 30 x 30 arcminute image of NGC6067 & BMP1613-5406. North-East is top left. The image is a B,R,H-alpha tri-colour RGB image (extracted from the online UK Schmidt Telescope SuperCOSMOS H-alpha Survey H-alpha, short-Red (SR) and broad-band 'B' images. 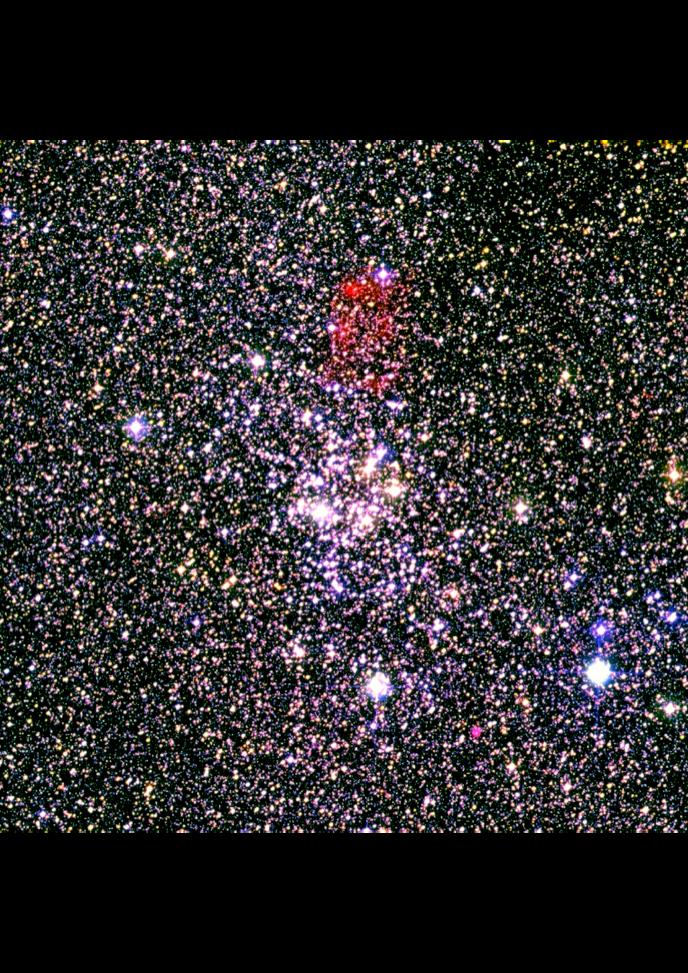 PNe theoretically derive from stars in the range 1-8 times the mass of the Sun, representing 90% of all stars more massive than the sun. However, until now, PNe have been proven to derive from stars born with only 1-3 times the mass of our Sun. Professor Quentin Parker, Department of Physics and Director of The Laboratory for Space Research, The University of Hong Kong and his PhD student Miss Fragkou Vasiliki, in collaboration with University of Manchester and South African Astronomical Observatory, have now officially smashed this previous limit and grabbed the proof that a PNe has emerged from a star born with 5.5 times the mass of our Sun. Their journal paper "A high-mass planetary nebula in a Galactic open cluster" has just been published on the Nature Astronomy's website.

But why is this important?

Firstly, PNe provide a unique window into the soul of late stage stellar evolution revealed by their rich emission line spectra that are excellent laboratories for plasma physics. PNe are visible to great distances where their strong lines permit determination of the size, expansion velocity and age of the PN, so probing the physics and timescales of stellar mass loss. They can also be used to derive luminosity, temperature and mass of their central remnant stellar cores, and the chemical composition of the ejected gas.

Secondly, and key here, is that this is an unprecedented example of a star whose proven original "progenitor" mass is close to the theoretical lower limit of core-collapse supernova formation. Our results are the first solid evidence confirming theoretical predictions that 5+ solar mass stars can actually form PNe. This unique case therefore provides the astronomical community with an important tool for fresh insights into stellar and Galactic chemical evolution. 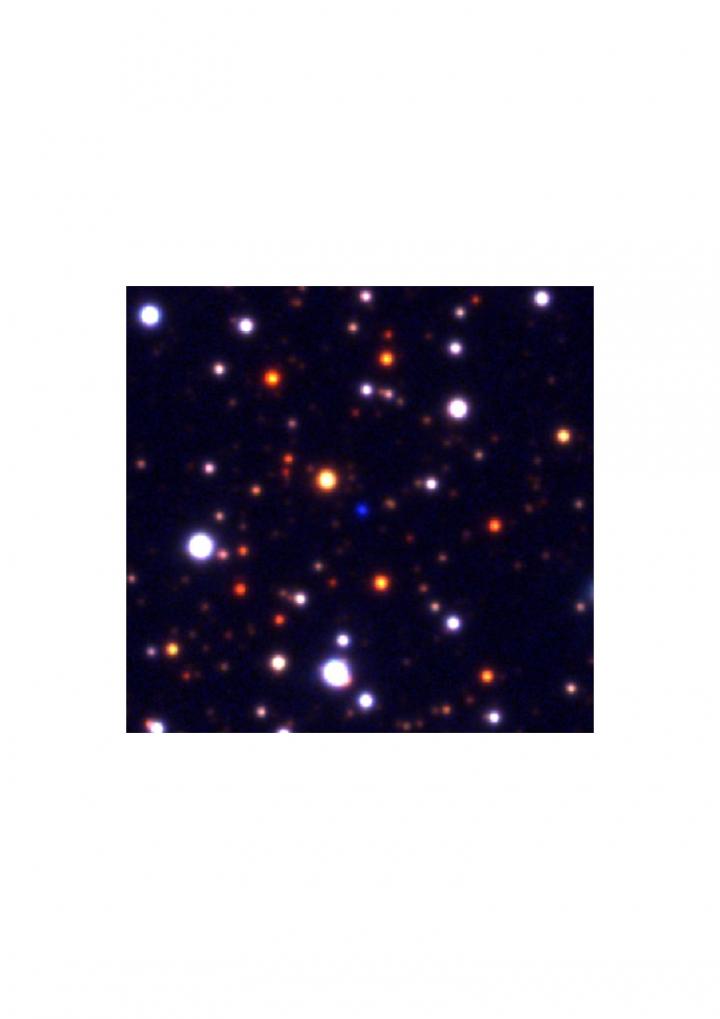 The key was the discovery of the PNe in a young, Galactic open cluster called NGC6067. Finding a PNe residing in an open cluster is an extremely rare event. Indeed, only one other PNe, "PHR1615-6555" has ever been previously proven to reside on an open cluster but whose progenitor star had considerably lower mass. Interestingly, this was an earlier discovery from the same led team as here. The proven location of a PN in a cluster provides key and important data that is difficult to acquire otherwise. This includes an accurate distance and a cluster "turn off" mass estimate (i.e. the mass a star must have had when it was born to now be seen evolving off the main sequence in the cluster of known age). High confidence in the PN-cluster association comes from their highly consistent radial velocities (to better tan 1km/s) in a sight-line with a steep velocity-distance gradient, common distances, common reddening and projected and close physical proximity of the PN to the cluster centre.

A current plot from cluster WDs for the latest IFMR estimates from Cummings et al (2018), together with our estimated point for BMP1613-5406 plotted as a red circle. The only other point from a known OC PN is plotted as a yellow circle (Parker et al 2011). The errors attached to our point reflect the errors in the adopted cluster parameters and the spread of the estimated CS magnitudes. 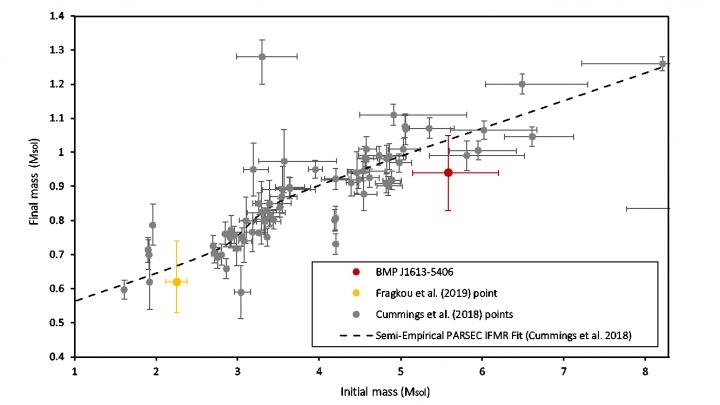 In summary our exciting results are solid evidence confirming theoretical predictions that 5+ solar mass stars can form planetary nebulae and are, as expected, Nitrogen rich. The PN's cluster membership provides fresh and tight constraints on the lower mass limit for the progenitor mass of core-collapse supernovae and also for the intermediate to high mass end of the white dwarf Initial to Final Mass Relation (IFMR). It also provides an empirical benchmark for evaluating nucleosynthetic (element creation) predictions for intermediate-mass stars. PN BMPJ1613-5406 and its cluster NGC6067 will provide the astronomical community with important insights into stellar and Galactic (chemical) evolution.