Spiders Risk Everything for Love

Spiders put it all on the line for love say biologists. 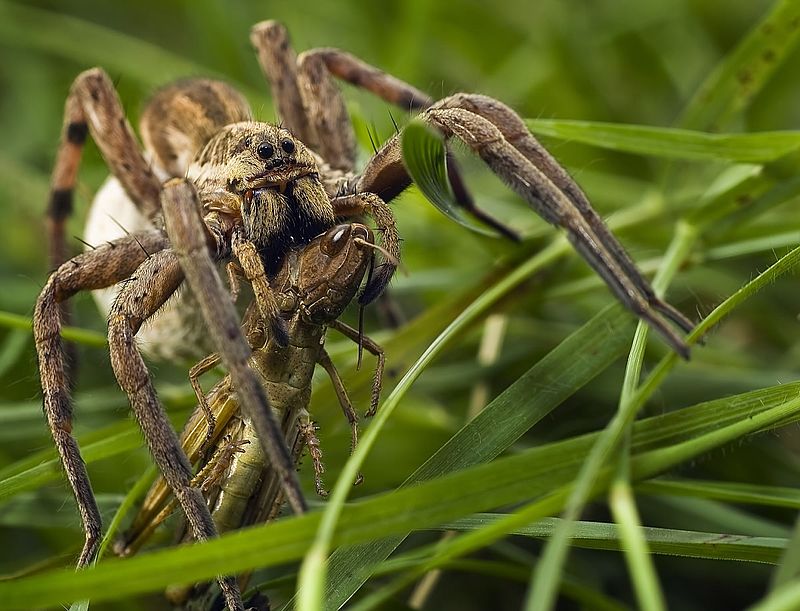 University of Cincinnati biologist George Uetz long suspected the extravagant courtship dance of wolf spiders made them an easy mark for birds and other predators.

But it was only when he and colleague Dave Clark from Alma College teamed up with former University of Minnesota researcher Tricia Rubi and her blue jays that he could prove it.

For a study published in May in the journal Behavioural Processes, Rubi trained a captive colony of blue jays to peck at buttons to indicate whether or not they saw wolf spiders (Schizocosa ocreata) on video screens.

A blue jay from the experiment at the University of Minnesota.


Clark made videos superimposing images of courting, walking and stationary male spiders on a leaf-litter background. Rubi presented the videos to blue jays on a flat display screen on the ground.


Wolf spiders are brindled black and brown like a painted dog. And they have a median stripe that breaks up their body outline. When viewed from above, they disappear amid the dead leaves.

For the experiment, one set of males was their natural black and brown color while another was altered to be even more camouflaged.

The jays had trouble finding spiders that stayed motionless in the videos. This confirmed the adaptive value of the anti-predator “freeze” behavior. The jays had less trouble seeing spiders that walked in the video. But the jays were especially quick to find male spiders engaged in ritual courtship behavior, in which they wave their furry forelegs in the air like overzealous orchestra conductors. The jays spotted courting spiders regardless of the experiment’s changes to their color. 
The study demonstrates UC's commitment to research as described in its strategic direction called Next Lives Here.

“By courting the way they do, spiders are clearly putting themselves at risk of bird predation,” UC's Uetz said.

His lab studies the complementary methods spiders employ to communicate with each other, called multimodal communication. Female spiders leave a pheromone trail behind them in their silk and when they rub their abdomens on the ground, Uetz said.

And when male spiders come into visual range, they bounce and rattle their legs on the leaf litter to create vibrations that can travel some considerable distance to the legs of potential mates. The males also wave their front legs in a unique pattern to captivate females. 
The males of the species have especially furry front legs that look like black woolen leg warmers. The combination of thick fur and vigorous dancing are indicators that the male is fit and healthy, Uetz said.


“The displays and the decorations show off male quality,” Uetz said. “The males that display vigorous courtship and robust leg tufts are showing off their immune competence and overall health. They, in turn, will have sons that have those qualities.”


UC professor George Uetz discusses his research in his lab. 
That is, if they live so long. Many birds, including blue jays, find spiders to be tasty. And a chemical called taurine found in spiders is especially important for the neurological development of baby birds, he said.


“The birds selectively feed on spiders in early days of nestling development because spiders contain significantly more taurine than insects do,” Uetz said. “And taurine is associated with the development of spatial memory in the hippocampus of developing birds.”


Spatial memory helps birds recall where they cached food or built their nest.

Spiders instinctively fear predatory birds. In previous studies, Uetz, Clark and UC student Anne Lohrey determined that wolf spiders would freeze in place when they detected the sharp, loud calls of blue jays, cardinals and other insect-eating birds. By comparison, they ignored the calls of seed-eating birds such as mourning doves along with background forest noises such as the creak of katydids.


“They clearly recognized these birds as some kind of threat,” Uetz said. “Robins will hunt them on the ground. Lots of other birds do, too. Turkeys will snap them up.”


Before the spider study, Rubi was using a captive colony of blue jays at the University of Minnesota to explore how birds distinguish good prey choices from bad ones such as monarch butterflies.


“Monarchs are toxic, so blue jays that eat them will get very sick. They learn to avoid them,” she said.

Rubi wanted to know whether the birds recognized a toxic insect’s bold colors or its distinctive geometric pattern. She found out that jays used both.


“In the wild, a butterfly’s colors could be hard to see in dim light. Or they could be in the thick foliage where color is more important,” she said. “So having the ability to use both color and pattern is advantageous.”

When Uetz proposed a spider experiment, it wasn’t hard to train the blue jays, Rubi said. The jays quickly learned to peck at different buttons when they either observed a spider or didn’t see one on a video screen.

“Birds are super visual. They have excellent color vision and good visual acuity. It’s not surprising they would have no trouble seeing spiders in motion,” she said.

Rubi now studies genetic evolution at the University of Victoria in British Columbia. 
If natural selection means the most avid courting spiders are also most likely to get eaten, why does this behavior persist across generations? Wouldn’t meeker spiders survive to pass along their genes?

Rubi said the explanation lies in another selective force.

In genetic terms, Rubi said, fitness is measured in the number of healthy offspring produced. So while staying alive by minimizing risk is a good strategy for the individual, it’s not a viable strategy for the species. 
“The longest-lived male can still have a fitness of ‘zero’ if he never mates,” Rubi said. “So there appears to be a trade-off between being safe and being sexy. That balance is what shapes these courtship displays.


Uetz said female wolf spiders can be very choosy about the qualities they value in a mate.

“The tufts on their forelegs are very important. Their size and symmetry play a big role,” he said. “They’re so tiny and have brains the size of a poppy seed. You wouldn’t think they could discriminate, but they do.”

And at least for successful male wolf spiders living in a hostile world, this means love wins over fear. Did you find it? If so, you are better than a blue jay. UC's experiment found that jays had trouble spotting spiders that froze. They had far less trouble finding spiders engaged in courtship behaviors. Photo/Provided