Virginia Tech researchers discovered that wheat plants "sneezing" off condensation can vastly impact the spread of spore-borne diseases, such as wheat leaf rust, which can cause crop yield losses of up to 20 percent or more in the United States and higher average losses in less developed agricultural nations.

Dew droplets gather wheat leaf rust spores. When the droplets merge, they convert surface tension into kinetic energy and 'jump' from the leaf surface. If these droplets get past the boundary layer of the leaf, typically about 1 millimeter, they can be taken by the wind and deposited on other plants nearby or in other fields or even farms. 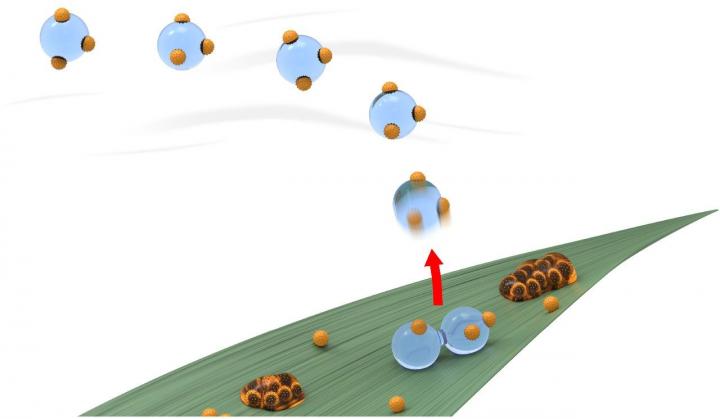 The study, published June 19, and featured on the cover of the Journal of the Royal Society Interface, is part of a three-year grant obtained from the U.S. Department of Agriculture's National Institute of Food and Agriculture to study the dispersal of wheat pathogens by rain splash and jumping-droplet condensation.

"Professor Schmale had seen some of the work we've been doing on condensation and was curious to see what we could learn about condensation on wheat leaves," said Boreyko. "The project didn't start with any expectations, but people already knew that rain splash and wind caused pathogenic spores to be removed from plants and spread to others, and we wanted to see if condensation might also have a role to play in spore dispersal."

The students involved in the study were told not to expect jumping droplets in their condensation tests, as the droplets are known to only occur on specific surfaces, namely superhydrophobic surfaces normally associated with exotic materials, such as lotus leaves and gecko skin. Superhydrophobic surfaces are non-wetting, and when spherical condensate grows, droplets merge together to release surface tension, which is converted into kinetic energy, which propels them from the surface.

"Conceptually, what the plants are doing is sneezing," Boreyko said. "The jumping droplets, at the rate of 100 or more an hour, are a violent expulsion of dew from the surface. It's good for the plant because it is removing spores from itself, but it's bad because, like a human sneeze, the liquid droplets are finding their way onto neighboring plants. Like a cold, it's easy to see how a single infected plant could propagate a disease across an entire crop."

"We wanted to find out, first if the condensation droplets can carry spores, and while 90 percent of them carry only a single spore, we have seen instances where a droplet has carried as many as 11," Ahmadi said. "We also looked at how high the spores can jump and whether they can get past the boundary layer of the leaf."

The boundary layer, which is about a millimeter thick, is the region of air near the leaf's surface where the wind doesn't affect the droplet. If the kinetic energy from merging moves the jumping droplet above the boundary layer, the droplet can be taken by the wind. Depending upon the wind speed, it's feasible for the droplet to then be moved great distances, including to neighboring fields or farms.

"Using water-sensitive paper we measured how high the droplets can jump," Ahmadi said. "A blue dot on the paper shows us a droplet, and a reddish dot shows us a spore, so in this way we can calculate both the height and the number of spores in the droplet."

The droplets in Ahmadi's tests routinely jumped from 2-5 millimeters from the surface of the leaf, well above the distance necessary to be taken by the wind to be re-deposited elsewhere.

"It's important to realize these droplets are microscopic in size," explained Boreyko. "Each droplet is about the same size as the thickness of a human hair - about 50 micrometers - so this is all happening at a scale we don't notice. A 0.1 meter per second wind can support the weight of a jumping droplet, whereas a droplet directly on the leaf requires a wind of 10 meters per second - 100 times stronger to be removed. Once it's in the wind, there is, hypothetically, no limit to how far it can be carried."

The low wind speed needed to carry the droplets means that the spore-ridden dew drops can have a large impact on crop health over a very wide area. "We know now that wind and rain aren't the only factors in the spread of disease among crops," Boreyko said.

The next phase of the continuing experiment for Boreyko and his team is to see how far the wind can carry the spore-bearing droplets. Using water-sensitive paper spread out in varying distances from a wheat leaf, the team will use fans to simulate wind and collect data on droplet and spore dispersal.