ALMA image of the protoplanetary disk around the young star TW Hydrae. A small clump of dust was found in the southwestern (bottom right) part of the otherwise highly symmetric disk. 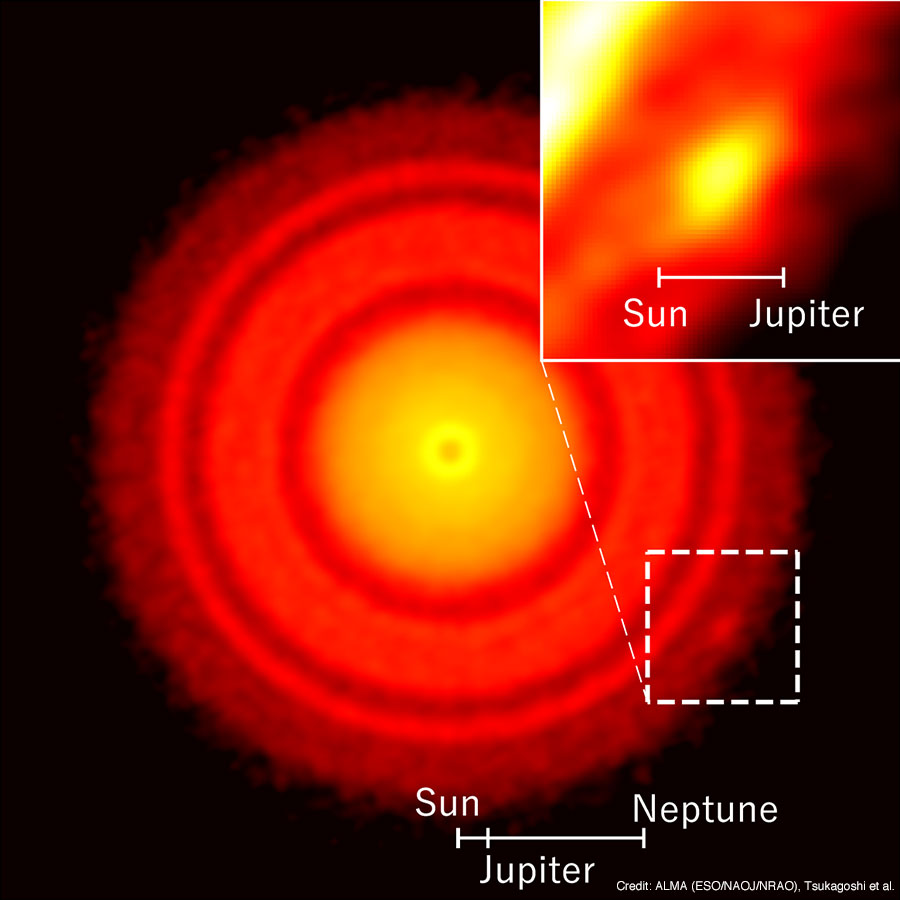 Researchers using ALMA (Atacama Large Millimeter/submillimeter Array) found a small dust concentration in the disk around TW Hydrae, the nearest young star. It is highly possible that a planet is growing or about to be formed in this concentration. This is the first time that the exact place where cold materials are forming the seed of a planet has been pinpointed in the disk around a young star.

The young star TW Hydrae, located194 light-years away in the constellation Hydra, is the closest star around which planets may be forming. Its surrounding dust disk is the best target to study the process of planet formation.

Previous ALMA observations revealed that the disk is composed of concentric rings. Now, new higher sensitivity ALMA observations revealed a previously unknown small clump in the planet forming disk. The clump is elongated along the direction of the disk rotation, with a width approximately equal to the distance between the Sun and the Earth, and a length of about four-and-a-half times that.

“The true nature of the clump is still not clear,” says Takashi Tsukagoshi at the National Astronomical Observatory of Japan and the lead author of the research paper. “It could be a ‘circumplanetary’ disk feeding a Neptune-sized infant planet. Or it might be that swirling gas is raking up the dust particles.”

Planets form in disks of gas and dust around young stars. Micrometer-sized dust particles stick together to grow to larger grains, rocks, and finally a planet. Theoretical studies predict that an infant planet is surrounded by a ‘circumplanetary’ disk, a small structure within the larger dust disk around the star. The planet collects material through this circumplanetary disk. It is important to find such a circumplanetary disk to understand the final stage of planet growth.

Cold dust and gas in the disks around young stars are difficult to see in visible light, but they emit radio waves. With its high sensitivity and resolution for such radio waves, ALMA is one of the most powerful instruments to study the genesis of planets.

However, the brightness and elongated shape of the structure revealed by ALMA don’t exactly match theoretical predictions for circumplanetary disks. It might be a gas vortex, which are also expected to form here and there around a young star. Finding only a single dust clump at this time is also contrary to theoretical studies. So the research team could not reach a definitive answer on the nature of the dusty clump.

“Although we do not have a robust conclusion,” says Tsukagoshi. “Pinpointing the exact place of planet formation is highly valuable to us. Next we’ll obtain even higher resolution ALMA images to reveal the temperature distribution in the clump to look for hints of a planet inside. Also we plan to observe it with the Subaru Telescope in infrared to see if there is hot gas around a potential planet.”

These observation results were published as T. Tsukagoshi et al. “Discovery of an au-scale excess in millimeter emission from the protoplanetary disk around TW Hya” in the Astrophysical Journal Letters on June 10, 2019.Related Press Releases