Immature amygdala neurons (green and red) in a 13-year-old brain. As the brain's mood circuits mature during adolescence, most of these cells would be replaced by mature neurons (blue). 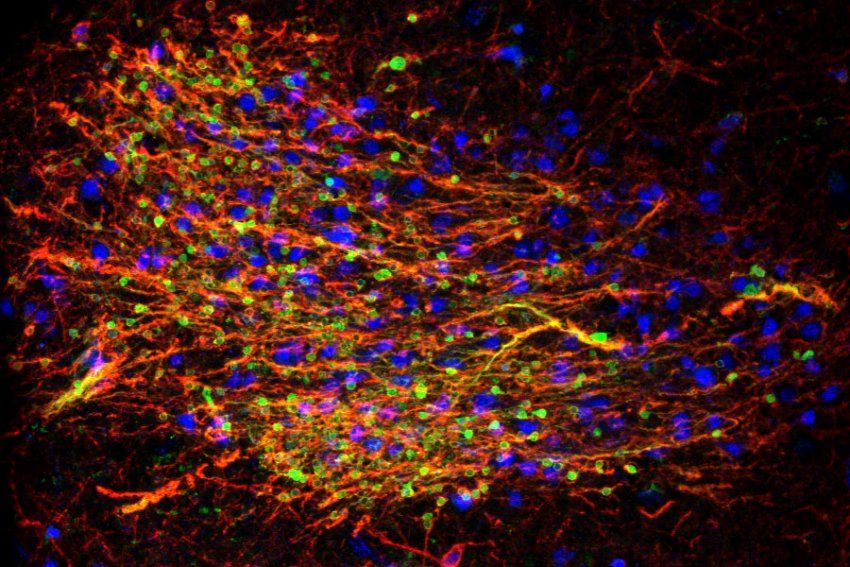 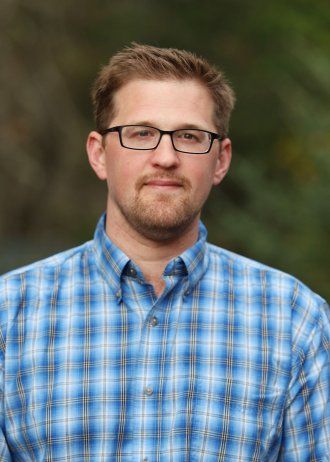 “Most brain cells have matured far beyond this stage by the time you are born,” said study lead author Shawn Sorrells, PhD, a former UCSF researcher who is now assistant professor of neuroscience at the University of Pittsburgh. “It’s fascinating that these are some of the very last cells to mature in the human brain, and most do so during puberty, precisely when huge developments in emotional intelligence are going on.”

The amygdala is an almond-shaped brain structure located deep in the brain’s temporal lobes (you actually have two, one on each side of the brain) that plays a key role in learning appropriate emotional responses to our environment. During childhood and adolescence – long after most of the rest of the human brain is finished growing – the amygdala continues to expand by as many as two million neurons, a late growth spurt that researchers believe is likely to play a key role in human emotional development, and which may go awry in neurodevelopmental disorders. For example, this expansion is absent in children with autism, and mood disorders that frequently emerge in adolescence, such as depression, anxiety, bipolar disorder, and post-traumatic stress disorder (PTSD), have also been linked to problems with amygdala development.

Recent studies had detected a unique group of immature neurons in a region of the amygdala called the paralaminar nuclei (PL), which could help explain the amygdala’s rapid growth, but researchers had little idea where these cells came from or what role they play in mature brain circuits – even whether they are excitatory or inhibitory, the two main functional classes of neurons. 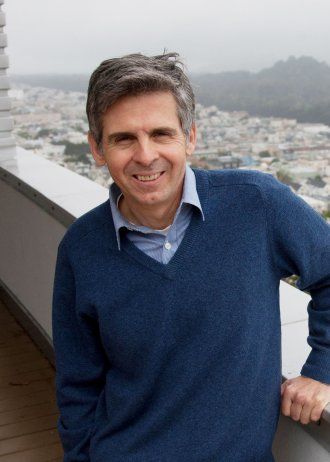 In the new study, published June 21, 2019, in Nature Communications, researchers from the lab of Arturo Alvarez-Buylla, PhD, the Heather and Melanie Muss Endowed Chair and Professor of Neurological Surgery and a member of the Eli and Edyth Broad Center of Regeneration Medicine and Stem Cell Research at UCSF, set out to understand the identity of these cells and their role in the amygdala’s rapid growth during childhood.

The researchers examined postmortem human amygdala tissue from 49 human brains – ranging in age from 20 gestational weeks to 78 years of age. Using both anatomical and molecular techniques to classify individual neurons’ maturity and function within neural circuits, they found that the percentage of immature cells in the PL region of the amygdala remains high throughout childhood, but declines rapidly during adolescence: from birth to age 13, the number of immature cells declines from approximately 90 percent to just under 70 percent, but by the end of adolescence, only about 20 percent of PL cells remain immature.

Based on quantification of neurons in different stages of development coupled with analysis of gene expression patterns in individual neurons extracted from PL, the researchers showed that as the immature cells disappear, they are replaced by mature excitatory neurons – suggesting that the cells have taken their place in the amygdala’s maturing emotion processing circuitry. Since this is the first time these neurons have been clearly studied, scientists don’t know exactly what function the neurons serve, but the timing of their maturation suggests they may play a role in the rapid emotional development that occurs during human adolescence.

Researchers found that the percentage of immature cells in a region of the amygdala remains high throughout childhood, but declines rapidly during adolescence. Immature (green and blue) and mature (red) amygdala neurons in a 13-year-old brain. 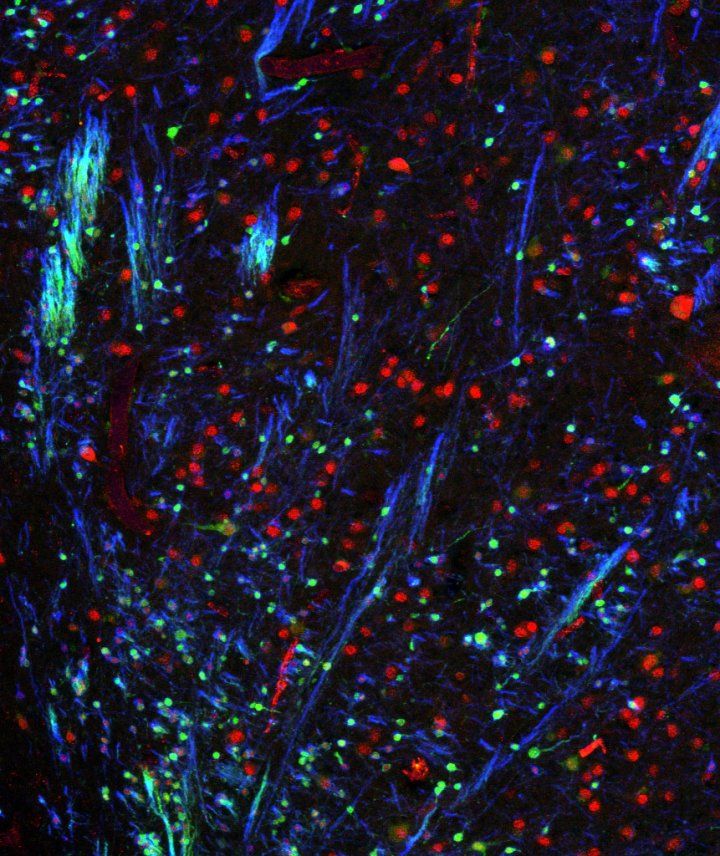 “Anyone who’s met a teenager knows that they are going through a rapid and sometimes tumultuous process of emotional learning about how to respond to stress, how to form positive social bonds, and so on,” Sorrells said. “At the same time, adolescence is when many psychiatric disorders known to involve the amygdala first manifest, suggesting that perhaps something has gone wrong with the normal process of emotional and cognitive development – though whether these cells are involved is a matter for future study."

Notably, the researchers also found that some immature neurons appear to remain in the amygdala throughout life, and were even found in one 77-year-old brain. These results were in stark contrast to the hippocampus – a nearby structure in which the authors recently found that newborn and immature neurons decline to undetectable levels by adolescence.

“This is consistent with what we have seen before: that immature neurons are vanishingly rare in the adult hippocampus, but they do appear to persist in the amygdala,” Alvarez-Buylla said. “As far as we can tell, these cells aren’t being born throughout life, but seem to be maintained in an immature state from birth, though we can’t say this for sure given the techniques we’ve used here.”

In other animals, such as mice, new neurons continue to be born throughout life in the memory-forming hippocampus – and possibly at low rates in the amygdala – which researchers believe allows the brain to continuously rewire neural circuits to adapt to new experiences and environments. Following on the authors’ 2018 study showing that the birth of new neurons declines in the human brain during childhood and is very rare or absent in adults, the new study suggests that the human brain may maintain reserves of immature neurons throughout life, using these “Peter Pan” cells in a similar manner to the neurogenesis seen in other species – as new cells to be called on as needed to keep the brain’s emotional responses flexible and adaptable into old age.

“You could imagine these immature cells let the brain continue to sculpt the structure of neural circuits and their growth once you are out in the world experiencing what it’s like,” Sorrells said. “Of course, that’s just speculation at this point – one of the fascinating questions these findings open up for future study.”

Whether new neurons are born in the adult primate or human brain remains controversial. In 2018, Alvarez-Buylla, Sorrells and colleagues published results of the most rigorous search yet for new neurons in the human hippocampus, and they found that the birth of new neurons declined rapidly in childhood and was undetectable in adults.

Subsequently, other groups published data that appears to show newborn neurons in the adult human hippocampus, but Alvarez-Buylla and colleagues believe these studies rely too strongly on a small number of molecular markers for newborn neurons. They have shown that these markers can also be found in fully mature neurons and in non-neuronal cells called glia – which are known to continue dividing throughout life.

“Identifying new neurons is technically very challenging,” Alvarez-Buylla said. “It’s easy to forget that the molecular markers we use to identify particular molecules are not produced for our benefit – cells are using these molecules for their own biological needs, which are always going to be messy from the perspective of someone looking for simple classification. This is why we have endeavored to examine as many lines of evidence as possible – not just molecular markers but also cells’ shape and appearance – to make sure we are confident in what types of cells we are actually looking at in these analyses.”

The new study in the amygdala uses comprehensive single-cell gene expression techniques to sensitively detect immature neurons based on multiple lines of molecular evidence, and reinforces the group’s earlier findings in the hippocampus – showing that the precursors that divide to give birth to new neurons disappear within the first two years of life in the human amygdala, and that most immature neurons disappear during adolescence.

“Single-cell sequencing not only clearly identifies these long-lived immature neurons, but also shows that they express many developmental genes involved in axon development, synaptogenesis, dendrite morphogenesis, and even neuronal migration,” Sorrells said. “These cells could be erroneously assumed to be newborn neurons, but based on our developmental perspective, and the fact that we see few dividing cells present nearby, it looks as though they are already present at birth and decline throughout life.”

Disclosures: Alvarez Buylla and co-authors Kriegstein and Rubenstain are co-founders and serve on the scientific advisory board of Neurona Therapeutics.