Stone tools were repeatedly invented millions of years ago. 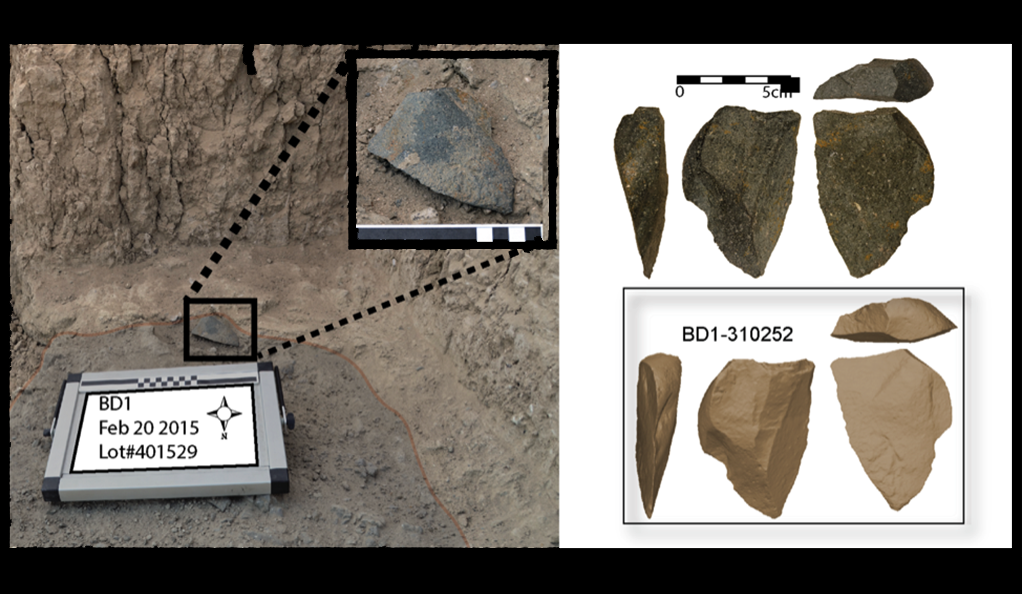 The researchers’ findings, published June 3 in the Proceedings of the National Academy of Sciences, suggest that different species of early human ancestors throughout Africa invented stone tools independently of each other over the course of at least 700,000 years. By 2.6 million years ago, tool production had become an integral part of the human condition, the researchers noted.

The flaked-stone tools are the oldest artifacts yet ascribed to the “Oldowan Tradition,” a technology originally named after finds made by Louis Leakey from Olduvai Gorge in Tanzania. They also are distinct from simpler tools made by chimpanzees, monkeys, and earlier human ancestors, according
to the study.

Archaeologists from the Max Planck Institute, and the Ethiopian Authority for Research and the Conservation of Cultural Heritage as well as geologists from University of Algarve study the sediments at the Bokol Dora site. Stones were placed on the contact surface during the excavation to preserve the fragile stratigraphic contacts. 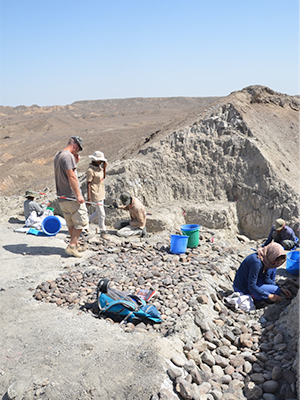 “It was thought that the first stone tools were very simple, and were created by smashing one rock against another while it sat on the ground, very similar to how chimpanzees crack nuts,” said Jessica Thompson, assistant professor of anthropology at Yale University and a co-author of the study. “Then, the Oldowan would have just been an elaboration of this. But it turns out that it takes quite a bit of know-how, as well as motor control, to hold two stones together and fracture one to create a sharp edge in a predictable way, like we see in the Oldowan. The technology is actually more complex than initially thought, but there were so few early Oldowan sites that it was difficult to track its emergence.”

The newest examples of sharp-edged tools were excavated at Bokol Dora 1, or BD 1, a site located in the Afar region of northeastern Ethiopia near Ledi-Geraru, where the oldest fossil attributed to the human genus Homo was discovered in 2013. That fossil, a jawbone, dates to about 2.78 million years ago. This new discovery narrows the gap between the fossil and oldest-known Oldowan tools and sheds light on the connection between the origins of the human genus and the genesis of the systematic production of stone tools, said Thompson.

Thompson’s role in the project was to examine fossilized animal bones found with the stone tools for any signs of butchery, such as cut marks from stone tools. The surfaces had been degraded or covered in a hard crust that made it difficult to discern if any such marks were present. Evidence of butchery would have provided clues as the the tools’ purpose, Thompson explained.

The earliest known stone tools were discovered in Kenya and date to 3.3 million years ago. Described as “Lomekwian,” they were percussive tools used for hammering. Archaeologists working at the BD 1 site expected to see some indication of an evolution from the Lomekwian to these earliest Oldowan tools but their analysis yielded very little connection to evidence from older archaeological sites or to the simple tools used by modern primates, including monkeys and apes.

“Something changed by 2.6 million years ago, and our ancestors became more accurate and skilled at striking the edge of stones to make tools,” said Will Archer of the Max Planck Institute for Evolutionary Anthropology in Leipzig and the University of Cape Town, a co-author of the study. “The artifacts at BD 1 capture this shift.”

The tool-making shift appears to have occurred around the time that human ancestors’ teeth began to become smaller, a transformation seen in the Homo jaw from Ledi-Geraru, Archer said.

“As our ancestors began to process food prior to eating by using using stone tools, we start to see a reduction in the size of their teeth,” he said, “It shows that our technology and biology were intimately intertwined even as early as 2.6 million years ago.” Blade Engda of the University of Poitiers in France lifts an artifact from 2.6 million year old sediment exposing an imprint of the artifact on the ancient surface below. 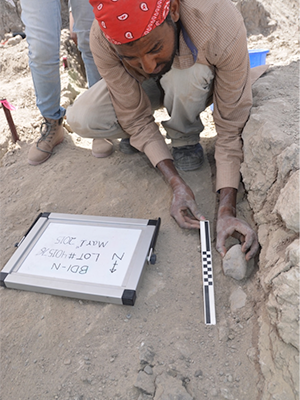 The lack of a clear connection with earlier stone-tool technology suggests that tool use was invented multiple times in the past, said David Braun, an archaeologist with George Washington University and the paper’s lead author.

“Given that primate species throughout the world routinely use stone hammers to forage for new resources, it seems very possible that throughout Africa many different human ancestors found new ways of using stone artifacts to extract resources from their environment,” Braun said. “If our hypothesis is correct then we would expect to find some type of continuity in artifact form after 2.6 million years ago, but not prior to this time period. We need to find more sites.”

Continued field investigations at the Ledi-Geraru project area are already producing more insights into the behavioral patterns of our earliest ancestors. New sites have already been found, and the Ledi-Geraru team will begin excavating them this year.

This research was supported by the United States National Science Foundation and the John Templeton Foundation.'