How an Atomic Clock Will Get Humans to Mars on Time

NASA navigators are helping build a future where spacecraft could safely and autonomously fly themselves to destinations like the Moon and Mars.

Navigators today tell a spacecraft where to go by calculating its position from Earth and sending the location data to space in a two-way relay system that can take anywhere from minutes to hours to deliver directions. This method of navigation means that no matter how far a mission travels through the solar system, our spacecraft are still tethered to the ground, waiting for commands from our planet.

The Deep Space Atomic Clock, a new technology from NASA's JPL, may change the way spacecraft navigate in space. Launching in late June aboard the Orbital Test Bed satellite, on the SpaceX's Falcon Heavy rocket, descendants of the technology demonstration could be a key component of a self-driving spacecraft and a GPS-like navigation system at other worlds. 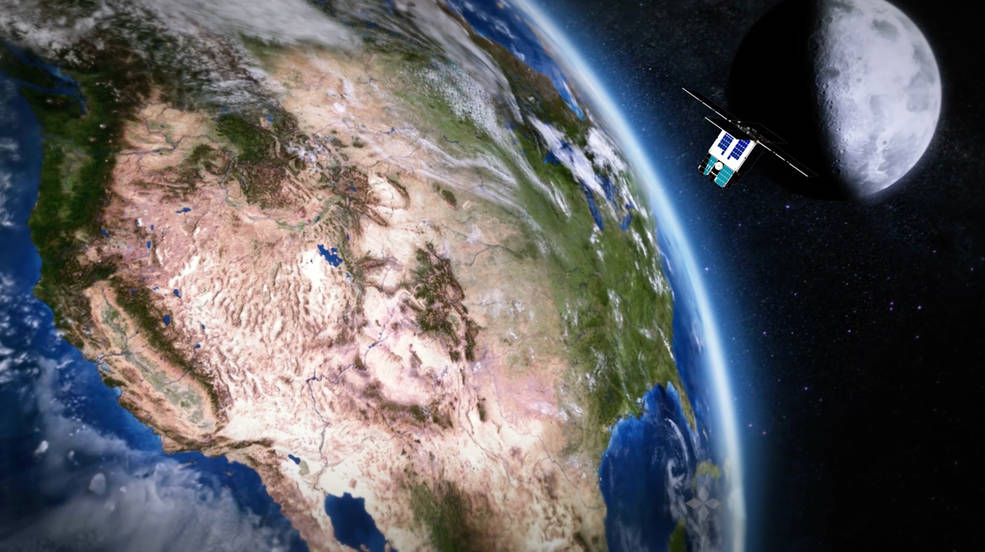 That limitation poses obvious problems for a future crewed mission to another planet. How can astronauts navigate far from Earth if they don't have immediate control over where they're going? And how can they accurately land on another planet when there's a communication delay that affects how quickly they can adjust their trajectory into the atmosphere?

NASA's Deep Space Atomic Clock is a toaster-size device that aims to answer those questions. It's the first GPS-like instrument small and stable enough to fly on a spacecraft. The technology demonstration enables the spacecraft to know where it is without needing to rely on that data from Earth. In late June, the clock will launch on the SpaceX Falcon Heavy rocket into Earth's orbit for one year, where it will test whether it can help spacecraft locate themselves in space.

If the Deep Space Atomic Clock's trial year in space goes well, it could pave the way for a future of one-way navigation in which astronauts are guided by a GPS-like system across the surface of the Moon or can safely fly their own missions to Mars and beyond.


There's No GPS in Deep Space

Atomic clocks in space aren't new. Every GPS device and smartphone determines its location via atomic clocks on satellites orbiting Earth. The satellites send signals from space, and the receiver triangulates your position by measuring how long the signals take to reach your GPS.

Currently, spacecraft flying beyond Earth's orbit don't have a GPS to find their way through space. Atomic clocks on GPS satellites aren't accurate enough to send directions to spacecraft, when being off by even less than a second could mean missing a planet by miles.

Instead, navigators use giant antennas on Earth to send a signal to the spacecraft, which bounces it back to Earth. Extremely precise clocks on the ground measure how long it takes the signal to make this two-way journey. The amount of time tells them how far away the spacecraft is and how fast it's going. Only then can navigators send directions to the spacecraft, telling it where to go.

"It's the same exact concept as an echo," said Seubert. "If I'm standing in front of a mountain and I shout, the longer it takes for the echo to come back to me, the farther away the mountain is."

Two-way navigation means that no matter how deep into space a mission goes, it still has to wait for a signal carrying commands to cross the vast distances between planets. It's a process made famous by Mars landings like Curiosity, when the world waited 14 long minutes with mission control for the rover to send the message that it landed safely. That delay is an average wait time: Depending on where Earth and Mars are in their orbits, it can take anywhere from 4 to 20 minutes for a one-way signal to travel between planets.

It's a slow, laborious way to navigate in deep space, one that ties up the giant antennas of NASA's Deep Space Network like a busy phone line. During this exchange, a spacecraft flying at tens of thousands of miles per hour could be in an entirely different place by the time it "knows" where it is.

A Better Way to Navigate

An atomic clock small enough to fly on a mission but precise enough to give accurate directions could eliminate the need for this two-way system. Future navigators would send a signal from Earth to a spacecraft. Like its Earthly cousins, the Deep Space Atomic Clock onboard would measure the amount of time it took that signal to reach it. The spacecraft could then calculate its own position and trajectory, essentially giving itself directions.

"Having a clock onboard would enable onboard radio navigation and, when combined with optical navigation, make for a more accurate and safe way for astronauts to be able to navigate themselves," said Deep Space Atomic Clock Principal Investigator Todd Ely.

This one-way navigation has applications for Mars and beyond. DSN antennas would be able to communicate with multiple missions at a time by broadcasting one signal into space. The new technology could improve the accuracy of GPS on Earth. And multiple spacecraft with Deep Space Atomic Clocks could orbit Mars, creating a GPS-like network that would give directions to robots and humans on the surface.

"The Deep Space Atomic Clock will have the ability to aid in navigation, not just locally but in other planets as well. One way to think of it is as if we had GPS at other planets," said Eric Burt, the ion clock development lead.

Burt and fellow JPL clock physicists Robert Tjoelker and John Prestage created a mercury ion clock, which maintains its stability in space in the same way as refrigerator-size atomic clocks on Earth. In lab tests, the Deep Space Atomic Clock proved to be 50 times more accurate than GPS clocks. That's an error of 1 second every 10 million years.

The clock's demonstration in space will determine whether it can remain stable in orbit. If it does, a Deep Space Atomic Clock could fly on a mission as early as the 2030s. The first step toward self-driving spacecraft that could one day carry humans to other worlds.

The Deep Space Atomic Clock is hosted on a spacecraft provided by General Atomics Electromagnetic Systems of Englewood, Colorado. It is sponsored by the Technology Demonstration Missions program within NASA's Space Technology Mission Directorate and the Space Communications and Navigations program within NASA's Human Exploration and Operations Mission Directorate. JPL manages the project.

NASA has perfected new navigation technology that would make self-driving spacecraft and GPS beyond the Moon a reality. The Deep Space Atomic Clock is the first atomic clock small and stable enough to fly on a spacecraft beyond Earth's orbit. As NASA works to put humans on Mars and the Moon, the clock’s precise timekeeping will be key to these missions’ success.


NASA is sending a new technology to space in late June that will change the way we navigate our spacecraft — even how we send astronauts to Mars and beyond. Built by NASA's Jet Propulsion Laboratory in Pasadena, California, the Deep Space Atomic Clock is a technology demonstration that will help spacecraft navigate autonomously through deep space. No larger than a toaster oven, the instrument will be tested in Earth orbit for one year, with the goal of being ready for future missions to other worlds.

The Deep Space Atomic Clock is a sibling of the atomic clocks you interact with every day on your smart phone. Atomic clocks aboard satellites enable your phone's GPS application to get you from point A to point B by calculating where you are on Earth, based on the time it takes the signal to travel from the satellite to your phone.

But spacecraft don't have GPS to help them find their way in deep space; instead, navigation teams rely on atomic clocks on Earth to determine location data. The farther we travel from Earth, the longer this communication takes. The Deep Space Atomic Clock is the first atomic clock designed to fly onboard a spacecraft that goes beyond Earth's orbit, dramatically improving the process.

It will help our spacecraft navigate autonomously

Today, we navigate in deep space by using giant antennas on Earth to send signals to spacecraft, which then send those signals back to Earth. Atomic clocks on Earth measure the time it takes a signal to make this two-way journey. Only then can human navigators on Earth use large antennas to tell the spacecraft where it is and where to go.

If we want humans to explore the solar system, we need a better, faster way for the astronauts aboard a spacecraft to know where they are, ideally without needing to send signals back to Earth. A Deep Space Atomic Clock on a spacecraft would allow it to receive a signal from Earth and determine its location immediately using an onboard navigation system.

It loses only 1 second in 10 million years

Any atomic clock has to be incredibly precise to be used for this kind of navigation: A clock that is off by even a single second could mean the difference between landing on Mars and missing it by miles. In ground tests, the Deep Space Atomic Clock proved to be up to 50 times more stable than the atomic clocks on GPS satellites. If the mission can prove this stability in space, it will be one of the most precise clocks in the universe.

Your wristwatch and atomic clocks keep time in similar ways: by measuring the vibrations of a quartz crystal. An electrical pulse is sent through the quartz so that it vibrates steadily. This continuous vibration acts like the pendulum of a grandfather clock, ticking off how much time has passed. But a wristwatch can easily drift off track by seconds to minutes over a given period.

An atomic clock uses atoms to help maintain high precision in its measurements of the quartz vibrations. The length of a second is measured by the frequency of light released by specific atoms, which is same throughout the universe. But atoms in current clocks can be sensitive to external magnetic fields and temperature changes. The Deep Space Atomic Clock uses mercury ions — fewer than the amount typically found in two cans of tuna fish — that are contained in electromagnetic traps. Using an internal device to control the ions makes them less vulnerable to external forces.

It will launch on a SpaceX Falcon Heavy rocket

The Deep Space Atomic Clock will fly on the Orbital Test Bed satellite, which launches on the SpaceX Falcon Heavy rocket with around two dozen other satellites from government, military and research institutions. The launch is targeted for June 22, 2019, at 8:30 p.m. PDT (11:30 p.m. EDT) from NASA's Kennedy Space Center in Florida and will be live-streamed here:

Learn about the other NASA missions on the SpaceX Falcon Heavy launch that's carrying the Deep Space Atomic Clock:  https://www.nasa.gov/spacex