An undersea aquifer as large as Ogallala Aquifer has been found under the sea off the  US Northeast coast.

Scientists have mapped a huge aquifer off the US Northeast (hatched area). Solid yellow or white lines with triangles show ship tracks. Dotted white line near shore shows edge of the glacial ice sheet that melted about 15,000 years ago. Further out, dark blue, the continental shelf drops off into the Atlantic abyss. 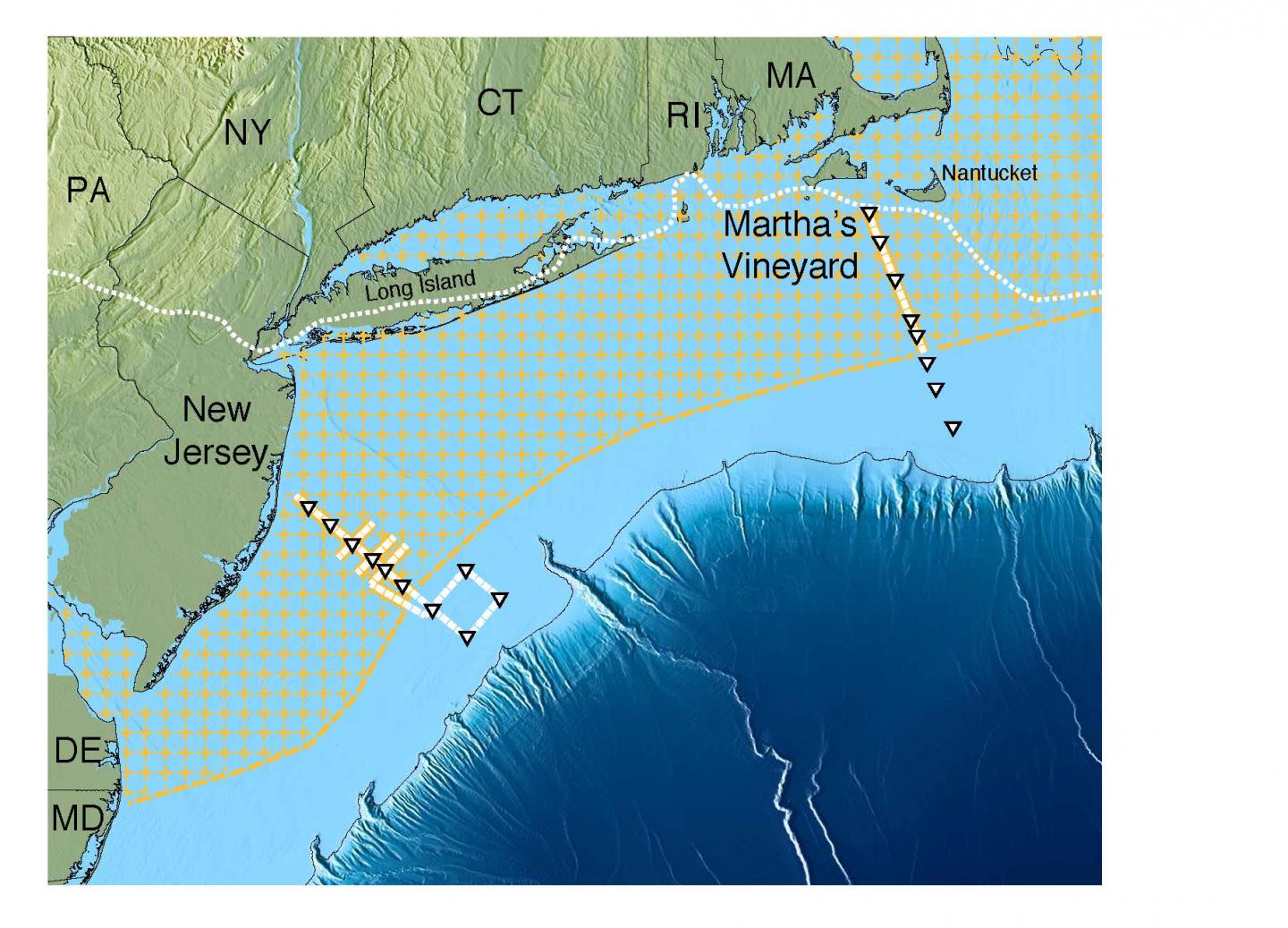 
In a new survey of the sub-seafloor off the U.S. Northeast coast, scientists have made a surprising discovery: a gigantic aquifer of relatively fresh water trapped in porous sediments lying below the salty ocean. It appears to be the largest such formation yet found in the world. The aquifer stretches from the shore at least from Massachusetts to New Jersey, extending more or less continuously out about 50 miles to the edge of the continental shelf.

If found on the surface, it would create a lake covering some 15,000 square miles. The study suggests that such aquifers probably lie off many other coasts worldwide, and could provide desperately needed water for arid areas that are now in danger of running out.

The researchers employed innovative measurements of electromagnetic waves to map the water, which remained invisible to other technologies. “We knew there was fresh water down there in isolated places, but we did not know the extent or geometry,” said lead author Chloe Gustafson, a PhD. candidate at Columbia University’s Lamont-Doherty Earth Observatory. “It could turn out to be an important resource in other parts of the world.” The study appears this week in the journal Scientific Reports.

The first hints of the aquifer came in the 1970s, when companies drilled off the coastline for oil, but sometimes instead hit fresh water. Drill holes are just pinpricks in the seafloor, and scientists debated whether the water deposits were just isolated pockets or something bigger. Starting about 20 years ago, study coauthor Kerry Key, now a Lamont-Doherty geophysicist, helped oil companies develop techniques to use electromagnetic imaging of the sub-seafloor to look for oil. More recently, Key decided to see if some form of the technology could also be used also to find fresh-water deposits.

An electromagnetic receiver used in the study being deployed off the research vessel Marcus Langseth. They dropped receivers to the seafloor to measure electromagnetic fields below, and the degree to which natural disruptions such as solar winds and lightning strikes resonated through them. An apparatus towed behind the ship also emitted artificial electromagnetic pulses and recorded the same type of reactions from the subseafloor.

Both methods work in a simple way: salt water is a better conductor of electromagnetic waves than fresh water, so the freshwater stood out as a band of low conductance. Analyses indicated that the deposits are not scattered; they are more or less continuous, starting at the shoreline and extending far out within the shallow continental shelf — in some cases, as far as 75 miles. For the most part, they begin at around 600 feet below the ocean floor, and bottom out at about 1,200 feet.

The consistency of the data from both study areas allowed to the researchers to infer with a high degree of confidence that fresh water sediments continuously span not just New Jersey and much of Massachusetts, but the intervening coasts of Rhode Island, Connecticut and New York. They estimate that the region holds at least 670 cubic miles of fresh water. If future research shows the aquifer extends further north and south, it would rival the great Ogallala Aquifer, which supplies vital groundwater to eight Great Plains states, from South Dakota to Texas.

The water probably got under the seabed in one of two different ways, say the researchers. Some 15,000 to 20,000 years ago, toward the end of the last glacial age, much of the world’s water was locked up in mile-deep ice; in North America, it extended through what is now northern New Jersey, Long Island and the New England coast. Sea levels were much lower, exposing much of what is now the underwater U.S. continental shelf. When the ice melted, sediments formed huge river deltas on top of the shelf, and fresh water got trapped there in scattered pockets. Later, sea levels rose. Up to now, the trapping of such “fossil” water has been the common explanation for any fresh water found under the ocean.

But the researchers say the new findings indicate that the aquifer is also being fed by modern subterranean runoff from the land. As water from rainfall and water bodies percolates through onshore sediments, it is likely pumped seaward by the rising and falling pressure of tides, said Key. He likened this to a person pressing up and down on a sponge to suck in water from the sponge’s sides. Also, the aquifer is generally freshest near the shore, and saltier the farther out you go, suggesting that it mixes gradually with ocean water over time. Terrestrial fresh water usually contains less than 1 part per thousand salt, and this is about the value found undersea near land. By the time the aquifer reaches its outer edges, it rises to 15 parts per thousand. (Typical seawater is 35 parts per thousand.)

If water from the outer parts of the aquifer were to be withdrawn, it would have to be desalinated for most uses, but the cost would be much less than processing seawater, said Key. “We probably don’t need to do that in this region, but if we can show there are large aquifers in other regions, that might potentially represent a resource” in places like southern California, Australia, the Mideast or Saharan Africa, he said. His group hopes to expand its surveys.