Cicadas can carry a fungus similar to those found in hallucinogenic mushrooms, making them zombie-like fliers.

If cicadas made horror movies, they'd probably study the actions of their counterparts plagued by a certain psychedelic fungus.

The fungus causes cicadas to lose their limbs and eccentric behavior sets in: Males try to mate with everything they encounter, although the fungus has consumed their genitals and butts.

A cicada clings to a blade of grass. 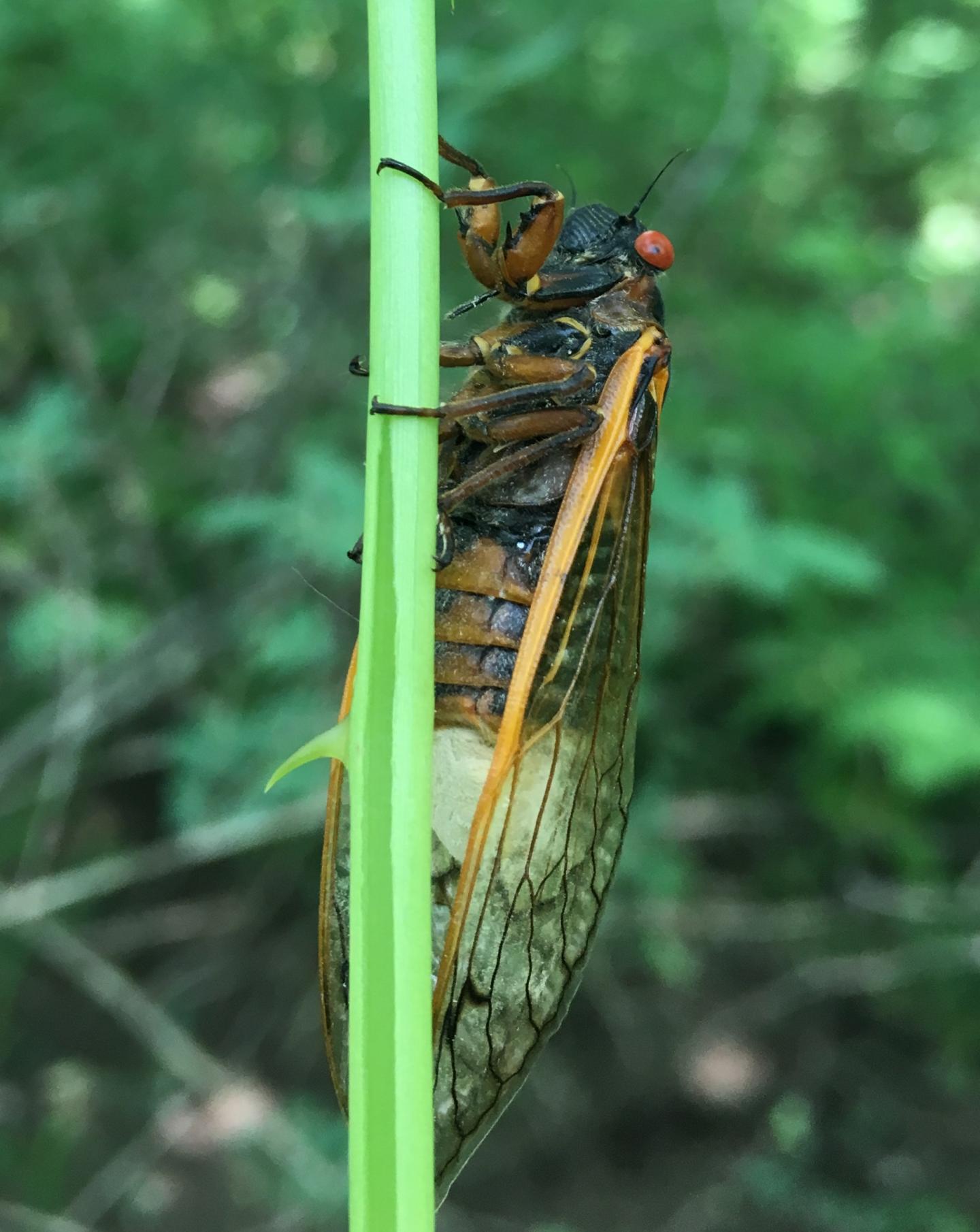 Despite the horrid physical state of infected cicadas, they continue to roam around freely as if nothing's wrong, dousing other cicadas with a dose of their disease.

You've heard of "The Walking Dead." This is "The Flying Dead."

"They are only zombies in the sense that the fungus is in control of their bodies," said Matt Kasson, assistant professor of forest pathology and one of the study's authors.

Cicadas first encounter the fungus underground where they spend 13 to 17 years before emerging to the surface as adults, Kasson said. Within seven to 10 days above ground, the abdomen begins to slough off revealing the fungal infection at the end of the cicada, he continued.

It's quite the coming out party.

Joining Kasson on this research published in Fungal Ecology are his Davis College of Agriculture, Natural Resources and Design colleagues Greg Boyce, Kasson's former Ph.D. student in the Division of Plant and Soil Sciences; and Daniel Panaccione, professor of plant and soil sciences.

The impetus of the study came in 2016 when billions of cicadas ascended upon the northeast United States. Two of Kasson's students loved cicadas. One, Matt Berger, convinced the professor to study the fungus. Another student, Angie Macias, coined a creative, heavy metal sounding name for the cicadas: "flying salt shakers of death." Initially, the research team tried infecting the cicadas in a lab but that method did not work. But they managed to examine enough infected cicadas from the wild to make the new discovery.

For those of you wondering if you can get "high" from the psychedelic chemicals in a Massospora-infected cicada, Kasson's answer is "maybe, if you're motivated enough."

"Here is the thing," he said. "These psychoactive compounds were just two of less than 1,000 compounds found in these cicadas. Yes, they are notable but there are other compounds that might be harmful to humans. I wouldn't take that risk."

Kasson and his team are buzzing along on additional cicada research. They recently collected cicadas from this year's emergence in Pennsylvania and West Virginia. They plan to resequence the genome of the fungus and analyze the gene expression in both healthy and infected cicadas to better understand the genetic aspects of the discovery.

And beyond the discovery being downright creepy and fascinating, it may lead to someday benefiting the greater society instead of serving as nightmare fuel.

"We anticipate these discoveries will foster a renewed interest in early diverging fungi and their pharmacologically important secondary metabolites, which may serve as the next frontier for novel drug discovery.

"I love them (cicadas). They still scare me when they fall down my shirt or walk up my neck but I can appreciate something that spends almost two decades underground for six weeks of bliss, with or without the fungus."