An international team of astronomers has captured the first-ever polarized radio waves from a distant cosmic explosion.

This explosive event (known as gamma-ray burst GRB 190114C) is part of a class of the most energetic explosions in the universe. It was produced when a star — much more massive than our sun — collapsed to form a black hole.

Gamma ray bursts produce powerful jets that travel close to the speed of light and shine with the incredible luminosity of more than a billion suns combined. Astronomers have struggled to understand how these jets are formed and why they seem to appear only in gamma ray bursts — but not other explosions, such as ordinary supernovae.
Video credit: Kitty Yeung (art), Tanmoy Laskar (animation)

Because these jets are extremely bright at radio wavelengths, the discovery of polarized radio signals may offer new clues to help solve this mystery. Polarization is a property of light that indicates how a magnetic field is organized and structured in a jet.

“We know that only a very tiny fraction (less than 1%) of massive stars form jets when they collapse,” said Northwestern University’s Raffaella Margutti, who contributed to the study. “But we have not known how they manage to launch these outflows with such extreme properties, and we don’t know why only a few stars do this.”

“This measurement opens a new window into gamma-ray burst science and the studies of energetic astrophysical jets,” said Tanmoy Laskar, a postdoctoral researcher at the University of Bath in the U.K. and lead author of the study. “We would like to understand whether the low level of polarization measured in this event is characteristic of all gamma-ray bursts and, if so, what this could tell us about the magnetic structures in gamma-ray burst jets and the role of magnetic fields in powering jets throughout the universe.” 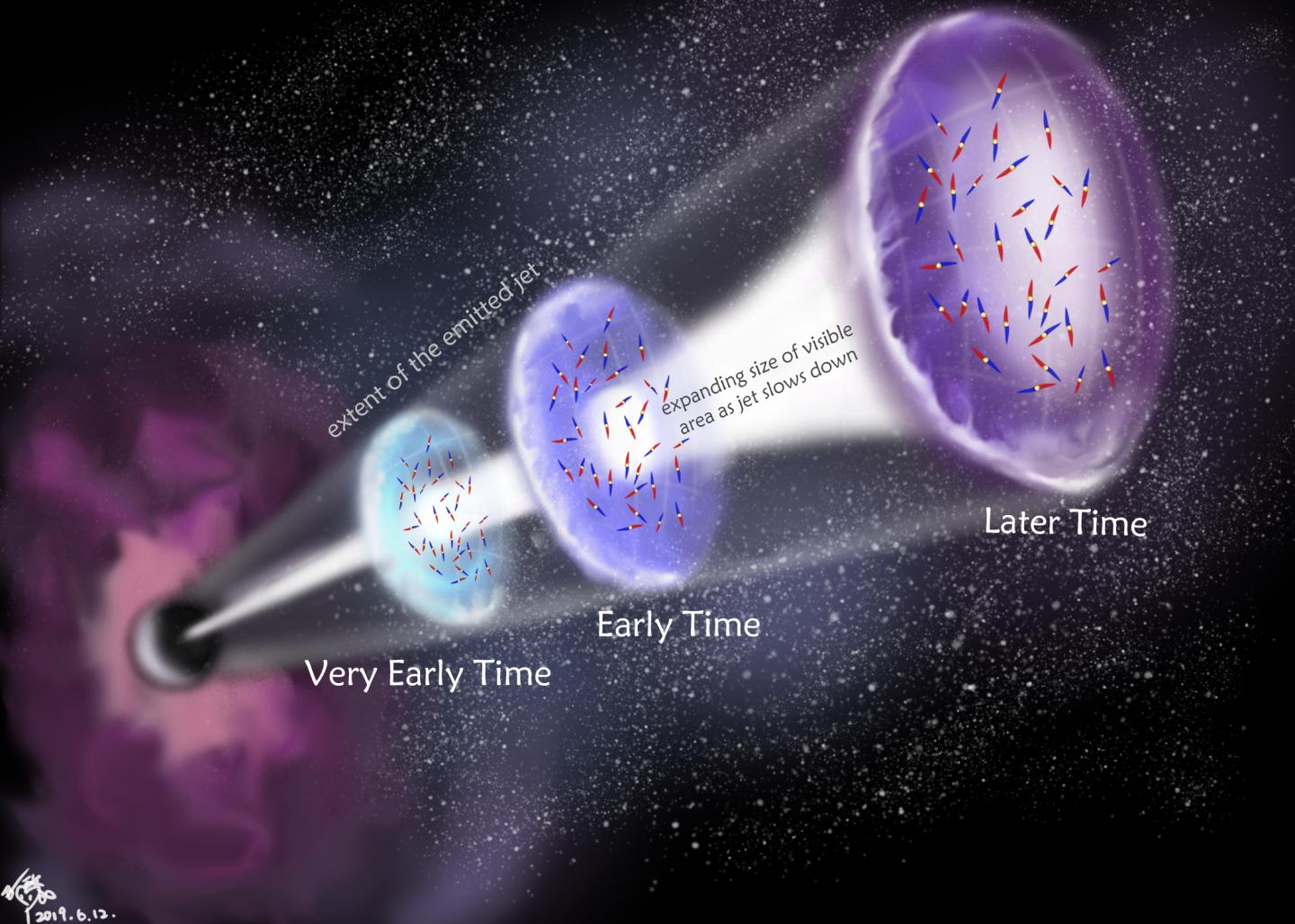 The paper was published last week in The Astrophysical Journal Letters.

The international team included three astrophysicists from Northwestern’s Weinberg College of Arts and Sciences: Kate Alexander, Wen-fai Fong and Margutti. All are members of Northwestern’s Center for Interdisciplinary and Exploratory Research in Astrophysics (CIERA).

Astronomers have hypothesized that cosmic magnetic fields might flow through the jets, helping them form and providing structural support. The physical extent of these magnetic fields, which have implications for the jet launching mechanism, however, had never before been measured.

On January 14, 2019, a flash of gamma rays triggered NASA’s Swift satellite, which alerted astronomers of the burst’s location in the direction of the constellation Fornax. The astronomers then used the Atacama Large Millimeter/Submillimeter Array (ALMA) telescope in Chile to search for radio waves from the explosion, which occurred more than 4.5 billion years ago in a galaxy 7 billion light-years away.

“Magnetic fields are ubiquitous but notoriously difficult to constrain in our universe,” said Fong, an assistant professor of astrophysics. “The fact that we have been able to detect their presence — let alone in the fastest jets we know of — is an incredible and storied feat of observation.”

The team detected a subtle, but revealing, polarization signal of 0.8%, implying magnetic field patches about the size of our solar system. Next, the researchers will combine this new information with data from X-ray and visible light telescopes.

“The lower frequency data from the Very Large Array (VLA) in New Mexico helped confirm that we were seeing the light from the jet itself rather than from the interaction of the jet with its environment,” said Alexander, a NASA Einstein Fellow who led the VLA observations.

“This is a truly remarkable measurement,” said Margutti, “both from the technical side and for its deep scientific implications on the nature of magnetic fields in the most relativistic sources known in our universe.”