Untethered robots suffer from a stamina problem. A possible solution: a circulating liquid – “robot blood” – to store energy and power its applications for sophisticated, long-duration tasks.
Humans and other complex organisms manage life through integrated systems. Humans store energy in fat reserves spread across the body, and an intricate circulatory system transports oxygen and nutrients to power trillions of cells.
But crack open the hood of an untethered robot and things are much more segmented: Over here is the solid battery and over there are the motors, with cooling systems and other components scattered throughout. 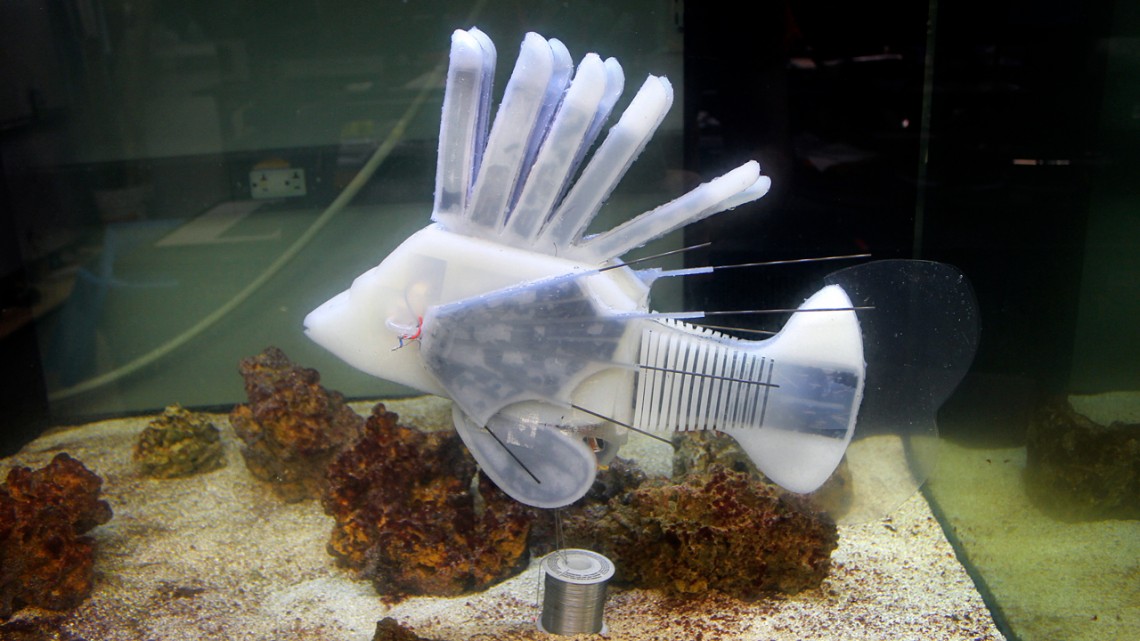 Credit: Cornell University
Cornell researchers have created a synthetic vascular system capable of pumping an energy-dense hydraulic liquid that stores energy, transmits force, operates appendages and provides structure, all in an integrated design.
“In nature we see how long organisms can operate while doing sophisticated tasks. Robots can’t perform similar feats for very long,” said Rob Shepherd, associate professor of mechanical and aerospace engineering. “Our bio-inspired approach can dramatically increase the system’s energy density while allowing soft robots to remain mobile for far longer.”
Shepherd, director of the Organic Robotics Lab, is senior author of “Electrolytic Vascular Systems for Energy Dense Robots,” which published June 19 in Nature. Doctoral student Cameron Aubin is lead author.
Engineers rely on lithium-ion batteries for their dense energy-storage potential. But solid batteries are bulky and present design constraints. Alternatively, redox flow batteries (RFB) rely on a solid anode and highly soluble catholyte to function. The dissolved components store energy until it is released in a chemical reduction and oxidation, or redox, reaction.
Soft robots are mostly fluid – up to around 90% fluid by volume, and many times use hydraulic liquid. Using that fluid to store energy offers the possibility of increased energy density without added weight.
The researchers tested the concept by creating an aquatic soft robot inspired by a lionfish, designed by co-author James Pikul, a former postdoctoral researcher now an assistant professor at the University of Pennsylvania. Lionfish use undulating fanlike fins to glide through coral-reef environments (In one sacrifice to verisimilitude, the researchers opted not to add venomous fins like the robots’ living counterparts).
Silicone skin on the outside and flexible electrodes and an ion separator membrane within allow the robot to bend and flex. Interconnected zinc-iodide flow cell batteries power onboard pumps and electronics through electrochemical reactions. The researchers achieved energy density equal to about half that of a Tesla Model S lithium-ion battery.
The robot swims using power transmitted to the fins from the pumping of the flow cell battery. The initial design provided enough power to swim upstream for more than 36 hours.
Current RFB technology is typically used in large, stationary applications, such as storing energy from wind and solar sources. RFB design has historically suffered from low power density and operating voltage. The researchers overcame those issues by wiring the fan battery cells in series, and maximized power density by distributing electrodes throughout the fin areas.
“We want to take as many components in a robot and turn them into the energy system. If you have hydraulic liquids in your robot already, then you can tap into large stores of energy and give robots increased freedom to operate autonomously,” Shepherd said.
Underwater soft robots offer tantalizing possibilities for research and exploration. Since aquatic soft robots are supported by buoyancy, they don’t require an exoskeleton or endoskeleton to maintain structure. By designing power sources that give robots the ability to function for longer stretches of time, Shepherd thinks autonomous robots could soon be roaming Earth’s oceans on vital scientific missions and for delicate environmental tasks like sampling coral reefs. These devices could also be sent to extraterrestrial worlds for underwater reconnaissance missions.
The work was supported by the Office of Naval Research. Co-authors include Lynden Archer, the James A. Friend Family Distinguished Professor of Engineering in the Smith School of Chemical and Biomolecular Engineering; Snehashis Choudhury, M.Eng. ’14, Ph.D. ’18, currently a postdoctoral researcher at Stanford; and doctoral candidate Rhiannon Jerch.