Can octopuses help us understand how extraterrestrials think?

Of the many papers and presentations scheduled for AbSciCon2019, the conference on astrobiology and the search for life in space happening in Bellevue, Washington, the week of June 24, Dominic Sivitilli's is perhaps unique — he'll discuss his research into how octopuses "think."

More specifically, Sivitilli, a University of Washington doctoral student in behavioral neuroscience in the Department of Psychology, will explain the extraordinary way that octopuses gather information, and even make certain decisions, with their arms — and note the possible astrobiological benefit of learning about "the diversity of forms a mind can take."

The nervous system of an octopus is very diffuse, Sivitilli said, and mostly located in the arms. "When I do my work I look at how the arms are acquiring information from the environment, and how they are collectively making decisions about that information. That's where most of their nervous system is, and it allows them to process massive amounts of information in parallel."

The octopus brain "offloads" some motor decisions to the arms, which are lined with suckers, each of which has tens of thousands of chemical and mechanical receptors, Sivitilli said.

Like other life forms such as ourselves, octopuses have evolved over 500 million years, but in a parallel way to vertebrates and through "entirely different neural architecture."

Sivitilli is a scientific scuba diver. He first studied the smaller red octopus, and then came to the UW's Friday Harbor labs, a perfect place to study the behavior and cognition of much bigger Enteroctopus dofleini, or the giant Pacific octopus — the largest octopus species known. 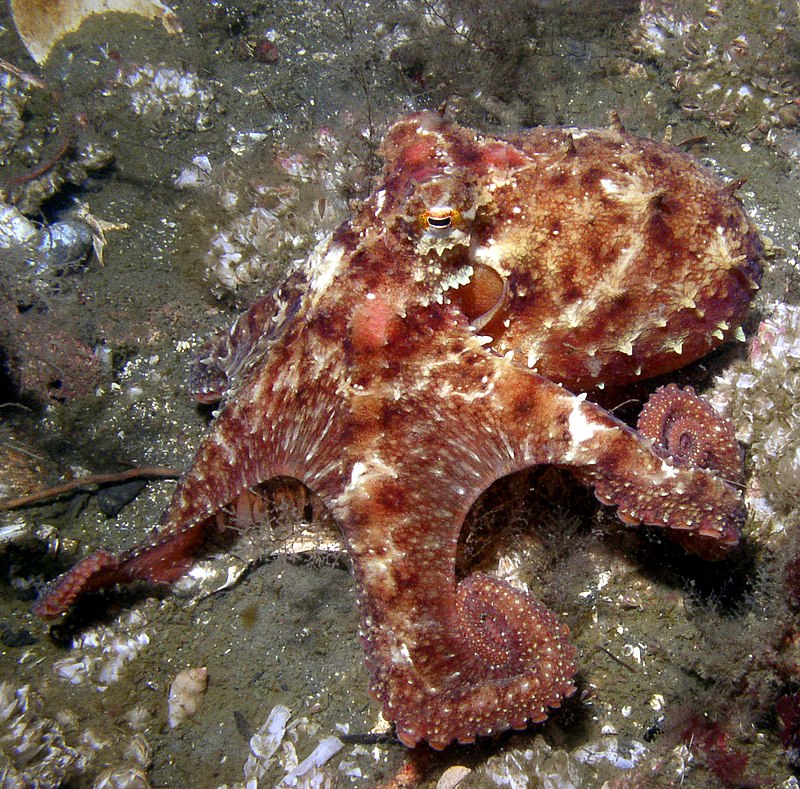 In an essay titled "Across the Evolutionary Divide: The story of Gaia," Sivitilli wrote of encountering "a large, camouflaged, breathing mass" 45 feet down in the water off San Juan County Park. This was a giant Octopus he and colleagues named and brought into the lab for study.

And as the days and nights passed in the darkened lab, the human and the octopus regarded each other with mutual interest and curiosity.

"Two cousins we are, meeting across an evolutionary divide of over 500 million years," he wrote. He said he found it "a humbling experience."

The astrobiological connection is perhaps already clear, if a bit distant. Sivitilli said studying cephalopods and other alternative forms of intelligence here on Earth might provide perspective to help us better identify and understand life — intelligent or not — if we ever run across it in the cosmos.

"Maybe we can slightly model what the origin of life would look like somewhere else," he said. "Because they are probably not going to look like us, when we go looking."

Humankind will not set foot on habitable exoplanets light-years away in the foreseeable future — so it takes a certain leap of faith to study Earthbound creatures as a proxy for extraterrestrial life. Sivitilli knows this.

"Yes, but I feel like that is a lot of what astrobiology is doing," he said. "They are looking at extremophiles and saying, 'Maybe this is what a microbe might look like — out there.'"

In the meantime, he said, such study could have value closer to home as well.

"Maybe I am just interested in cognition in general — alternate forms of cognition, computation, communication. Because I feel like this goes beyond extraterrestrial intelligence — maybe this is saying something about AI."

Sivitilli and Gire will discuss their work on June 26 as part of the weeklong conference, at the Bellevue Hyatt Regency Hotel.