Water Formation on Our Moon Demonstrated

For the first time, a cross-disciplinary study has shown chemical, physical, and material evidence for water formation on the Moon.
Two teams from the University of Hawaii at Manoa collaborated on the project: physical chemists at the  UH Manoa Department of Chemistry's W.M. Keck Research Laboratory in Astrochemistry and planetary scientists at the Hawaii Institute of Geophysics and Planetology (HIGP).

Image shows the pits and lids on the irradiated sample. 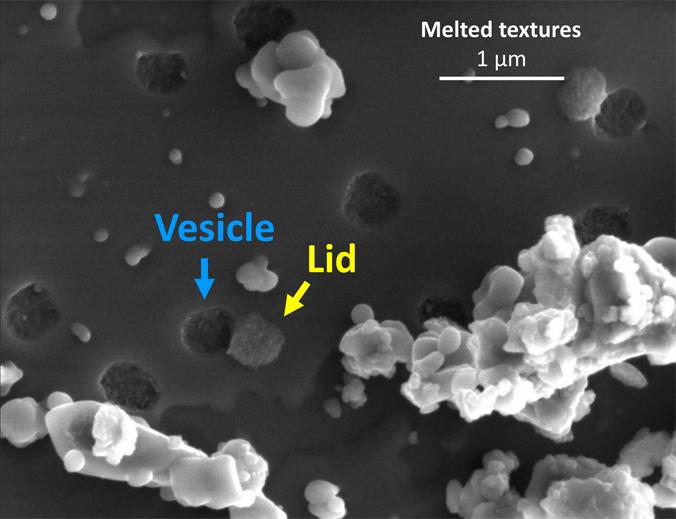 Credit: University of Hawaii at Manoa

Although recent discoveries by orbiting spacecraft such as the Lunar Prospector and the hard lander Lunar Crater Observation and Sensing Satellite suggest the existence of water ice at the poles the Moon, the origin of this water has remained uncertain. Lunar water represents one of the key requirements for permanent colonization of the Moon as a feedstock for fuel and energy generation (hydrogen, oxygen) and also as "drinking water."

The breakthrough research is outlined in "Untangling the formation and liberation of water in the lunar regolith," lead-authored by UH Manoa postdoctoral fellow Cheng Zhu and colleagues in the Proceedings of the National Academy of Sciences.

Chemistry Professor Ralf I. Kaiser and HIGP's Jeffrey Gillis-Davis designed the experiments to test the synergy between hydrogen protons from solar wind, lunar minerals, and micrometeorite impacts. Zhu irradiated samples of olivine, a dry mineral that serves as a surrogate of lunar material, with deuterium ions as a proxy for solar wind protons.

Deuterium irradiated only "experiments did not reveal any trace of water formation, even after increasing the temperature to lunar mid-latitude daytime temperatures," Zhu explained. "But when we warmed the sample, we detected molecular deuterium, suggesting that deuterium - or hydrogen - implanted from the solar wind can be stored in the lunar rock."

Kaiser added, "Therefore, another high-energy source might be necessary to trigger water formation within the Moon's minerals followed by its release as a gas that can be detected."

The second set of deuterium irradiation experiments was followed by laser heating to simulate the thermal effects of micrometeorite impacts. A burst of ions with mass-to-charge ratios matching that of singly ionized heavy water was observed in the gas phase during the laser pulses. "Water continued to be produced during laser pulses after the temperature was increased, suggesting that the olivine was storing precursors to heavy water that were released by laser heating," said Zhu.

To image these processes and interpret the broader impact on the Moon and other bodies, HIGP's Hope Ishii and John Bradley used focused ion beam-scanning electron microscopy and transmission electron microscopy in the Advanced Electron Microscopy Center. They observed sub-micrometer-sized surface pits, some partially covered by lids, suggesting that water vapor builds up under the surface in vesicles until they burst, releasing water from lunar silicates upon micrometeorite impact.

"Overall, this study advances our understanding on the origin of water as detected on the Moon and other airless bodies in our Solar System such as Mercury and asteroids and provides, for the first time, a scientifically sound and proven mechanism of water formation," HIGP's Jeffrey Gillis-Davis concluded.


Contacts and sources:
Ralf I. Kaiser
University of Hawaii Manoa