The Moon Is Cooling, Shrinking and Quaking

The Moon is shrinking and quaking.  It is still tectonically active.
In 2010, an analysis of imagery from NASA’s Lunar Reconnaissance Orbiter (LRO) found that the moon shriveled like a raisin as its interior cooled, leaving behind thousands of cliffs called thrust faults on the moon’s surface. Now a new analysis suggests that the moon may still be shrinking and actively producing moonquakes along these thrust faults.

This prominent thrust fault is one of thousands discovered on the moon by NASA's Lunar Reconnaissance Orbiter (LRO). These faults resemble small stair-shaped cliffs, or scarps, when seen from the lunar surface. The scarps form when one section of the moon's crust (left-pointing arrows) is pushed up over an adjacent section (right-pointing arrows) as the moon's interior cools and shrinks. New research suggests that these faults may still be active today. 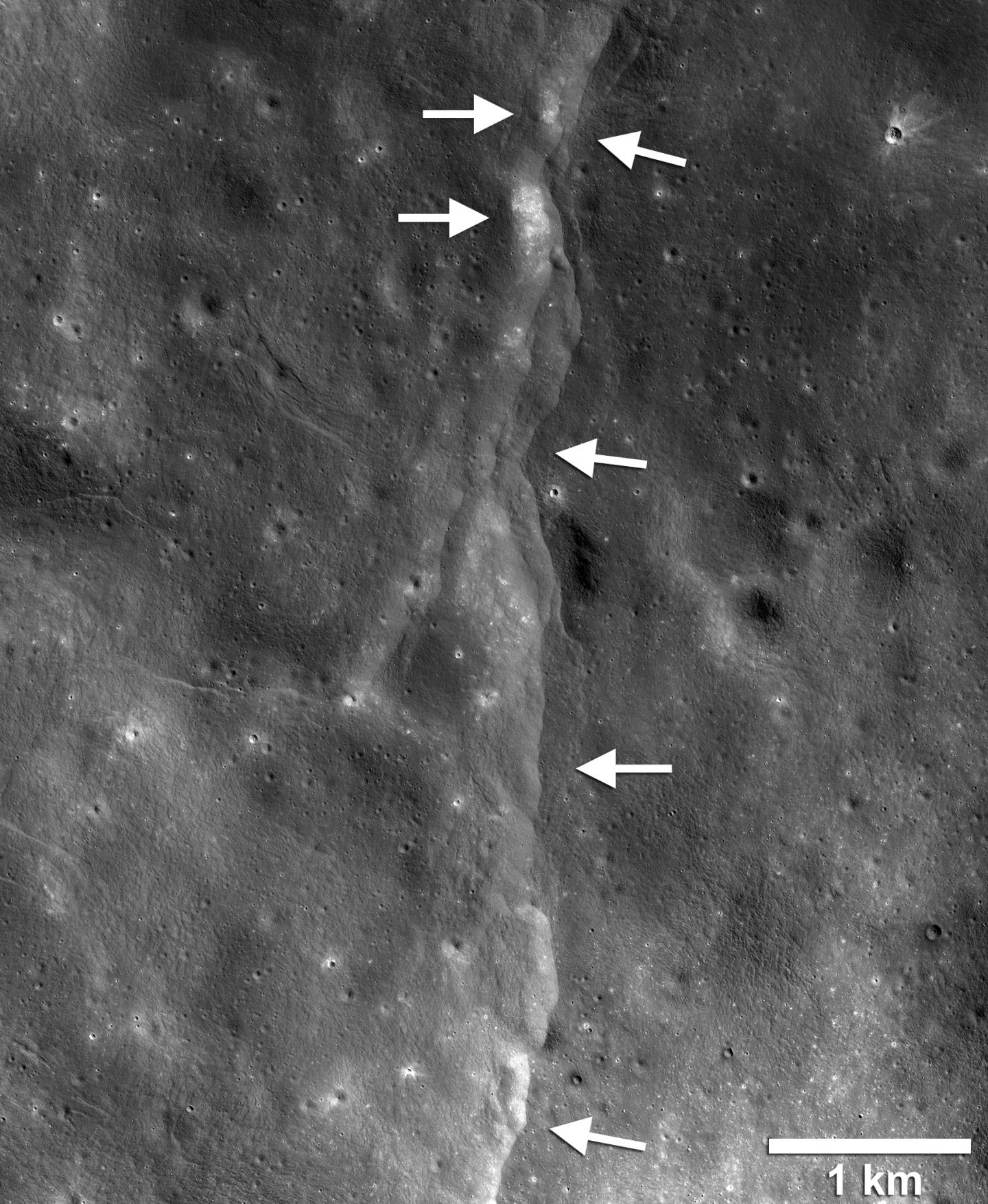 
A team of researchers including Nicholas Schmerr, an assistant professor of geology at the University of Maryland, designed a new algorithm to re-analyze seismic data from instruments [seismometers] placed by NASA’s Apollo missions in the 1960s and ’70s. Their analysis provided more accurate epicenter location data for 28 moonquakes recorded from 1969 to 1977.

The team then superimposed this location data onto LRO imagery of the thrust faults. Based on the quakes’ proximity to the thrust faults, the researchers found that at least eight of the quakes likely resulted from true tectonic activity—the movement of crustal plates—along the thrust faults, rather than from asteroid impacts or rumblings deep within the moon’s interior.

Although the Apollo instruments recorded their last quake shortly before the instruments were retired in 1977, the researchers suggest that the moon is likely still experiencing quakes to this day. A paper describing the work, co-authored by Schmerr, was published in the journal Nature Geoscience on May 13, 2019.

“We found that a number of the quakes recorded in the Apollo data happened very close to the faults seen in the LRO imagery,” Schmerr said, noting that the LRO imagery also shows physical evidence of geologically recent fault movement, such as landslides and tumbled boulders. “It’s quite likely that the faults are still active today. You don’t often get to see active tectonics anywhere but Earth, so it’s very exciting to think these faults may still be producing moonquakes.”

During the Apollo missions astronauts placed a number of different instruments on the moon, including five seismometers on the moon’s surface during the Apollo 11, 12, 14, 15 and 16 missions. The Apollo 11 seismometer operated only for three weeks, but the four remaining instruments recorded 28 shallow moonquakes—the type produced by tectonic faults—from 1969 to 1977. On Earth, the quakes would have ranged in magnitude from about 2 to 5.

Using the revised location estimates from their new algorithm, the researchers found that the epicenters of eight of those 28 shallow quakes were within 19 miles of faults visible in the LRO images. This was close enough for the team to conclude that the faults likely caused the quakes. Schmerr led the effort to produce “shake maps” derived from models that predict where the strongest shaking should occur, given the size of the thrust faults.

The researchers also found that six of the eight quakes happened when the moon was at or near its apogee, the point in the moon’s orbit when it is farthest from Earth. This is where additional tidal stress from Earth’s gravity causes a peak in the total stress on the moon’s crust, making slippage along the thrust faults more likely.

“We think it’s very likely that these eight quakes were produced by faults slipping as stress built up when the lunar crust was compressed by global contraction and tidal forces, indicating that the Apollo seismometers recorded the shrinking moon and the moon is still tectonically active,” said Thomas Watters, lead author of the research paper and senior scientist in the Center for Earth and Planetary Studies at the Smithsonian Institution in Washington.

Much as a grape wrinkles as it dries to become a raisin, the moon also wrinkles as its interior cools and shrinks. Unlike the flexible skin on a grape, however, the moon’s crust is brittle, causing it to break as the interior shrinks. This breakage results in thrust faults, where one section of crust is pushed up over an adjacent section. These faults resemble small stair-shaped cliffs, or scarps, when seen from the lunar surface; each is roughly tens of yards high and a few miles long.

The LRO has imaged more than 3,500 fault scarps on the moon since it began operation in 2009. Some of these images show landslides or boulders at the bottom of relatively bright patches on the slopes of fault scarps or nearby terrain. Because weathering gradually darkens material on the lunar surface, brighter areas indicate regions that are freshly exposed by an event such as a moonquake.

Other LRO fault images show fresh tracks from boulder falls, suggesting that quakes sent these boulders rolling down their cliff slopes. Such tracks would be erased relatively quickly, in terms of geologic time, by the constant rain of micrometeoroid impacts on the moon. With nearly a decade of LRO imagery already available and more on the way in the coming years, the team would like to compare pictures of specific fault regions from different times to look for fresh evidence of recent moonquakes.

“For me, these findings emphasize that we need to go back to the moon,” Schmerr said. “We learned a lot from the Apollo missions, but they really only scratched the surface. With a larger network of modern seismometers, we could make huge strides in our understanding of the moon’s geology. This provides some very promising low-hanging fruit for science on a future mission to the moon.”

This release is adapted from text provided by NASA’s Goddard Space Flight Center.

This work was supported by NASA’s Lunar Reconnaissance Orbiter Project and the Natural Sciences and Engineering Research Council of Canada. The content of this article does not necessarily reflect the views of these organizations.