A strange Martian mineral deposit, imaged from orbit, was likely made by ashfall from ancient volcanic explosions, according to Brown University researchers.  The site is expected to be visited by NASA’s next Mars rover. 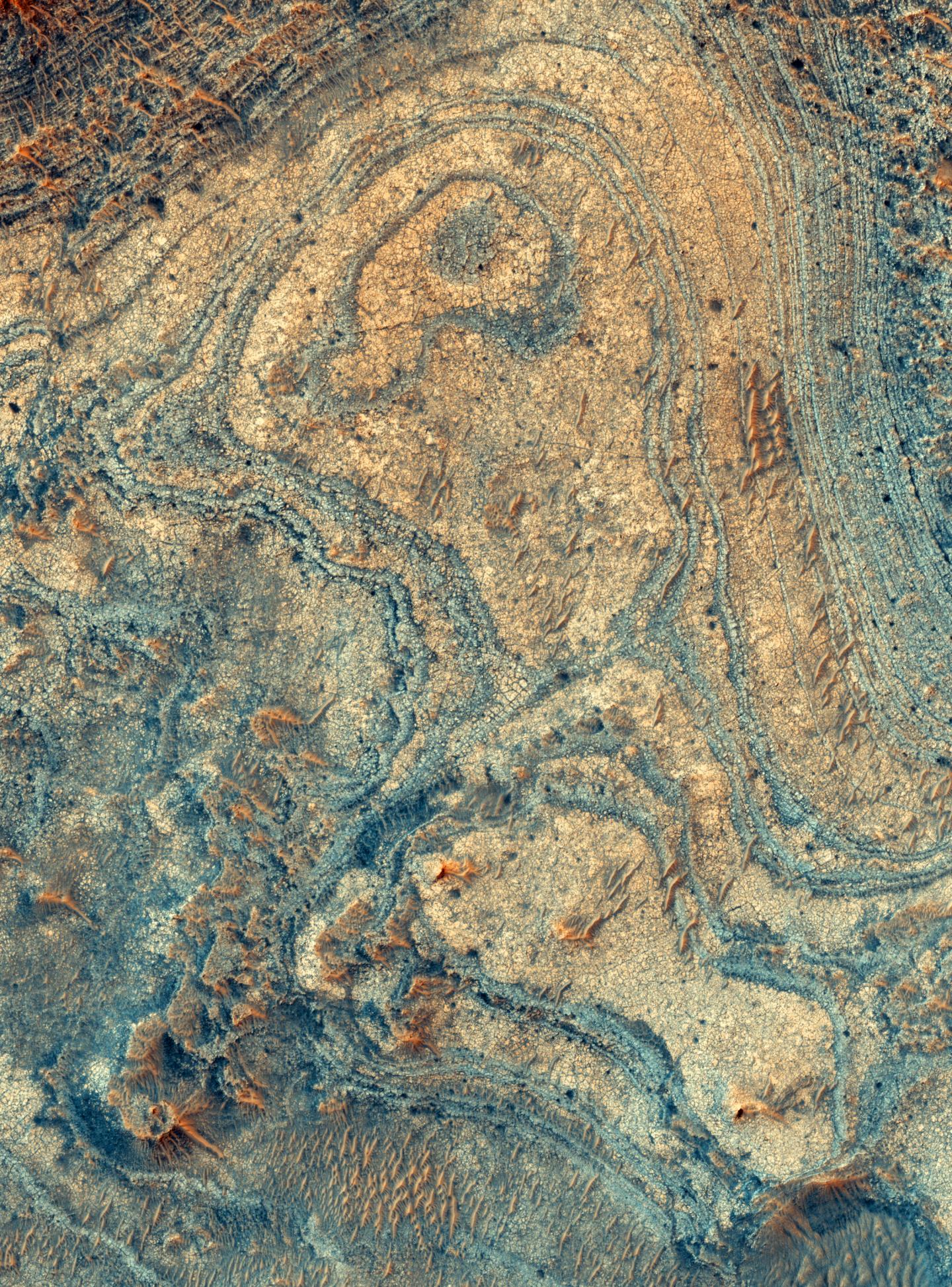 Ashfall from ancient volcanic explosions is the likely source of a strange mineral deposit near the landing site for NASA’s next Mars rover, a new study finds. The research, published in the journal Geology, could help scientists assemble a timeline of volcanic activity and environmental conditions on early Mars.

“This is one of the most tangible pieces of evidence yet for the idea that explosive volcanism was more common on early Mars,” said Christopher Kremer, a graduate student at Brown University who led the work. “Understanding how important explosive volcanism was on early Mars is ultimately important for understand the water budget in Martian magma, groundwater abundance and the thickness of the atmosphere.”

Volcanic explosions happen when gases like water vapor are dissolved in underground magma. When the pressure of that dissolved gas is more than the rock above can hold, it explodes, sending a fiery cloud of ash and lava into the air. Scientists think that these kinds of eruptions should have happened very early in Martian history, when there was more water available to get mixed with magma. As the planet dried out, the volcanic explosions would have died down and given way to more effusive volcanism — a gentler oozing of lava onto the surface. There’s plenty of evidence of an effusive phase to be found on the Martian surface, but evidence of the early explosive phase hasn’t been easy to spot with orbital instruments, Kremer says.

This new study looked at a deposit located in a region called Nili Fossae that’s long been of interest to scientists. The deposit is rich in the mineral olivine, which is common in planetary interiors. That suggests that the deposit is derived from deep underground, but it hasn’t been clear how the material got to the surface. Some researchers have suggested that it’s yet another example of an effusive lava flow. Others have suggested that the material was dredged up by a large asteroid impact — the impact that formed the giant Isidis Basin in which the deposit sits.

The Mars 2020 rover is headed for Jezero crater. In addition to a stunning river delta, Jezero also has exposures of the potential ashfall deposit that was the focus of this study. The rover could confirm these new findings, which will be one of the rover's "top 10 discoveries," says Brown professor Jack Mustard.

For this study, Kremer and colleagues from Brown used high-resolution images from NASA’s Mars Reconnaissance Orbiter to look at the geology of the deposit in fine detail. Kremer’s co-authors on the work are fellow Brown graduate student Mike Bramble, and Jack Mustard, a professor in Brown’s Department of Earth, Environmental and Planetary Sciences and Kremer’s advisor.

“This work departed methodologically from what other folks have done by looking at the physical shape of the terrains that are composed of this bedrock,” Kremer said. “What’s the geometry, the thickness and orientation of the layers that make it up. We found that the explosive volcanism and ashfall explanation ticks all the right boxes, while all of the alternative ideas for what this deposit might be disagree in several important respects with what we observe from orbit.”

The work showed the deposit extends across the surface evenly in long continuous layers that drape evenly across hills, valleys, craters and other features. That even distribution, Kremer says, is much more consistent with ashfall than lava flow. A lava flow would be expected to pool in low-lying areas and leave thin or non-existent traces in highlands.

And the stratigraphic relationships in the area rule out an origin associated with the Isidis impact, the researchers say. They showed that the deposit sits on top of features that are known to have come after the Isidis event, suggesting that the deposit itself came after as well.

All told, the researchers say, these orbital data strongly lean toward an ashfall origin. But the team won’t have to rely only on orbital data for long. NASA’s Mars2020 rover is scheduled to land in Jezero Crater, which sits within the olivine deposit. And there are exposures of the deposit within the crater. The olivine-rich unit will almost certainly be one of the rover’s exploration targets, and it might have the final say on what this deposit is.

“What’s exciting is that we’ll see very soon if I’m right or wrong,” Kremer said. “So that’s a little nerve wracking, but if it’s not an ashfall, it’s probably going to be something much stranger. That’s just as fun if not more so.”

If it does turn out to be ashfall, Kremer says, it validates the methodology used in this study as a means of looking at potential ashfall deposits elsewhere on Mars.

But whatever the rover finds will be important in understanding the evolution of the Red Planet.

“One of Mars 2020’s top 10 discoveries is going to be figuring out what this olivine-bearing unit is,” said Mustard, Kremer’s advisor. “That’s something people will be writing and talking about for a long time.”