Bermuda has a unique volcanic past. About 30 million years ago, a disturbance in the mantle’s transition zone supplied the magma to form the now-dormant volcanic foundation on which the island sits. 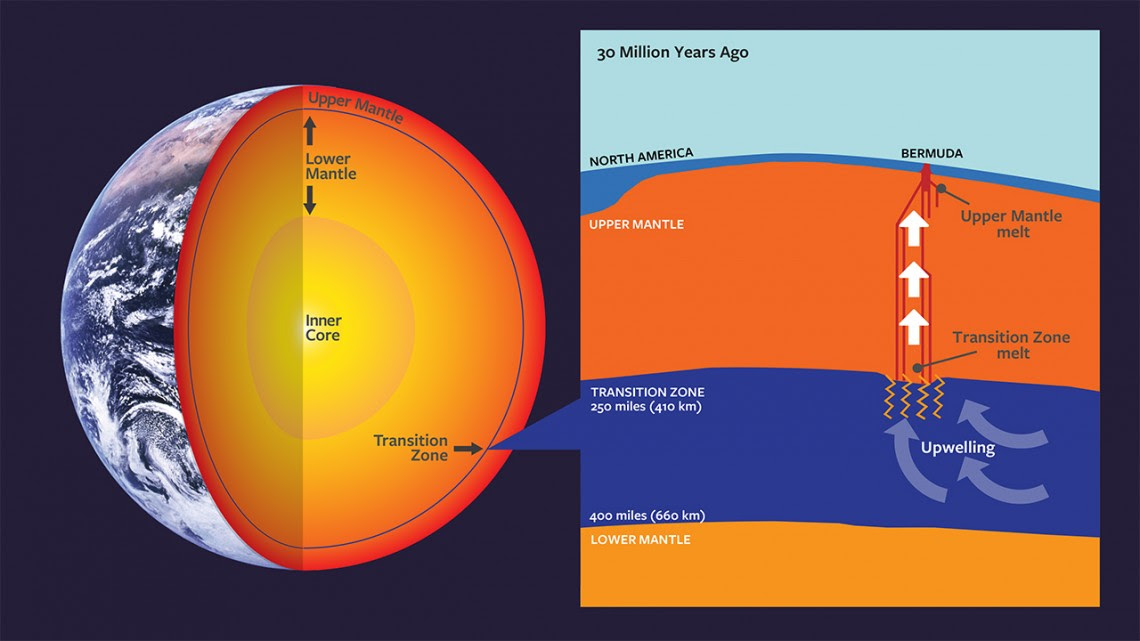 Far below Bermuda’s pink sand beaches and turquoise tides, Cornell geoscientists have discovered the first direct evidence that material from deep within Earth’s mantle transition zone – a layer rich in water, crystals and melted rock – can percolate to the surface to form volcanoes.

Scientists have long known that volcanoes form when tectonic plates (traveling on top of the Earth’s mantle) converge, or as the result of mantle plumes that rise from the core-mantle boundary to make hotspots at Earth’s crust. But obtaining evidence that material emanating from the mantle’s transition zone – between 250 to 400 miles beneath our planet’s crust – can cause volcanoes to form is new to geologists.

“We found a new way to make volcanoes. This is the first time we found a clear indication from the transition zone deep in the Earth’s mantle that volcanoes can form this way,” said senior author Esteban Gazel, Cornell associate professor in the Department of Earth and Atmospheric Sciences. The research published in Nature on May 15.

In a cross-polarized microscopic slice of a core sample, the blue and yellow crystal is titanium-augite, surrounded by a ground mass of minerals, which include feldspars, phlogopite, spinel, perovskite and apatite. This assemblage suggests that the mantle source – rich in water – produced this lava. 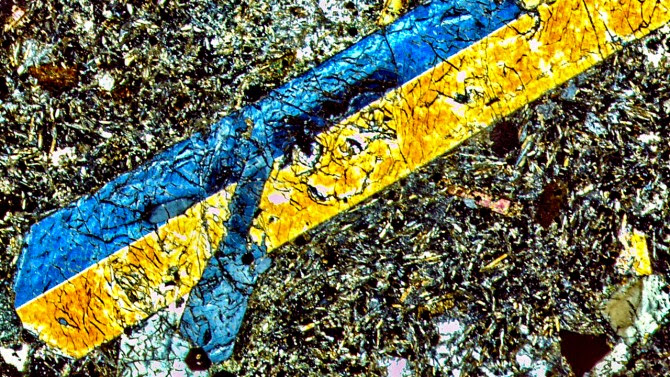 “We were expecting our data to show the volcano was a mantle plume formation – an upwelling from the deeper mantle – just like it is in Hawaii,” Gazel said. But 30 million years ago, a disturbance in the transition zone caused an upwelling of magma material to rise to the surface, form a now-dormant volcano under the Atlantic Ocean and then form Bermuda.Using a 2,600-foot core sample – drilled in 1972, housed at Dalhousie University, Nova Scotia – co-uthor Sarah Mazza of the University of Münster, Germany, assessed the cross-section for signature isotopes, trace elements, evidence of water content and other volatile material. The assessment provided a geologic, volcanic history of Bermuda.

“I first suspected that Bermuda’s volcanic past was special as I sampled the core and noticed the diverse textures and mineralogy preserved in the different lava flows,” Mazza said. “We quickly confirmed extreme enrichments in trace element compositions. It was exciting going over our first results … the mysteries of Bermuda started to unfold.”

The geoscientists developed numerical models with Robert Moucha, associate professor of Earth sciences at Syracuse University, to discover a disturbance in the transition zone that likely forced material from this deep mantle layer to melt and percolate to the surface.

Despite more than 50 years of isotopic measurements in oceanic lavas, the peculiar and extreme isotopes measured in the Bermuda lava core had not been observed before. Yet, these extreme isotopic compositions allowed the scientists to identify the unique source of the lava.

“If we start to look more carefully, I believe we’re going to find these geochemical signatures in more places,” said co-author Michael Bizimis, associate professor at the University of South Carolina.

Gazel explained that this research provides a new connection between the transition zone layer and volcanoes on the surface of Earth. “With this work we can demonstrate that the Earth’s transition zone is an extreme chemical reservoir,” he said. “We are now just now beginning to recognize its importance in terms of global geodynamics and even volcanism.”

Said Gazel: “Our next step is to examine more locations to determine the difference between geological processes that can result in intraplate volcanoes and determine the role of the mantle’s transition zone in the evolution of our planet.”

Gazel is a fellow at Cornell’s Atkinson Center for a Sustainable Future and a fellow at Cornell’s Carl Sagan Institute. In addition to Gazel, Mazza, Bizimis and Moucha, co-authors of “Sampling the Volatile-Rich Transition Zone Beneath Bermuda,” are Paul Béguelin, University of South Carolina; Elizabeth A. Johnson, James Madison University; Ryan J. McAleer, United States Geological Survey; and Alexander V. Sobolev, the Russian Academy of Sciences.

The National Science Foundation provided funding for this research.