These fish can see color even miles deep in the ocean.

The deep sea is home to fish species that can detect various wavelengths of light in near-total darkness. Unlike other vertebrates, they have several genes for the light-sensitive photopigment rhodopsin, which likely enables these fish to detect bioluminescent signals from light-emitting organs. The findings were published in the journal Science by an international team of researchers led by evolutionary biologists from the University of Basel.

The lanternfish has bioluminescent organs and an increased number of rhodopsin genes. 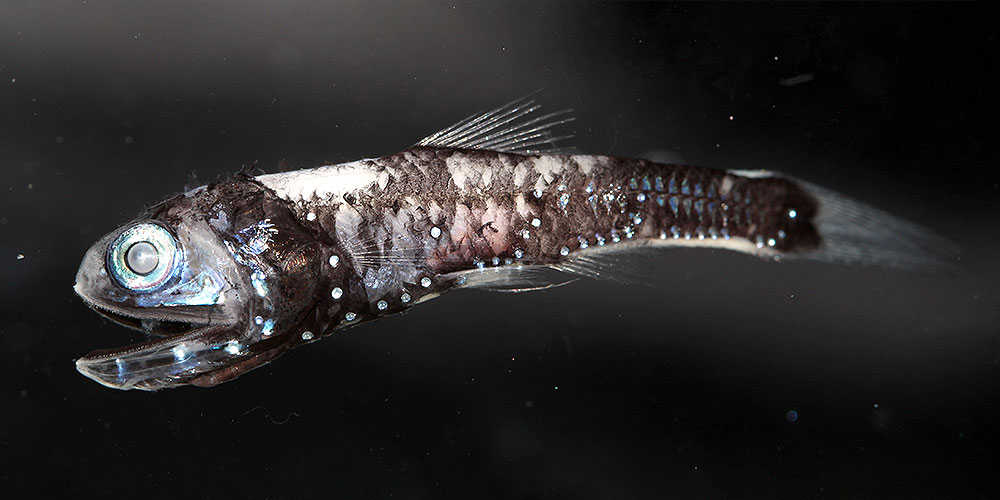 
Color vision in vertebrates is usually achieved through the interaction of various photopigments in the cone cells found in the retina. Each of these photopigments reacts to a certain wavelength of light. In humans, for example, these wavelengths are the red, green and blue range of the light spectrum. Color vision is only possible in daylight, however. In darkness, vertebrates detect the few available light particles with their light-sensitive rod cells, which contain only a single type of the photopigment rhodopsin – explaining why nearly all vertebrates are color-blind at night.
A genetic record for the silver spinyfin

An international team of researchers lead by Professor Walter Salzburger from the University of Basel recently analyzed more than 100 fish genomes, including those of fish living in deep-sea habitats. The zoologists discovered that certain deep-sea fish have expanded their repertoire of rhodopsin genes. In the case of the silver spinyfin (Diretmus argenteus), they found no less than 38 copies of the rhodopsin gene, in addition to two other opsins of a different type. “This makes the darkness-dwelling silver spinyfin the vertebrate with the most photopigment genes by far,” explains Salzburger.

The deep-sea fish’s many different rhodopsin gene copies have each adapted to detect a certain wavelength of light, the researchers further reported. They demonstrated this through computer simulations and functional experiments on rhodopsin proteins regenerated in the lab. The genes cover exactly the wavelength range of light “produced” by light-emitting organs of deep-sea organisms. This is known as bioluminescence, which is the ability of an organism to produce light on its own or with the help of other organisms. For example, anglerfish attract prey with their bioluminescent organs.

Detecting signals in the dark

The deep sea is the largest habitat on Earth and yet one of the least explored due to its inaccessibility. Many organisms have adapted to life in the near-total darkness of this inhospitable environment. For example, many fish have developed highly sensitive telescope eyes that allow them to detect the tiny amount of residual light that makes it to the depths of the ocean.

In vertebrates, 27 key spectral tuning sites have been identified in the protein for rhodopsin. These sites directly affect which wavelengths are detected. The researchers discovered that in the various gene copies of the deep-sea silver spinyfin, 24 of these positions exhibited mutations.

“It appears that deep-sea fish have developed this multiple rhodopsin-based vision several times independently of each other, and that this is specifically used to detect bioluminescent signals,” says Salzburger. He adds that this may give deep-sea fish an evolutionary advantage by allowing them to much better see potential prey or predators.

“In any case, our findings help redefine the current paradigm of vertebrate vision in terms of the role of rod photoreceptors,” the zoologists write. This presents yet another instance in which analyzing whole genomes led to new biological discoveries.