New 'Secrets' from Far Side of the Moon Discovered

A lunar lander named for the Chinese goddess of the moon may have lessened the mystery of the far side of the moon.

The fourth probe of Chang'E (CE-4) was the first mission to land on the far side of the moon, and it has collected new evidence from the largest crater in the solar system, clarifying how the moon may have evolved.

This is an image captured by Chang'E 4 showed the landscape near the landing site.

A theory emerged in the 1970s that in the moon's infancy, an ocean made of magma covered its surface. As the molten ocean began to calm and cool, lighter minerals floated to the top, while heavier components sank. The top crusted over in a sheet of mare basalt, encasing a mantle of dense minerals, such as olivine and pyroxene.

As asteroids and space junk crashed into the surface of the moon, they cracked through the crust and kicked up pieces of the lunar mantel.

"Understanding the composition of the lunar mantel is critical for testing whether a magma ocean ever existed, as postulated," said corresponding author LI Chunlai, a professor of the National Astronomical Observatories of Chinese Academy of Sciences (NAOC). "It also helps advance our understanding of the thermal and magmatic evolution of the moon."

The evolution of the moon may provide a window into the evolution of Earth and other terrestrial planets, according to LI, because its surface is relatively untouched compared to, say, the early planetary surface of Earth.

LI and his team landed CE-4 in the moon's South Pole-Aitken (SPA) basin, which stretches about 2,500 kilometers-about half the width of China. CE-4 collected spectral data samples from the flat stretches of the basin, as well as from other, smaller but deeper impact craters within the basin.

The researchers expected to find a wealth of excavated mantle material on the flat floor of the SPA basin, since the originating impact would have penetrated well into and past the lunar crust. Instead, they found mere traces of olivine, the primary component of the Earth's upper mantle.

"The absence of abundant olivine in the SPA interior remains a conundrum," LI said. "Could the predictions of an olivine-rich lunar mantle be incorrect?"

Not quite. As it turns out, more olivine appeared in the samples from deeper impacts. One theory, according to LI, is that the mantle consists of equal parts olivine and pyroxene, rather than being dominated by one over the other.

This is image captured by Chang'E 4 showed the landscape near the landing site. 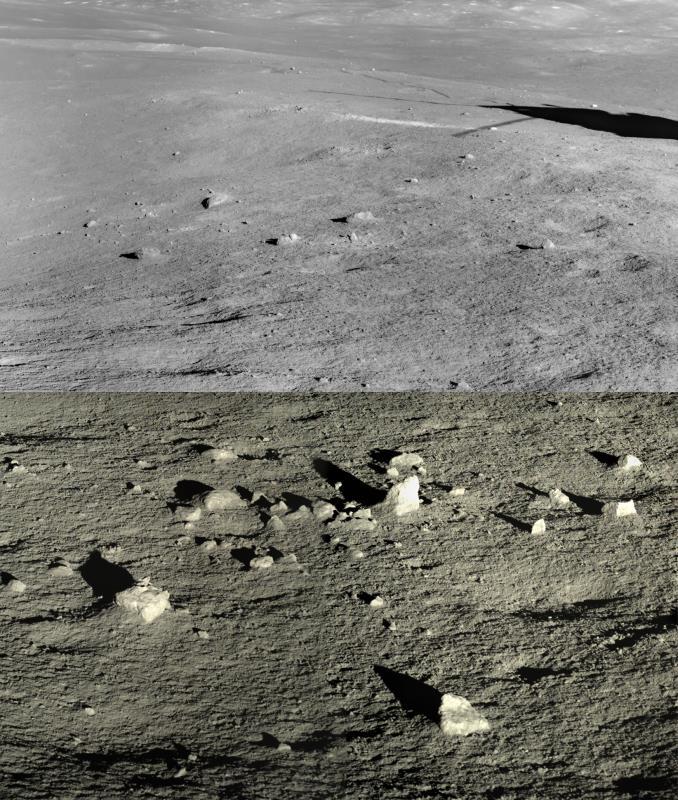 CE-4 will need to explore more to better understand the geology of its landing site, as well as collect much more spectral data to validate its initial findings and to fully understand the composition of the lunar mantle.

This work was supported by the Chang'E-4 mission of the Chinese Lunar Exploration Program.