For the first time beyond the lab, an extraordinary union between carbon monoxide and nitrogen ices
was observed by astronomers using the Gemini Observatory  to explore Neptune's largest moon. The discovery offers insights into how this volatile mixture can transport material across the moon's surface via geysers, trigger seasonal atmospheric changes, and provide a context for conditions on other distant, icy worlds.

Voyager 2 image of Triton showing the south polar region with dark streaks produced by geysers visible on the icy surface. 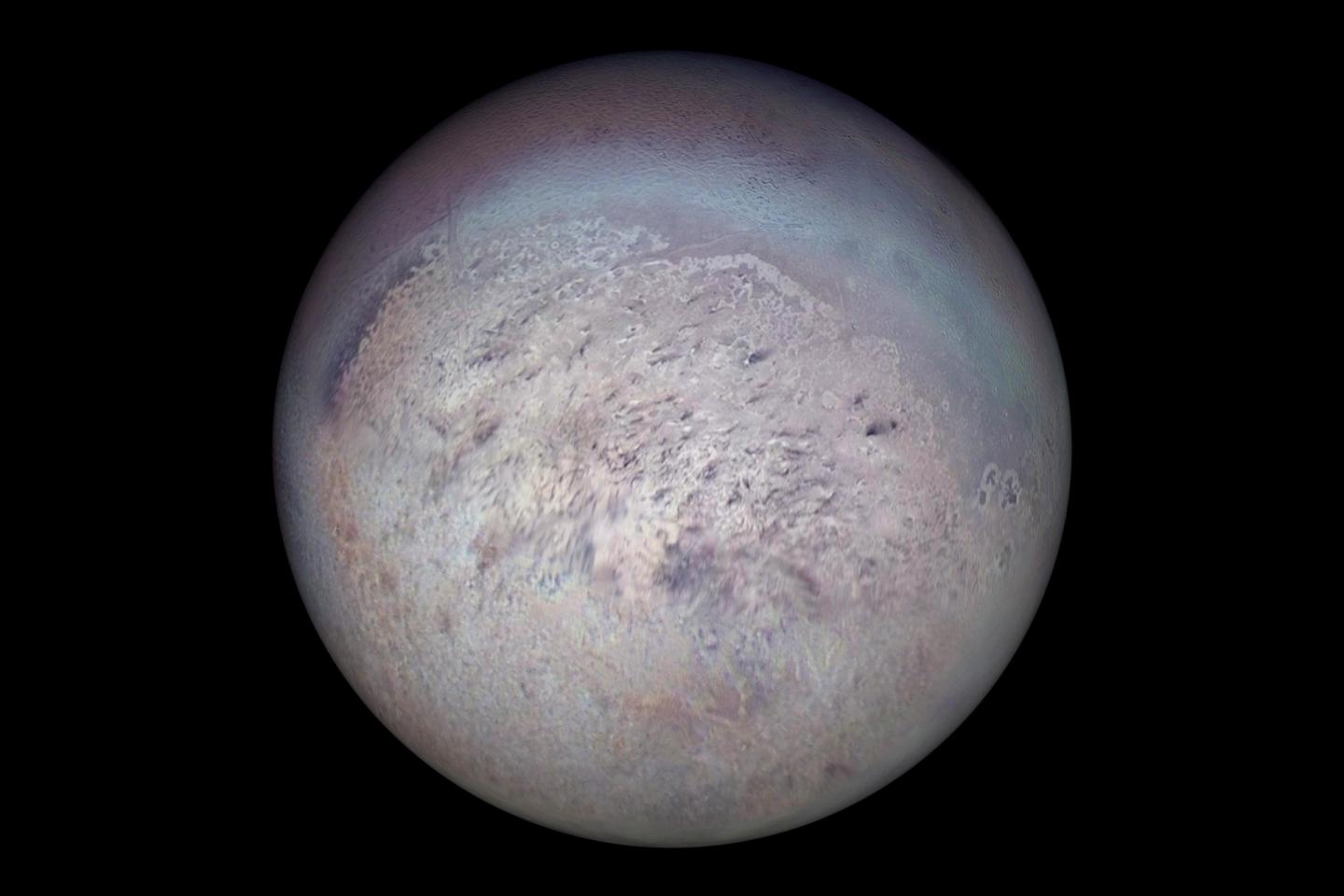 In the laboratory, an international team of scientists have pinpointed a very specific wavelength of infrared light absorbed when carbon monoxide and nitrogen molecules join together and vibrate in unison. Individually, carbon monoxide and nitrogen ices each absorb their own distinct wavelengths of infrared light, but the tandem vibration of an ice mixture absorbs at an additional, distinct wavelength identified in this study.

Using the 8-meter Gemini South Telescope in Chile, the team have recorded this same unique infrared signature on Triton. Key to the discovery was the high-resolution spectrograph called IGRINS (Immersion Grating Infrared Spectrometer) which was built as a collaboration between the University of Texas at Austin and the Korea Astronomy and Space Science Institute (KASI). Both the Gemini Observatory and IGRINS receive funding from the US National Science Foundation (NSF) and KASI.

"While the icy spectral fingerprint we uncovered was entirely reasonable, especially as this combination of ices can be created in the lab, pinpointing this specific wavelength of infrared light on another world is unprecedented," said Stephen C. Tegler of Northern Arizona University's Astrophysical Materials Laboratory who led the international study. The research results have been accepted for publication in the Astronomical Journal.

In the Earth's atmosphere carbon monoxide and nitrogen molecules exist as gases, not ices. In fact, molecular nitrogen is the dominant gas in the air we breath, and carbon monoxide is a rare contaminant that can be lethal.

On distant Triton, however, carbon monoxide and nitrogen freeze as solid ices. They can form their own independent ices, or can condense together in the icy mix detected in the Gemini data. This icy mix could be involved in Triton's iconic geysers first seen in Voyager 2 spacecraft images as dark, windblown streaks on the surface of the distant, icy moon.

The Voyager 2 spacecraft first captured Triton's geysers in action in the moon's south polar region back in 1989. Since then, theories have focused on an internal ocean as one possible source of erupted material. Or, the the geysers may erupt when the summertime Sun heats this thin layer of volatile ice on Triton's surface, potentially involving the mixed carbon monoxide and nitrogen ice revealed by the Gemini observation. That ice mixture could also migrate around the surface of Triton in response to seasonally varying patterns of sunlight.

This stunning photograph taken, with a fish-eye lens from inside the Gemini South dome, shows the telescope nested in its altazimuth mount, pointing just high enough so that its monstrous 8-meter primary mirror is visible. 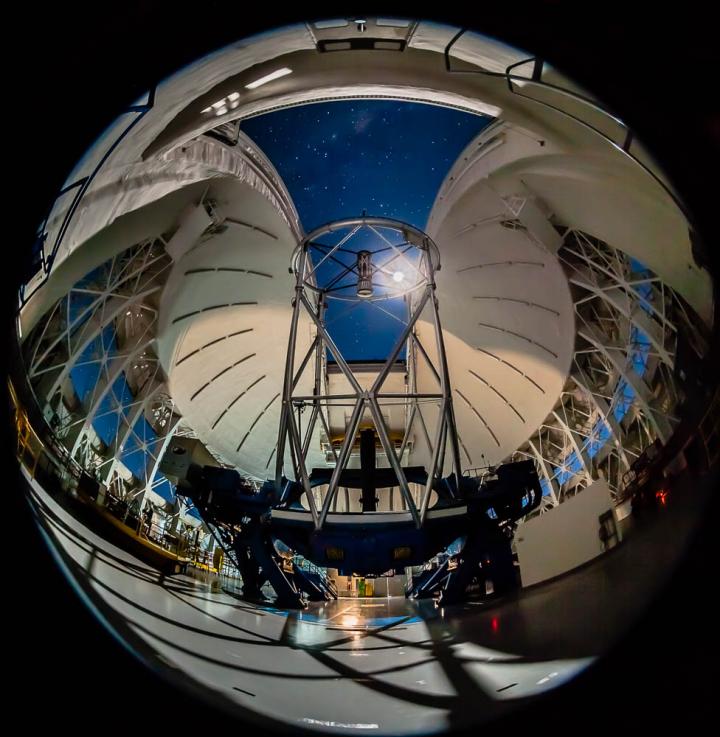 "Despite Triton's distance from the Sun and the cold temperatures, the weak sunlight is enough to drive strong seasonal changes on Triton's surface and atmosphere," adds Henry Roe, Deputy Director of Gemini and a member of the research team. "This work demonstrates the power of combining laboratory studies with telescope observations to understand complex planetary processes in alien environments so different from what we encounter every day here on Earth."

Seasons progress slowly on Triton, as Neptune takes 165-Earth years to orbit the Sun. A season on Triton lasts a little over 40 years; Triton passed its southern summer solstice mark in 2000, leaving about 20 more years to conduct further research before its autumn begins.

Looking ahead, the researchers expect that these findings will shed light on the composition of ices and seasonal variations in the atmosphere on other distant worlds beyond Neptune. Astronomers have suspected that the mixing of carbon monoxide and nitrogen ice exists not only on Triton, but also on Pluto, where the New Horizons spacecraft found the two ices coexisting. This Gemini finding is the first direct spectroscopic evidence of these ices mixing and absorbing this type of light on either world.

Triton orbits Neptune, the eighth planet from the Sun, some 2.7 billion miles from Earth -- at the cold outer fringe of our Solar System's major planet zone. It is the only large moon in the Solar System that orbits "backwards" or in the opposite direction to its planet's rotation. The peculiar motion suggests that Triton is a captured trans-Neptunian object from the Kuiper Belt -- a region of leftovers from the Solar System's early history, which is why it shares several features with the dwarf planet Pluto and Eris: size (roughly two-thirds that of our Moon), and surface temperatures that hover near absolute zero; so low that common compounds we know as gases on Earth freeze into ices.

Triton's atmosphere is also 70,000 times less dense than Earth's and is composed of nitrogen, methane, and carbon monoxide. Its surface appears to consist of two different terrains, one composed by the volatile ices and the second one formed by water and carbon dioxide ices.