Before the Neanderthals disappeared, about 30,000 years ago, the Chatelperronian culture was created, featured by the creation of knives and spear tips. Chatelperrionian was the transition from the Middle to the Upper Paleolithic, and coincided with the moment the Neanderthals were in contact with Homo sapiens sapiens, who were spreading around Europe from the Middle East. 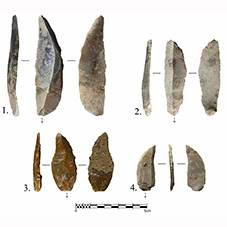 Credit: University of Barcelona / PLOS ONE

So far in the Iberian Peninsula, only remains from Chatelperronian cultures had been found in the Pyrenees and the Cantabrian coast. In fact, the Iberian area was considered to be a shelter for the Neanderthals, who lived there for thousands of years without any contact with the Homo sapiens sapiens, keeping the material traditions of the Middle Paleolithic.

However, experts from the Prehistoric Studies and Research Seminar (SERP) of the UB have found in Cova Foradada (Calafell, Spain) remains from about 40,000 and 41,000 years ago that are samples from Chatelperronian cultures –found in the southernmost area of Europe so far. In an article published in the journal PLOS ONE, researchers note the relevance of these findings and how the cave becomes now an “important geographical and chronological reference to understand the disappearance of Neanderthals and expansion of the modern humans”.

“The findings mean there was a significant expansion towards the south of Europe regarding the Chatelperronian, beyond the area researchers had established”, says the first author of the article and supervisor of the excavation, Juan Ignacio Morales, researcher from the program Juan de la Cierva, adjunct to SERP. The article in PLOS ONE notes the cave is near the Ebro Depression, which some researchers regarded as a barrier of the population and cultural flows during the first expansion of Homo sapiens sapiens in the Peninsula. It also explains there were no other remains from transition cultures like the Chatelperronian beyond the Ebro. In short, Morales concludes that with these findings “we can expand the area where the change from Middle Paleolithic to the Upper Paleolithic occurred 40,000 years ago and probably the interaction between both human species, the Neanderthals and the Homo sapiens sapiens”. Morales highlights that “Cova Foradada was probably one of the last sites where the direct contact took place, or at least mutual influence between Neanderthals and Homo sapiens sapiens”.

The remains of Cova Foradada include eight layers of flint -typical from the Chatelperronian, known as Chatelperronian stone tools, which can be used as projectile points and as knives to cut too. In the site, they found stone and horn tools belonging to Homo sapiens sapiens from 38,000 years ago, corresponding to the early Aurignacian, and from 31,000 years ago, from the Gravettian period. The remains of the site show that the last Nanderthals and the first Homo sapiens sapiens used the Cova Foradada as a place for hunt-related activities. They made short stays in the cave and repaired the tools, and those they left there were useless already.

The excavations in Cova Foradada started in 1997. At the moment, the supervision of the excavation is conducted by Juan Ignacio Morales and Artur Cebrià. The archaeological study of the site is included in the SERP project funded by the Department of Culture of Generalitat de Catalunya and the subsidized project by the Ministry of Science, Innovation and Universities, headed by the UB professor and director of SERP Josep Maria Fullola.


Contacts and sources:
University of Barcelona
PLOS ONE