A jawless parasitic fish could help lead the way to more effective treatments for multiple brain ailments, including cancer, trauma and stroke.

One major challenge in treating cancers and other disorders of the brain is ensuring that medicines reach their targets. A team of biomedical engineers and clinician-scientists at the University of Wisconsin–Madison and the University of Texas at Austin borrowed molecules from the immune system of the parasitic sea lamprey to deliver anti-cancer drugs directly to brain tumors.

Lampreys and humans have similar immune systems. But instead of producing antibodies to neutralize threats (that’s how vaccines help protect us against measles), they produce small defensive molecules. 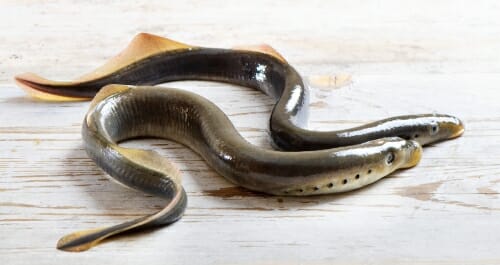 They published their results today (May 15, 2019) in the journal Science Advances.

Unlike most currently used medicines, which target specific features on or inside individual cells in our body’s organs and tissues, the lamprey-derived molecules take aim at a different target — the extracellular matrix, a tangled mesh of proteins and sugars that supports and surrounds all cells in the brain.

The researchers believe the molecules could be adapted and combined with a wide array of other therapies, offering hope to treat numerous brain ailments beyond tumors, such as multiple sclerosis, Alzheimer’s disease or even traumatic injuries.

“This set of targeting molecules appears somewhat agnostic to the disease,” says Eric Shusta, a professor of chemical and biological engineering at UW–Madison. “We believe it could be applied as a platform technology across multiple conditions.”

The technology takes advantage of the fact that many diseases disrupt one of the body’s natural defense mechanisms: the blood-brain barrier, which lines the blood vessels of the central nervous system and protects the brain from potential threats such as circulating toxins or pathogens.

Many drugs — including the lamprey-derived molecules — cannot reach targets in the brain when they are injected into the bloodstream, because the blood-brain barrier normally prevents large molecules from leaving the blood vessels in the brain.

Chemical and biological engineering professor Eric Shusta, right, and postdoctoral researcher Ben Umlauf at work in the lab, where they helped develop molecules from parasitic lamprey for use in treating disorders in the brain. 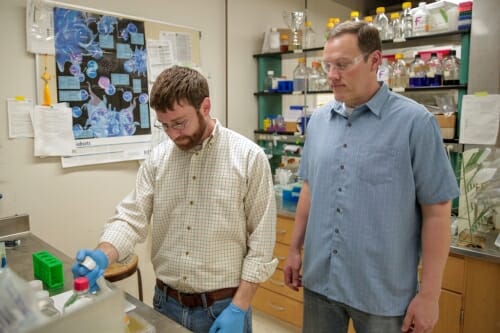 
Yet, in conditions such as brain cancer, stroke, trauma and multiple sclerosis, the barrier becomes leaky in and around the disease locations. A leaky barrier offers a unique point of entry. It will allow the matrix-targeting lamprey molecules to access the brain and deliver drugs precisely on target.

“Molecules like this normally couldn’t ferry cargo into the brain, but anywhere there’s a blood-brain barrier disruption, they can deliver drugs right to the site of pathology,” says Shusta.

Knowing that brain tumors often cause the barrier to leak, the researchers linked the lamprey-derived molecules to a Food and Drug Administration-approved chemotherapy called doxorubicin. The treatment prolonged survival in mouse models of glioblastoma, the incurable brain cancer that afflicted Senators John McCain and Ted Kennedy.

The matrix-targeting strategy means a wide variety of therapies could be linked to the lamprey-derived molecules. They could also be combined with techniques that temporarily open the blood brain barrier at specific brain sites. And it’s possible that drugs delivered to the matrix could accumulate to a much higher therapeutic dose than medicines aimed at the inside of cells.

“Similar to water soaking into a sponge, the lamprey molecules will potentially accumulate much more of the drug in the abundant matrix around cells compared to specific delivery to cells,” says collaborator John Kuo, a neurosurgeon-scientist and professor of neurosurgery in the Dell Medical School at the University of Texas at Austin.

Additionally, brain cells actively pump out many chemicals — a useful trick to protect against toxic compounds, but a major headache for achieving effective therapeutic doses for medicines.

Targeting the matrix that surrounds the cells sidesteps that pumping problem.

“This could be a way to hold therapies in place that don’t otherwise accumulate well in the brain so they can be more effective,” says Ben Umlauf, a postdoctoral scholar in Shusta’s group who isolated the lamprey-derived molecules.

Lampreys and humans have similar immune systems. But instead of producing antibodies to neutralize threats (that’s how vaccines help protect us against measles), they produce small crescent-shaped defensive molecules called VLRs. To obtain their drug-delivery molecules, the researchers “vaccinated” lampreys with components of the brain extracellular matrix and then hunted through many thousands of VLRs to find one that stuck specifically to the brain matrix.

Importantly, in the mouse studies, the lamprey-derived molecules circulated throughout the body without accumulating in healthy brain tissue or other organs. This targeted delivery is especially important in cancer treatments, since many therapies frequently cause debilitating adverse reactions due to indiscriminate effects on healthy cells.

In the future, the researchers plan to link the matrix-targeting molecules to additional anti-cancer drugs, such as immunotherapy agents that activate a patient’s own immune system to destroy tumors.

They also see promise in using the molecules as diagnostic tools to detect blood-brain barrier disruption by linking the matrix binders with probes for advanced imaging with PET scanners or MRI machines.

And because the molecules appear to be quite adaptable, the researchers speculate that many other medicines for the brain could become more effective if they were targeted to the matrix.

“I’m excited about trying this strategy in different disease model systems,” says Kuo. “There are several disease processes that disrupt the blood-brain barrier and we could conceive of delivering a variety of different therapies with these molecules.”

Other collaborators on the study include Paul Clark, Jason Lajoie, Julia Georgieva and Samantha Bremner at UW–Madison and Brantley Herrin at Emory University.