Is NASA Looking in the Wrong Places for Life on Mars

Scientists at the Swedish Museum of Natural History have begun compiling an atlas of fossils in volcanic rock, to guide where and what to look for in the search for Martian life.

In 2020, NASA and European-Russian missions will look for evidence of past life on Mars. But while volcanic, igneous rock predominates on the Red Planet, virtually the entire Earth fossil record comes from sedimentary rocks. 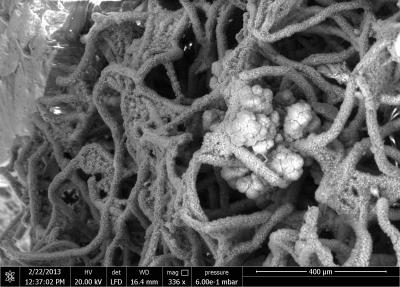 Addressing the problem in Frontiers in Earth Science, Swedish scientists have begun compiling evidence of fossilized microbes in underexplored igneous rock environments on Earth, to help guide where to search for a Martian fossil record - and what to look for.

"We propose a 'volcanic microfossil atlas' to help select target sites for missions seeking evidence of extraterrestrial life, such as the NASA Mars mission 2020 and ExoMars," says lead author Dr. Magnus Ivarsson. "The atlas could also help us recognize what Mars microfossils might look like, by identifying biosignatures associated with different types of fossilized microbes."

Ivarsson and colleagues study life buried in deep rock and deep time: fossilized remains of mysterious microbes, that have lived up to a kilometer below the deepest ocean floors for as long as 3.5 billion years.

"The majority of the microorganisms on Earth are believed to exist in the deep biosphere of the ocean and continental crust," reveals Ivarsson. "Yet we are just now beginning to explore - through deep drilling projects - this hidden biosphere."

This is a three-dimensional reconstruction made by synchrotron-based X-ray tomography (srxtm) of the same as in the image above. Fungal mycelium with microstromatolitic structures and remains of prokaryotic cell-like structures in between the fungal hyphae. 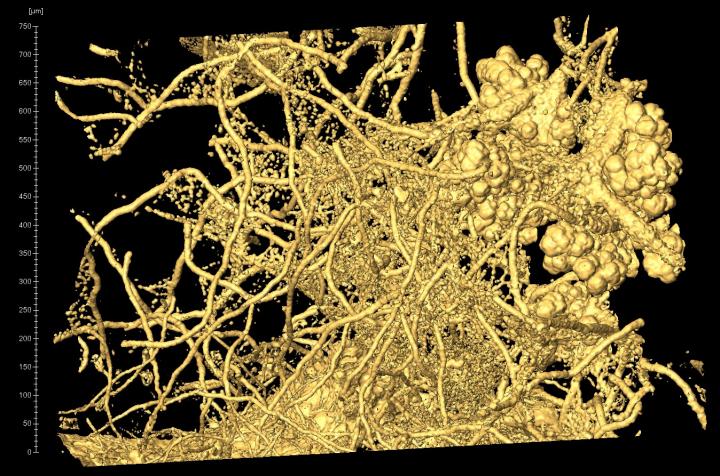 In a watery world that never sees sunlight, bacteria, fungi and other microbes have adapted to feed on the igneous rock that surrounds them - or even on each other. They spread through micro-fractures and cavities, forming complex and extended communities.

"Upon death, the microbial communities become fossilized on the walls of their rocky home. These microfossils can provide a history of microbial life in volcanic rock."

"Our aim is to be able to use the oceanic crust microfossil record as a model system to guide Martian exploration," Ivarsson explains. "Our review of existing knowledge is an important first step, but a more comprehensive understanding of the deep life is needed to show where and what to search for."

To achieve this, says Ivarsson, we need to collect more data on microfossil appearance and location - but also, on their chemical composition.

"These fossils often preserve immense morphological detail. For example, we can distinguish broad classes of fungi through the appearance of spores, fruiting bodies, mycelia and other growth states - or of bacteria, through the presence of cauliflower-like formations, generations of biofilms preserved as laminated sheets, and other characteristic community structures.

"But analysis of lipids and carbon isotopes in microfossils will make it possible to discriminate more precise groups based on their metabolism.

This is a three-dimensional reconstruction made by synchrotron-based X-ray tomography (srxtm) of a fossilized fungal mycelia and prokaryotic cell-like structures in between the hyphae forming a 'cob-web'. Part of the mycelium has chemically bored into a calcite crystal (seen in the lower part). 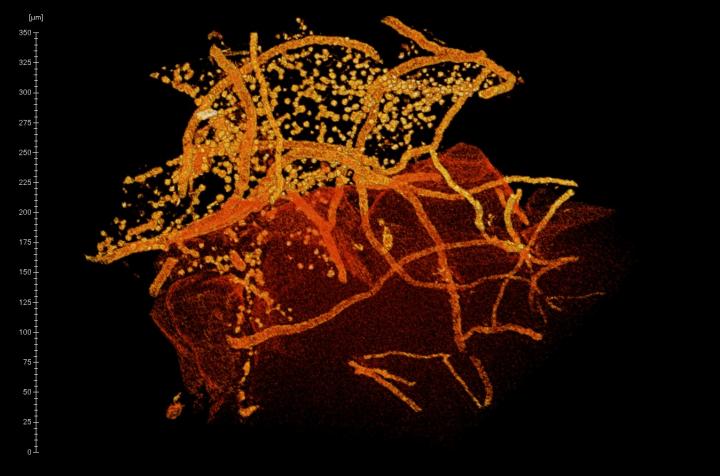 "Altogether this information will help to identify which types of microorganism are most likely to have been preserved on Mars, and which geochemical conditions most favour fossilization."

A fossil record on Mars

The microfossil atlas would therefore also help to determine which samples should be targeted for return to Earth, given the limited payload of the Mars missions.

"Both NASA's Mars 2020 and the ExoMars missions are capable of detecting larger fossilized structures from volcanic rocks, such as mm-sized mineralized fungal mycelia, or larger microstromatolites in open vesicles.

"ExoMars's 8 micrometer/pixel cameras have a greater chance of identifying small features and individual hyphae in situ on Mars. However, the NASA mission has the possibility of collecting samples for later investigation on Earth, and its 15 micrometer/px cameras may therefore be sufficient select samples with a high probability of containing biosignatures. These complimentary strategies increase the overall chance of detecting evidence of past life on Mars, if it exists," concludes Ivarsson.

Contacts and sources:
Matt Prior
Frontiers in Earth Science