Collisions of lead nuclei take place under extreme physical conditions. Their course can be described using a model which assumes that the transforming, extremely hot matter - the quark-gluon plasma - flows in the form of hundreds of streaks. Until now, the "fire streaks" seemed to be purely theoretical structures. However, the latest analysis of collisions of individual protons reinforces the hypothesis that they represent a real physical phenomenon.

"Fire streaks" were used to describe the ultrarelativistic collisions of lead nuclei. Researchers from the Institute of Nuclear Physics of the Polish Academy of Sciences in Cracow have now also found them in much simpler collisions taking place between individual protons. 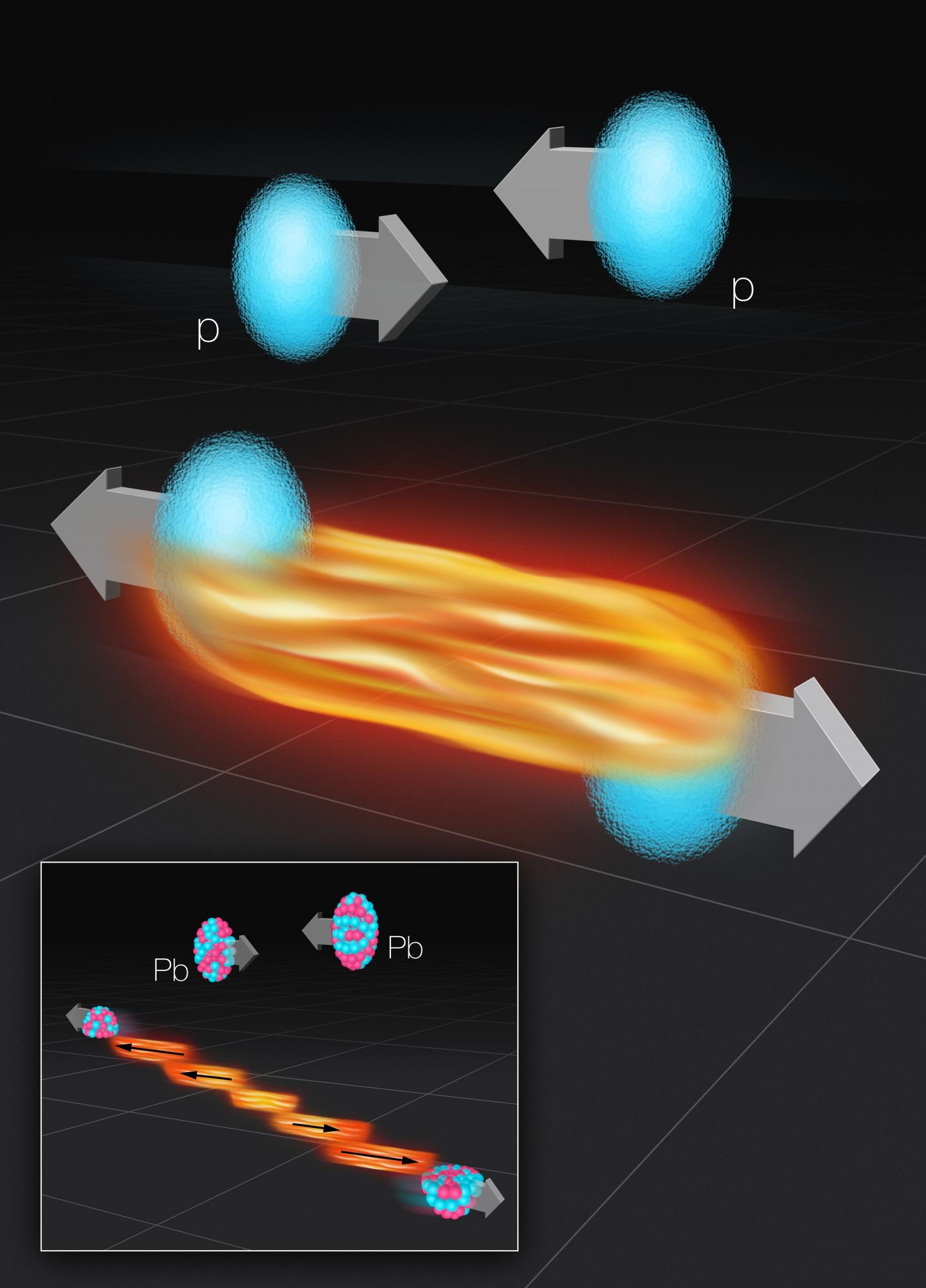 In 2017, physicists from the Institute of Nuclear Physics of the Polish Academy of Sciences (IFJ PAN) in Cracow presented a model of the phenomena occurring during collisions of lead nuclei at high energies which captured imagination. The model assumed that the exotic matter arising in the collisions, the quark-gluon plasma, moves away from the impact point in the form of numerous streaks stretching along the original direction of motion of the nuclei. These streaks move faster the further away they are from the collision axis. Now the researchers have applied the "fire streaks" model to much simpler proton-proton collisions. When they compared their predictions with the data collected in the experiments at CERN's European nuclear research centre, they were quite surprised.

Lead nuclei contain over two hundred protons and neutrons. When two such large objects collide with a sufficiently large energy, a liquid mixture of quarks and gluons (particles that under normal conditions clump quarks into protons and neutrons) arises. The quark-gluon plasma expands rapidly and simultaneously cools down. As a result, it exists so briefly and in such a small area of space (only hundreds of millionths of one billionth of a metre) that we cannot directly observe it. In addition, the interactions between the plasma particles are dominated by strong forces which are so complex that modern physics is simply not capable of describing them quantitatively. Traces of the quark-gluon plasma can be seen only indirectly, in particles coming from the collision site. Theory foresees that if the quark-gluon plasma is actually produced, detectors should register a clearly larger number of strange particles (that is, those that contain strange quarks).

"The proton-proton collisions in the CERN accelerators produce few strange particles. It is thus generally accepted that the quark-gluon plasma does not arise during these collisions. We took this fact into account in our model of fire streaks, and then we confronted its predictions with data from the NA49 experiment at the SPS accelerator. The compliance was strikingly good. So we can say that we have now 'seen' a fire streak in qualitatively different physical conditions, where we did not expect it at all!" explains Dr. Andrzej Rybicki (IFJ PAN), one of the authors of the publication in Physical Review C.

"We had to model the collision of two lead nuclei as a combination of several hundred fire streaks. Under these conditions it is difficult to comment on the properties of a single streak. However, when we extracted the rapidity distribution from the model, i.e. the relativistic velocity of the particles produced by a single streak, it turned out that its shape describes the real data from particle production measurements in proton-proton collisions very well," elaborates Mirek Kielbowicz, PhD student at the IFJ PAN.

In order to make the graphs obtained using the fire streak model constructed for collisions of lead nuclei agree with the experimental data for proton-proton collisions, they had to be scaled by a factor of 0.748. The Cracow researchers demonstrated that this parameter is not free. In fact, it appears in the calculations after taking into account changes in the energy balance caused by the varying production of strange particles and can be reproduced from experimental data. This was another strong argument supporting the physical correctness of the model.

"I'm working on the fire streak model as part of my master's thesis, so it did not surprise me that it describes data from nucleus-nucleus collisions over a large energy range. However, when I saw that the fragmentation function extracted by us agrees so well with the data from proton-proton collisions, it was difficult to hide my astonishment," recalls Lukasz Rozplochowski, a student at the Jagiellonian University working with the scientific team from the IFJ PAN.

"When we described nucleus-nucleus collisions, fire streaks were for us only abstract structures, something purely theoretical. We did not delve into their physical nature, into what they could be in reality. We experienced a real shock when combining experimental data with our model, we discovered that what arises in proton-proton collisions behaves exactly like our single fire streak," sums up Dr. Rybicki.

The results of the latest analysis, carried out by the Cracow physicists under the SONATA BIS grant no. 2014/14 / E / ST2 / 00018 of the National Science Centre in Poland, thus reinforce the supposition that fire streaks, according to the theory formed both in proton-proton and nucleus-nucleus collisions, are due to real physical processes occurring in the flow flows of extremely hot quantum matter.


The Henryk Niewodniczanski Institute of Nuclear Physics (IFJ PAN) is currently the largest research institute of the Polish Academy of Sciences. The broad range of studies and activities of IFJ PAN includes basic and applied research, ranging from particle physics and astrophysics, through hadron physics, high-, medium-, and low-energy nuclear physics, condensed matter physics (including materials engineering), to various applications of methods of nuclear physics in interdisciplinary research, covering medical physics, dosimetry, radiation and environmental biology, environmental protection, and other related disciplines. The average yearly yield of the IFJ PAN encompasses more than 600 scientific papers in the Journal Citation Reports published by the Thomson Reuters. The part of the Institute is the Cyclotron Centre Bronowice (CCB) which is an infrastructure, unique in Central Europe, to serve as a clinical and research centre in the area of medical and nuclear physics. IFJ PAN is a member of the Marian Smoluchowski Kraków Research Consortium: "Matter-Energy-Future" which possesses the status of a Leading National Research Centre (KNOW) in physics for the years 2012-2017. The Institute is of A+ Category (leading level in Poland) in the field of sciences and engineering.