Solar flares are the most energetic phenomena in the solar system. A major new finding about how matter behaves in the extreme conditions of the Sun's atmosphere was announced this week by scientists from Ireland and France.

The scientists used large radio telescopes and ultraviolet cameras on a NASA spacecraft to better understand the exotic but poorly understood "fourth state of matter". Known as plasma, this matter could hold the key to developing safe, clean and efficient nuclear energy generators on Earth. The scientists published their findings in the leading international journal Nature Communications.

Most of the matter we encounter in our everyday lives comes in the form of solid, liquid or gas, but the majority of the Universe is composed of plasma - a highly unstable and electrically charged fluid. The Sun is also made up of this plasma. 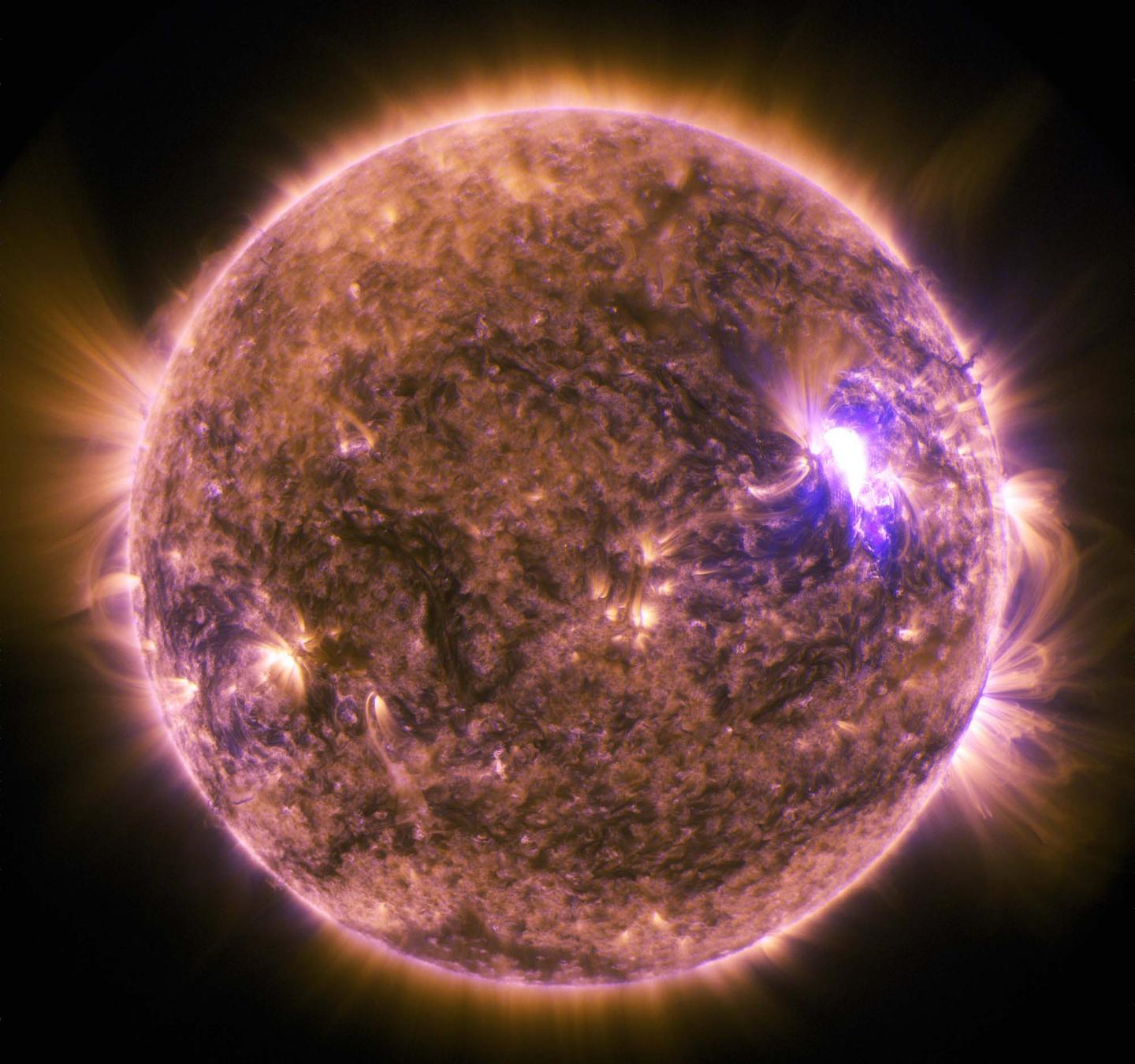 Despite being the most common form of matter in the Universe plasma remains a mystery, mainly due to its scarcity in natural conditions on Earth, which makes it difficult to study. Special laboratories on Earth recreate the extreme conditions of space for this purpose, but the Sun represents an all-natural laboratory to study how plasma behaves in conditions that are often too extreme for the manually constructed Earth-based laboratories.

Postdoctoral Researcher at Trinity College Dublin and the Dublin Institute of Advanced Studies (DIAS), Dr Eoin Carley, led the international collaboration. He said: "The solar atmosphere is a hotbed of extreme activity, with plasma temperatures in excess of 1 million degrees Celsius and particles that travel close to light-speed. The light-speed particles shine bright at radio wavelengths, so we're able to monitor exactly how plasmas behave with large radio telescopes."

"We worked closely with scientists at the Paris Observatory and performed observations of the Sun with a large radio telescope located in Nançay in central France. We combined the radio observations with ultraviolet cameras on NASA's space-based Solar Dynamics Observatory spacecraft to show that plasma on the sun can often emit radio light that pulses like a light-house. We have known about this activity for decades, but our use of space and ground-based equipment allowed us to image the radio pulses for the first time and see exactly how plasmas become unstable in the solar atmosphere."

Studying the behaviour of plasmas on the Sun allows for a comparison of how they behave on Earth, where much effort is now under way to build magnetic confinement fusion reactors. These are nuclear energy generators that are much safer, cleaner and more efficient than their fission reactor cousins that we currently use for energy today.

Professor at DIAS and collaborator on the project, Peter Gallagher, said: "Nuclear fusion is a different type of nuclear energy generation that fuses plasma atoms together, as opposed to breaking them apart like fission does. Fusion is more stable and safer, and it doesn't require highly radioactive fuel; in fact, much of the waste material from fusion is inert helium."

"The only problem is that nuclear fusion plasmas are highly unstable. As soon as the plasma starts generating energy, some natural process switches off the reaction. While this switch-off behaviour is like an inherent safety switch -- fusion reactors cannot form runaway reactions -- it also means the plasma is difficult to maintain in a stable state for energy generation. By studying how plasmas become unstable on the Sun, we can learn about how to control them on Earth."

The success of this research was made possible by the close ties between researchers at Trinity, DIAS, and their French collaborators.

Dr Nicole Vilmer, lead collaborator on the project in Paris, said: "The Paris Observatory has a long history of making radio observations of the Sun, dating back to the 1950s. By teaming up with other radio astronomy groups around Europe we are able to make groundbreaking discoveries such as this one and continue the success we have in solar radio astronomy in France. It also further strengthens scientific collaboration between France and Ireland, which I hope continues in the future."

Dr Carley previously worked at the Paris Observatory, funded by a fellowship awarded by the Irish Research Council and the European Commission. He continues to work closely with his French colleagues today, and hopes to soon study the same phenomena using both French instruments and newly built, state-of-the-art equipment in Ireland.

Dr Carley added: "The collaboration with French scientists is ongoing and we're already making progress with newly built radio telescopes in Ireland, such as the Irish Low Frequency Array (I-LOFAR). I-LOFAR can be used to uncover new plasma physics on the Sun in far greater detail than before, teaching us about how matter behaves in both plasmas on the Sun, here on Earth and throughout the Universe in general."

The work was funded by the Irish Research Council.