Researchers at EPFL are working on a technology to exploit osmotic energy – a source of power that’s naturally available at estuaries, where fresh water comes into contact with seawater. In a laboratory experiment, the team reproduced the real-world conditions that occur where rivers meet the sea (pH and salt concentration) and showed that, by shining light on a system comprising salt, water and a membrane three atoms thick, it was possible to optimize electricity production. Most renewable power technologies are weather dependent. Wind farms can only operate when there’s a breeze, and solar power plants rely on sunlight. Researchers at EPFL are working on a method to capture an energy source that’s constantly available at river estuaries: osmotic power, also known as blue energy.

Osmosis is a natural process whereby molecules migrate from a concentrated to a more dilute solution across a semi-permeable membrane in order to balance the concentrations. At river estuaries, electrically charged salt ions move from the salty seawater to the fresh river water. The idea is to harness this phenomenon to generate power.

Researchers from EPFL’s Laboratory of Nanoscale Biology(LBEN), which is headed by Professor Aleksandra Radenovic at the School of Engineering, have shown that the production of power using osmosis could be optimized using light. Reproducing the conditions that occur at estuaries, they shined light on a system combining water, salt and a membrane just three atoms thick to generate more electricity. Under the effect of light, the system produces twice as much power as it does in the dark. Their findings have been published in Joule.

In a 2016 paper, a team from the LBEN showed for the first time that 2D membranes represented a potential revolution in osmotic power production. But at the time, the experiment did not use real-world conditions (see inset). 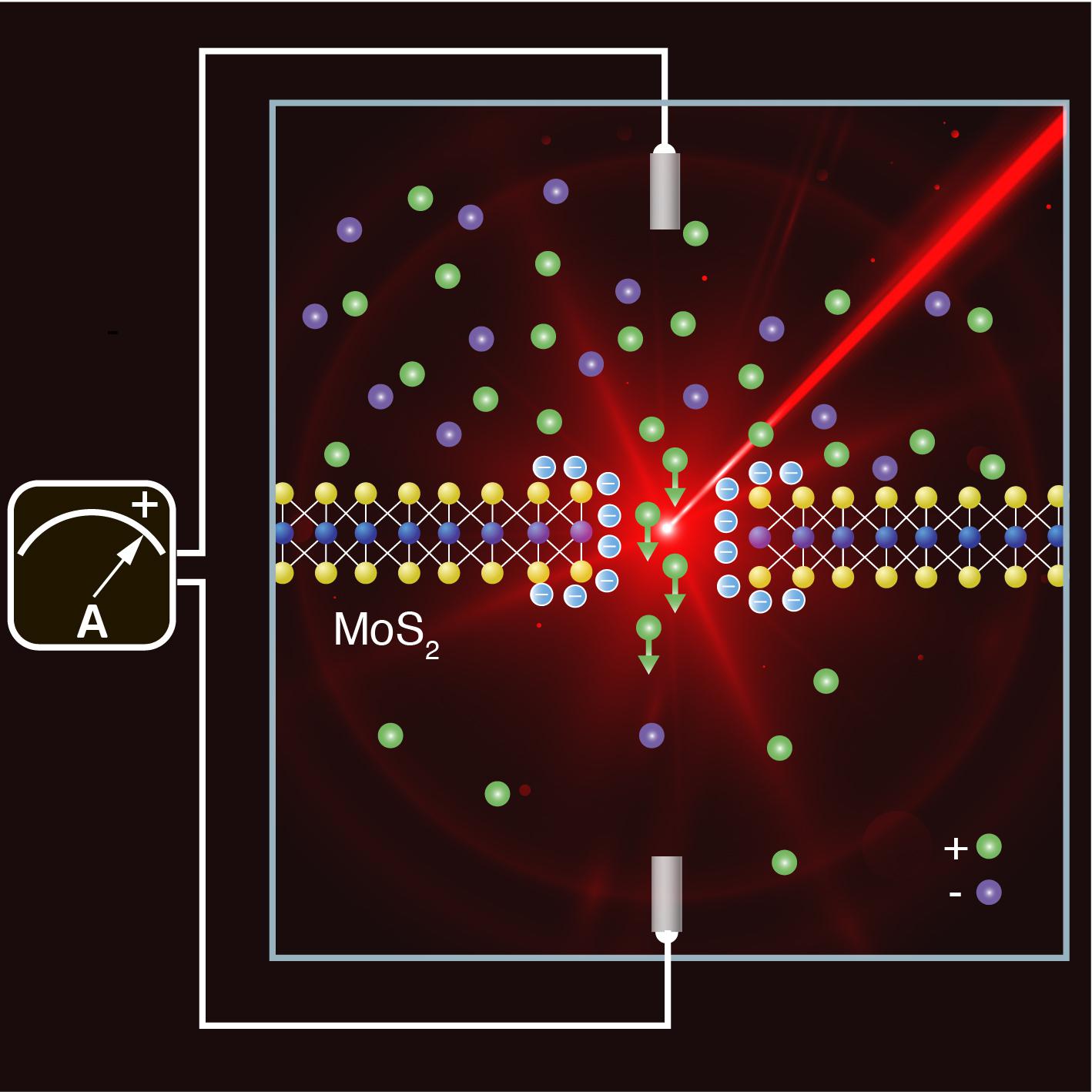 
Ions passing through a nanopore

The addition of light means the technology has moved one step closer to real-world application. The system involves two liquid-filled compartments, at markedly different salt concentrations, separated by a molybdenum disulfide (MoS2) membrane. In the middle of the membrane is a nanopore – a tiny hole between three and ten nanometers (one millionth of a millimeter) in diameter.

Every time a salt ion passes through the hole from the high- to the low-concentration solution, an electron is transferred to an electrode, which generates an electric current.

The system’s power generation potential depends on a number of factors – not least the membrane itself, which needs to be thin in order to generate maximum current. The nanopore also has to be selective to create a potential difference (a voltage) between the two liquids, just like in a conventional battery. The nanopore allows positively charged ions to pass through, while pushing away most of the negatively charged ones.

The system is finely balanced. The nanopore and the membrane have to be highly charged, and multiple identically sized nanopores are needed, which is a technically challenging process.

Harnessing the power of sunlight

The researchers got around these two problems at the same time by using low-intensity laser light. Light releases embedded electrons and causes them to accumulate at the membrane’s surface, which increases the surface charge of the material. As a result, the nanopore is more selective and the current flow increases. 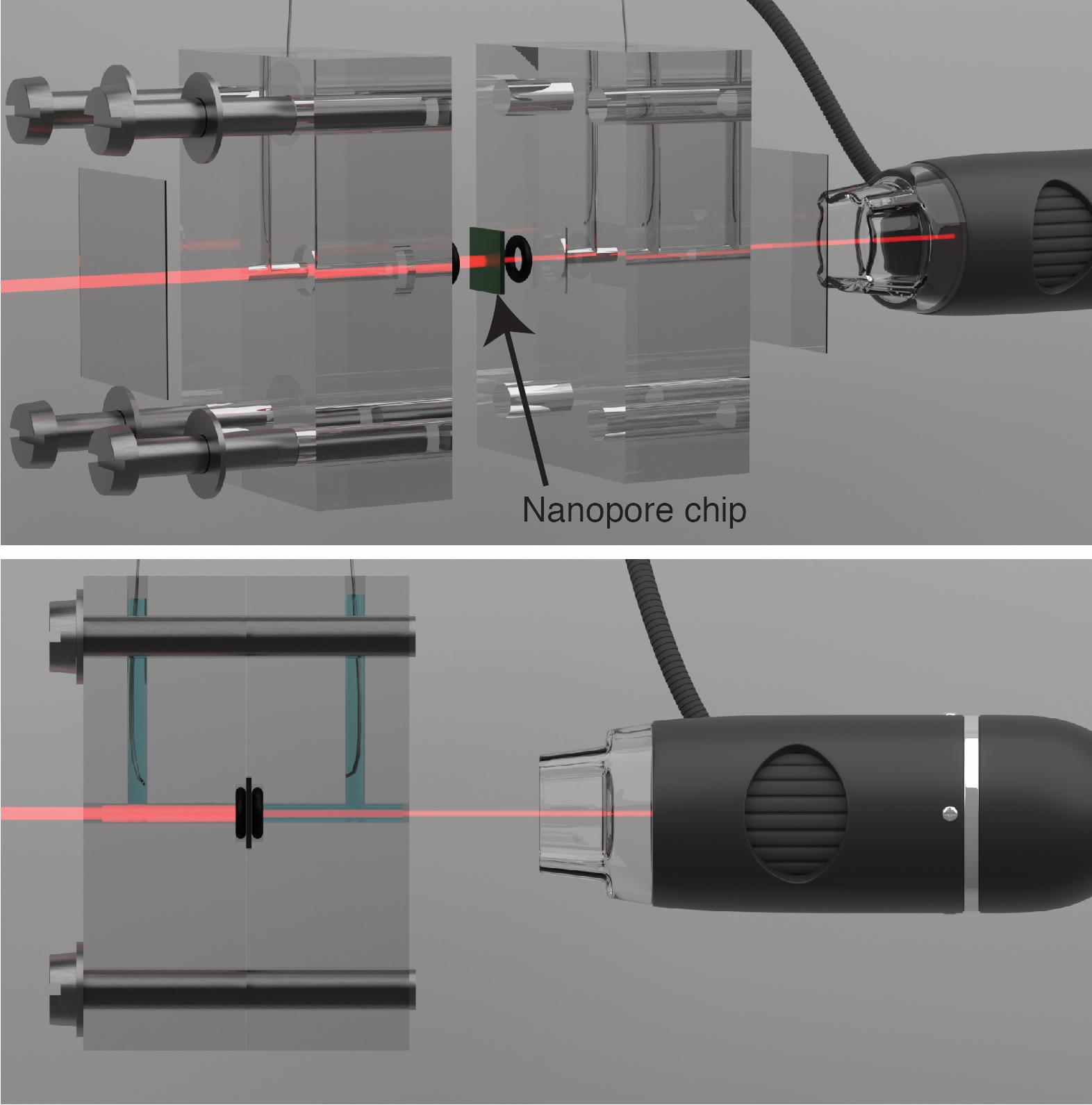 “Taken together, these two effects mean we don’t have to worry quite so much about the size of the nanopores,” explains Martina Lihter, a researcher at the LBEN. “That’s good news for large-scale production of the technology, since the holes don’t have to be perfect and uniform.”

According to the researchers, a system of mirrors and lenses could be used to direct this light onto the membranes at river estuaries. Similar systems are used in solar collectors and concentrators – a technology already widely employed in photovoltaics. “Essentially, the system could generate osmotic power day and night,” explains Michael Graf, the lead author of the paper. “Output would double during daylight hours.”

Researchers will now pursue their work by exploring possibilities to scale up production of the membrane, addressing a range of challenges such as optimal pore density. There is still a lot of work to do before the technology can be used for real-world applications. For instance, the ultra-thin membrane needs to be mechanically stabilized. This could be done by using a silicon wafer containing a dense array of silicon nitride membranes, which are easy and cheap to manufacture.

This research, led by LBEN, is being conducted as part of a collaboration between two EPFL labs (LANES and LBEN) and researchers at the Department of Electrical and Computer Engineering, University of Illinois Urbana-Champaign.


Back in 2016, researchers from the LBEN reported that, for the first time, they had produced osmotic power across 2D membranes measuring just three atoms thick. The experiment was an important demonstration that nanomaterials may indeed represent a revolution in this domain, with direct application envisioned for renewable energy and small, portable sources of energy.

At the time, to achieve high power generation, the researchers had to operate in an alkaline environment, with high pH levels that are far from the values found in estuaries. High pH was required to increase the surface charge of the MoS2 and to improve osmotic power output.

This time around, instead of using chemical treatments, the researchers discovered that light could play that role, allowing them to operate in real-world conditions.
Funding