A Rose Inspires Smart Way to Collect and Purify Water

The rose may be one of the most iconic symbols of the fragility of love in popular culture, but now the flower could hold more than just symbolic value. A new device for collecting and purifying water, developed at The University of Texas at Austin, was inspired by a rose and, while more engineered than enchanted, is a dramatic improvement on current methods. Each flower-like structure costs less than 2 cents and can produce more than half a gallon of water per hour per square meter. 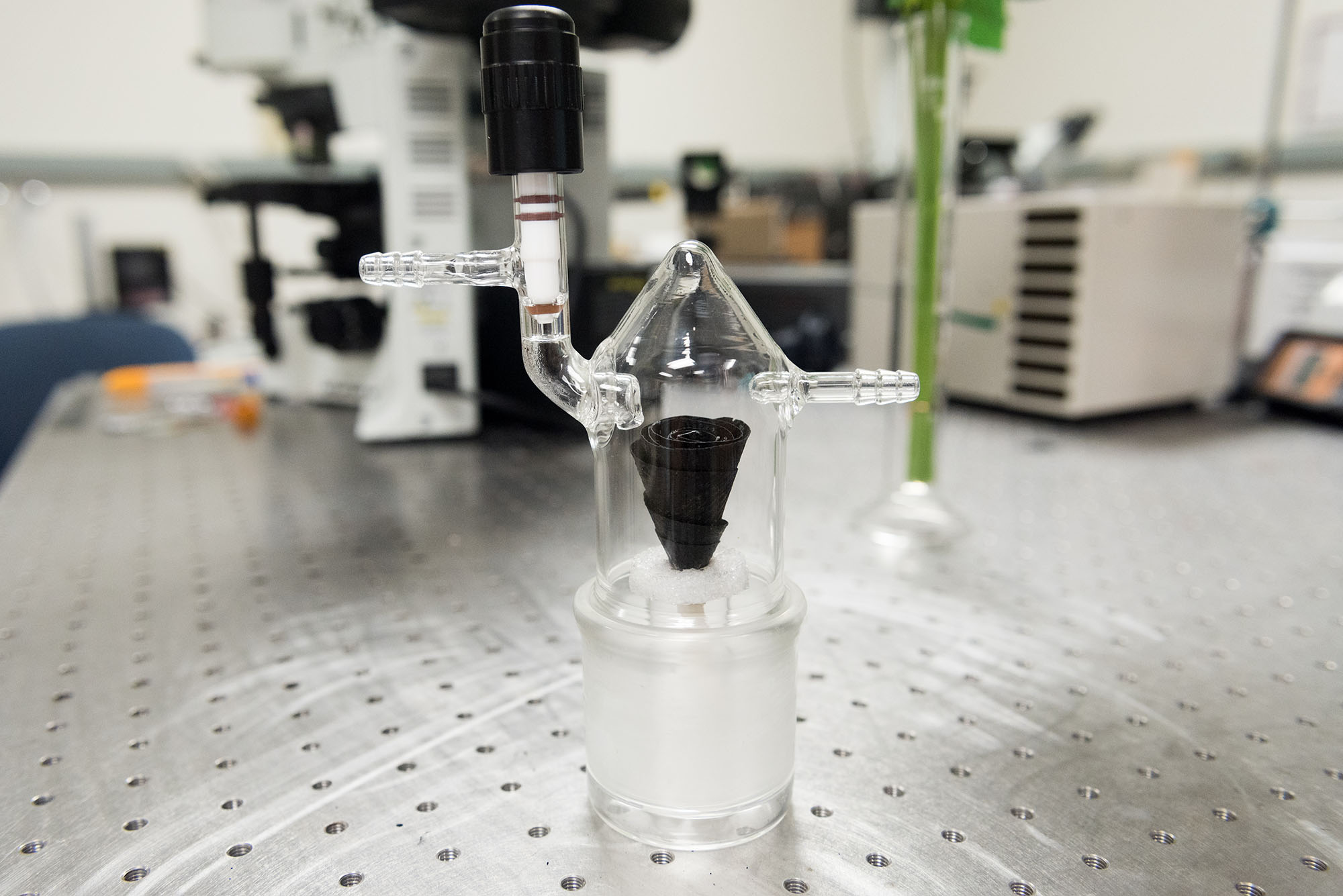 
A team led by associate professor Donglei (Emma) Fan in the Cockrell School of Engineering’s Walker Department of Mechanical Engineering developed a new approach to solar steaming for water production – a technique that uses energy from sunlight to separate salt and other impurities from water through evaporation.

In a paper published in the most recent issue of the journal Advanced Materials, the authors outline how an origami rose provided the inspiration for developing a new kind of solar-steaming system made from layered, black paper sheets shaped into petals. Attached to a stem-like tube that collects untreated water from any water source, the 3D rose shape makes it easier for the structure to collect and retain more liquid.

Current solar-steaming technologies are usually expensive, bulky and produce limited results. The team’s method uses inexpensive materials that are portable and lightweight. Oh, and it also looks just like a black-petaled rose in a glass jar.

Those in the know would more accurately describe it as a portable low-pressure controlled solar-steaming-collection “unisystem.” But its resemblance to a flower is no coincidence.

“We were searching for more efficient ways to apply the solar-steaming technique for water production by using black filtered paper coated with a special type of polymer, known as polypyrrole,” Fan said.

Polypyrrole is a material known for its photothermal properties, meaning it’s particularly good at converting solar light into thermal heat.

Fan and her team experimented with a number of different ways to shape the paper to see what was best for achieving optimal water retention levels. They began by placing single, round layers of the coated paper flat on the ground under direct sunlight. The single sheets showed promise as water collectors but not in sufficient amounts. After toying with a few other shapes, Fan was inspired by a book she read in high school. Although not about roses per se, “The Black Tulip” by Alexandre Dumas gave her the idea to try using a flower-like shape, and she discovered the rose to be ideal. Its structure allowed more direct sunlight to hit the photothermic material – with more internal reflections – than other floral shapes and also provided enlarged surface area for water vapor to dissipate from the material.

The device collects water through its stem-like tube – feeding it to the flower-shaped structure on top. It can also collect rain drops coming from above. Water finds its way to the petals where the polypyrrole material coating the flower turns the water into steam. Impurities naturally separate from water when condensed in this way.

“We designed the purification-collection unisystem to include a connection point for a low-pressure pump to help condense the water more effectively,” said Weigu Li, a Ph.D. candidate in Fan’s lab and lead author on the paper. “Once it is condensed, the glass jar is designed to be compact, sturdy and secure for storing clean water.”

The device removes any contamination from heavy metals and bacteria, and it removes salt from seawater, producing clean water that meets drinking standard requirements set by the World Health Organization.

The research was funded by the National Science Foundation and the Welch Foundation.

Contacts and sources:
John Holden
University of Texas at Austin