Contrary to popular belief, lightning often does strike twice, but the reason why a lightning channel is ‘reused’ has remained a mystery.

The video shows a zoom-in on the positively charged channel. In real time, the development takes only 0.1 seconds and spans a distance of about 400 metres. Initially, there is little activity along the channel: it is barely visible. Only at 0:10 seconds does one see the needles develop. One particularly large needle is depicted in red. Multiple needles can be seen along the lightning channel, with each one, including the red one, ‘lighting up’ multiple times. At 0:20 seconds, the activity in this part of the channel stops, with some activity remaining at more distant points along the channel

Now, an international research team led by the University of Groningen has used the LOFAR radio telescope to study the development of lightning flashes in unprecedented detail. Their work reveals that the negative charges inside a thundercloud are not discharged all in a single flash, but are in part stored alongside the leader channel at interruptions. This occurs inside structures which the researchers have called needles.

Through these needles, a negative charge may cause a repeated discharge to the ground. The results were published on 18 April in the science journal Nature.

Lightning above the central part of LOFAR "Superterp" 
“This finding is in sharp contrast to the present picture, in which the charge flows along plasma channels directly from one part of the cloud to another, or to the ground”, explains Olaf Scholten, Professor of Physics at the KVI-CART institute of the University of Groningen. The reason why the needles have never been seen before lies in the ‘supreme capabilities’ of LOFAR, adds his colleague Dr Brian Hare, first author of the paper: “These needles can have a length of 100 metres and a diameter of less than five metres, and are too small and too short-lived for other lightning detections systems.”

Low Frequency Array (LOFAR) is a Dutch radio telescope consisting of thousands of rather simple antennas spread out over Northern Europe. These antennas are connected with a central computer through fibre-optic cables, which means that they can operate as a single entity. LOFAR is developed primarily for radio astronomy observations, but the frequency range of the antennas also makes it suitable for lightning research, as discharges produce bursts in the VHF (very high frequency) radio band.

For the present lightning observations, the scientists have used only the Dutch LOFAR stations, which cover an area of 3,200 square kilometres. This new study analysed the raw time-traces (which are accurate to one nanosecond) as measured in the 30-80 MHz band. Brian Hare: “These data allow us to detect lightning propagation at a scale where, for the first time, we can distinguish the primary processes. Furthermore, the use of radio waves allows us to look inside the thundercloud, where most of the lightning resides.”

The video shows the development of the lightning in slow motion. In real time, the duration is less than 0.2 seconds and towards the end the discharge, spans about five kilometres in all directions. The bright yellow flashes are the new radio pulses detected, which quickly fade to small white dots to give the sense of the structure. The positively charged lightning channels are seen at the top of the lightning flash, grow upwards, and appear to twinkle because of the newly discovered needles. The twinkling is most active between 0:14 and 0:21 seconds. The negatively charged channels grow downwards, and are seen to grow continuously (they don’t twinkle). One negative channel even reaches ground at 0:14 seconds. Towards the end of the video, there is still some activity along the positive channel.
Credit: Stijn Buitink (VUB, Brussels) and Brian Hare (University of Groningen).

Lightning occurs when strong updrafts generate a kind of static electricity in large cumulonimbus clouds. Parts of the cloud become positively charged and others negatively. When this charge separation is large enough, a violent discharge happens, which we know as lightning. Such a discharge starts with a plasma, a small area of ionized air hot enough to be electrically conductive. This small area grows into a forked plasma channel that can reach lengths of several kilometres. The positive tips of the plasma channel collect negative charges from the cloud, which pass through the channel to the negative tip, where the charge is discharged. It was already known that a large amount of VHF emissions is produced at the growing tips of the negative channels while the positive channels show emissions only along the channel, not at the tip.

The scientists developed a new algorithm for LOFAR data, allowing them to visualize the VHF radio emissions from two lightning flashes. The antenna array and the very precise time stamp on all the data allowed them to pinpoint the emission sources with unprecedented resolution. “Close to the core area of LOFAR, where the antenna density is highest, the spatial accuracy was about one metre”, says Professor Scholten. Furthermore, the data obtained was capable of localizing 10 times more VHF sources than other three-dimensional imaging systems, with a temporal resolution in the range of nanoseconds. This resulted in a high-resolution 3D image of the lightning discharge. 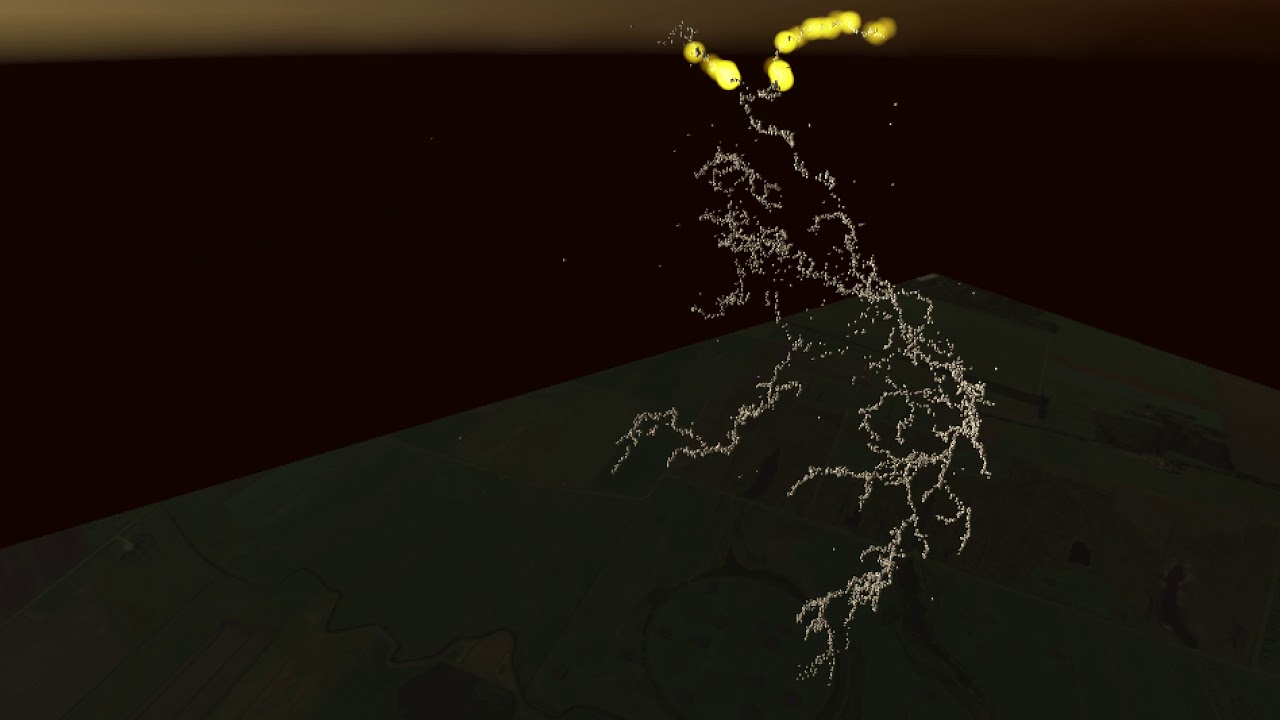 The results clearly show the occurrence of a break in the discharge channel, at a location where needles are formed. These appear to discharge negative charges from the main channel, which subsequently re-enter the cloud. The reduction of charges in the channel causes the break. However, once the charge in the cloud becomes high enough again, the flow through the channel is restored, leading to a second discharge of lightning. By this mechanism, lightning will strike in the same area repeatedly.

Scholten: “The VHF emissions along the positive channel are due to rather regularly repeated discharges along previously formed side channels, the needles. These needles appear to drain the charges in a pulsed manner.” This is a totally new phenomenon, adds Professor Joe Dwyer of the University of New Hampshire (US), third author of the paper: “Our new observation techniques show copious amounts of needles in the lightning flash, which have not been seen before.” And Brian Hare concludes: “From these observations, we see that a part of the cloud is re-charged, and we can understand why a lightning discharge to the ground may repeat itself a few times.”


Contacts and sources:
University of Groningen