The Evolution Of South America Mammals: Climate, Grasses and Teeth

The atmospheric circulation called the Hadley circulation intensified about 6 million years ago and fueled environmental changes in South America, a University of Arizona (UA)-led team found.

The Hadley cell, named after George Hadley, is a global scale tropical atmospheric circulation that features air rising near the Equator, flowing poleward at a height of 10 to 15 kilometers above the earth’s surface, descending in the subtropics, and then returning equatorward near the surface. This circulation creates the trade winds, tropical rain-belts and hurricanes, subtropical deserts and the jet streams. 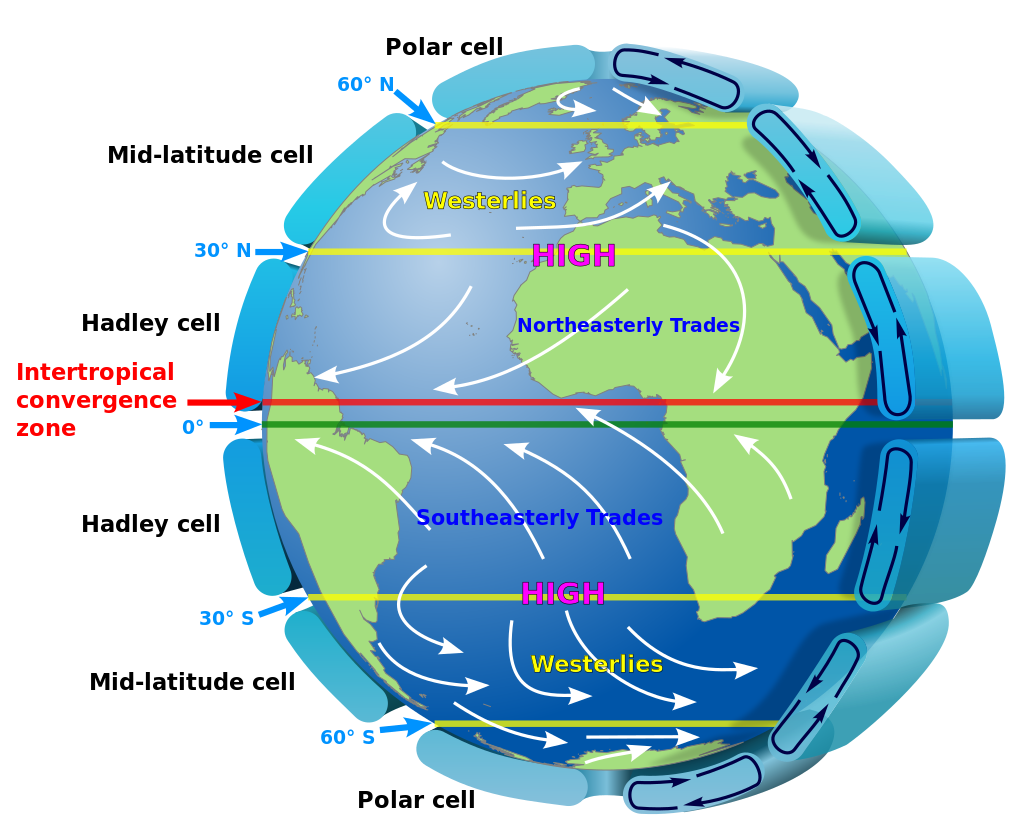 Armadillos as big as Volkswagens and other grass-eating mammals became more diverse in South America about 6 million years ago because shifts in atmospheric circulation drove changes in climate and vegetation, a UA geoscientist and her colleagues report.

Geoscientists already knew the Earth was cooling 7 to 5.5 million years ago, a period of time known as the late Miocene

An illustration of two male glyptodonts (Doedicurus clavicaudatus) facing off: The massive, club-shaped tails were probably used more for intraspecific combat than defense against predators. 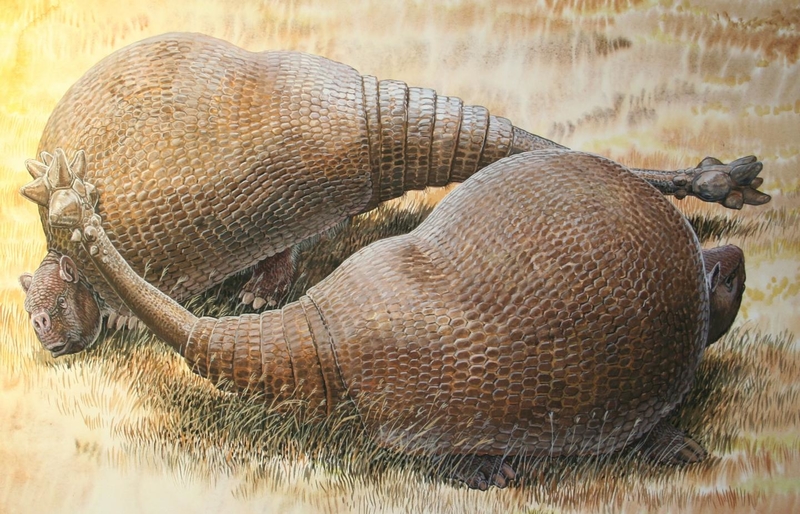 However, the changes in ocean climate during that time have been better understood than changes in the continental climate, said lead author Barbara Carrapa, professor and head of the UA Department of Geosciences.

The new research shows that about 7 to 6 million years ago, the global tropical atmospheric circulation known as the Hadley circulation intensified. As a result, the climate of South America became drier, subtropical grasslands expanded and the numbers of mammal species that were good at eating grasses increased.

Carrapa and her colleagues used a computer model to figure out that the Hadley circulation had strengthened in the late Miocene, altering the climate. They then compared the model's predictions of the past climate with the natural archives of rainfall and vegetation stored in ancient soils. The model's predictions agreed with the natural archives.

"We found a strong correlation between this big change in late Miocene climate and circulation that affected the ecology – the plants and animals," she said. "It has implications for ecosystem evolution."

Carrapa said the new research – an unusual blend of mammalian paleontology, the geochemistry of ancient soils and global climate computer models – provides a new understanding of the late Miocene, a time when near-modern ecosystems became established.

The paper, "Ecological and hydroclimate responses to strengthening of the Hadley circulation in South America during the Late Miocene Cooling," by Carrapa, Mark Clementz of the University of Wyoming and Ran Feng of the University of Connecticut was published April 29 in the Proceedings of the National Academy of Sciences. The National Science Foundation funded the research.

Geoscientists use the geochemistry of ancient soils, specifically forms of the elements oxygen and carbon, to infer past precipitation and vegetation. Researchers had thought the precipitation at the time the soil formed was mostly a function of the site's topography and elevation.

Carrapa wanted to test that idea by looking at the geochemistry of ancient soils on a continental scale. She teamed up with her long-time colleague Clementz, a paleontologist.

The researchers compiled the published data of the oxygen-18/oxygen-16 ratio and carbon-13/carbon-12 ratio from ancient soils covering a wide swath of South America – from 15 degrees South latitude to 35 degrees South latitude, or about the change from La Paz, Bolivia, to Buenos Aires, Argentina. Changes in the oxygen ratio provide information on past precipitation, while changes in carbon ratio indicate what plants were growing at the time.

Clementz scoured the published literature and did what Carrapa called "... an amazing job of pulling all the data together so we could look at it in a comprehensive way." 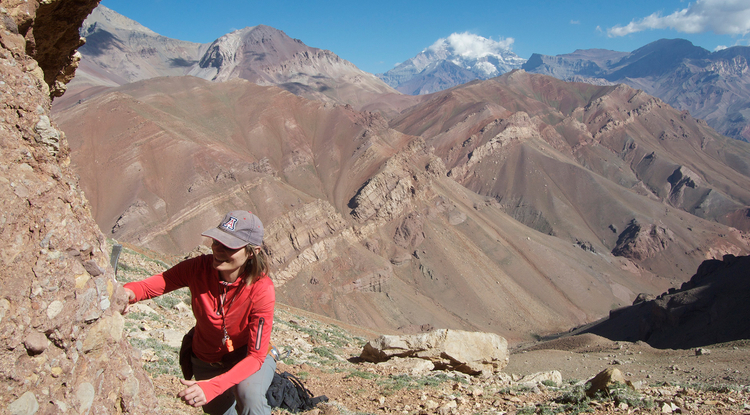 The results were surprising, Carrapa said. The changes in soil geochemistry during the late Miocene changed in latitudinal bands from north to south, indicating an underlying cause spanning much of South America, not just local changes in elevation or topography.

The two researchers thought the systematic shifts in soil geochemistry were related to changes in climate, so they asked Feng to help them by applying the global climate model she used for research.

Feng loaded known information about the Miocene-to-late-Miocene climate, including atmospheric carbon dioxide concentrations and the ocean temperatures, into the computer model and then asked it to simulate three different versions of late Miocene climate – not much cooler, cooler, and much cooler than before. In each case, the simulation indicated what soil geochemistry would have occurred under that climate regime.

Feng figured out that the Earth's Hadley circulation intensified from 7 to 6 million years ago.

"The records compiled by Barbara and Mark could be explained by a significant change in the strength of the Hadley circulation," she said.

Feng's work with the global climate model shows how the past climate could have created the patterns the team was seeing in the soil geochemistry, Clementz said.

The carbon ratio from the ancient soils reflects the vegetation of the time and indicates that in the late Miocene, grasslands were expanding as the climate was changing.

"During the late Miocene, things are starting to dry out, particularly in the 25-30 degree South zone," he said. "There's also an increase in the numbers of animals with high-crowned or ever-growing teeth."

Grasses contain silica, an abrasive substance, which is why grass-eaters have either high-crowned teeth or teeth that continue to grow. The mammals that became more prevalent in the late Miocene included giant armadillos and rhinoceros-like animals and also smaller mammals, he said.

Citation: Ecological and hydroclimate responses to strengthening of the Hadley circulation in South America during the Late Miocene cooling.
Barbara Carrapa, Mark Clementz, Ran Feng.Proceedings of the National Academy of Sciences, 2019; 201810721 DOI: 10.1073/pnas.1810721116