Supersolidity's Paradoxical State 50 Years in the Making: Matter Is Both Crystallized and Superfluid

An exotic phase of matter was just made,  supersolids were created from quantum gases, a state in which matter is a crystal and a superfluid. It took 50 years from idea to the making.

Researchers led by Francesca Ferlaino at the University of Innsbruck and Austrian Academy of Sciences report in Physical Review X on the observation of supersolid behavior in dipolar quantum gases of erbium and dysprosium. In the dysprosium gas these properties are unprecedentedly long-lived. This sets the stage for future investigations into the nature of this exotic phase of matter.

Image: Several tens of thousands of particles spontaneously organize in a self-determined crystalline structure while sharing the same macroscopic wavefunction - hallmarks of supersolidity. 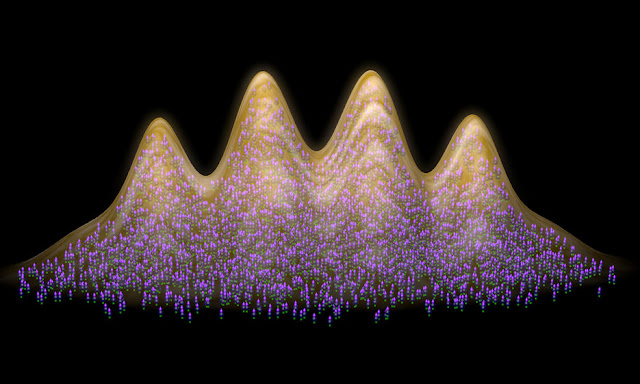 Supersolidity is a paradoxical state where the matter is both crystallized and superfluid. Predicted 50 years ago, such a counter-intuitive phase, featuring rather antithetic properties, has been long searched in superfluid helium. However, after decades of theoretical and experimental efforts, an unambiguous proof of supersolidity in these systems is still missing. Two research teams led by Francesca Ferlaino, one at the Institute for Experimental Physics at the University of Innsbruck and one at the Institute for Quantum Optics and Quantum Information of the Austrian Academy of Sciences now report on the observation of hallmarks of this exotic state in ultracold atomic gases.


While so far, most work has focused on helium, researchers have recently turned to atomic gases—in particular, those with strong dipolar interactions. The team of Francesca Ferlaino has been investigating quantum gases made of atoms with a strong dipolar character for a long time. “Recent experiments have revealed that such gases exhibit fundamental similarities with superfluid helium”, says Lauriane Chomaz referring to experimental achievements in Innsbruck and in Stuttgart over the last few years. “These features lay the groundwork for reaching a state where the several tens of thousands of particles of the gas spontaneously organize in a self-determined crystalline structure while sharing the same macroscopic wavefunction - hallmarks of supersolidity.”


The researchers in Innsbruck experimentally created states showing these characteristics of supersolidity by tuning the interaction strength between the particles, in both erbium and dysprosium quantum gases. “While in erbium the supersolid behavior is only transient, in line with recent beautiful experiments in Pisa and in Stuttgart, our dysprosium realization shows an unprecedented stability”, says Francesca Ferlaino. “Here, the supersolid behavior not only lives long but can also be directly achieved via evaporative cooling, starting from a thermal sample.” Like blowing over a cup of tea, the principle here is to remove the particles that carry the most of energies so that the gas becomes cooler and cooler and finally reaches a quantum-degenerate stationary state with supersolid properties at thermal equilibrium.

This offers exciting prospects for near-future experiments and theories as the supersolid state in this setting is little affected by dissipative dynamics or excitations, thus paving the way for probing its excitation spectrum and its superfluid behavior. The work was financially supported by the Austrian Science Fund FWF, the Austrian Academy of Sciences and the European Union.


Contacts and sources:
University of Innsbruck