Star Made from a Disrupted Dwarf Galaxy

Stars retain the materials of their birthplace. Some stars are made of the residue of material from dwarf galaxies passing larger galaxies.

Small stellar systems like dwarf galaxies are suggested to be the main building blocks of our Galaxy. However, it is unclear how many and what kind of stars in our Galaxy are originated from satellite dwarf galaxies.

This is a star accreted from a disrupted dwarf galaxy. 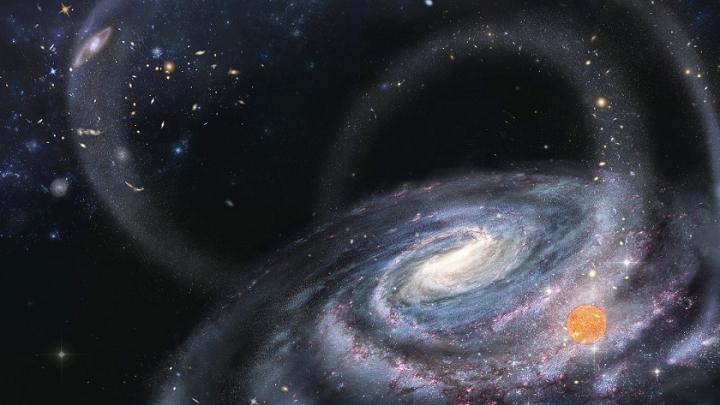 An international team led by ZHAO Gang, a professor from the National Astronomical Observatories of Chinese Academy of Sciences (NAOC) discovered a chemically peculiar star accreted from a disrupted dwarf galaxy. According to results obtained through the Large Sky Area Multi-Object Fiber Spectroscopic Telescope (LAMOST) and Subaru telescope, the star has an unusually low amount of magnesium which is the eighth most abundant element in the universe.

Meanwhile it contains an excessive amount of heavy elements, such as europium, gold, and uranium. The team reported their findings online in Nature Astronomy on April 29th, 2019.

"Stars preserve chemical information of its birth site. We can distinguish stars formed in the Milky Way from stars formed in dwarf galaxies based on their chemical abundances," says ZHAO who is also the corresponding author of the paper.

The chemical composition of this star that the authors discovered suggests it is originated from a dwarf galaxy which was disrupted by interaction with the Milky Way.

The data was obtained by LAMOST, a spectroscopic survey telescope that is capable to take 4,000 spectra in a single exposure. So far LAMOST has obtained more than 8 million stellar spectra for studies of the formation of the Milky Way. "The massive spectra provided by the LAMOST survey give us a great opportunity to find chemically peculiar stars," says XING Qianfan, Ph.D., first author of this paper. This type of stars can be used to explore the chemical evolution of different stellar systems.

XING continues, "This newly discovered star with large excesses of heavy elements provides a window for exploring the chemical evolution of disrupted dwarf galaxies. The star formation in dwarf galaxies is relatively slow comparing to larger galaxies, leading to chemical differences among their stellar populations. For instance, the magnesium to iron (Mg/Fe) abundance ratios in stars of dwarf galaxies currently found around the Milky Way are much smaller than those in the majority of stars in the Milky Way."

"This is the first discovery of a star having a very low amount of magnesium and an excessive amount of heavy elements," says co-author LI Haining, Ph.D.

The extreme enhancement of heavy elements of this star suggests this dwarf galaxy was affected by high-yield rapid neutron-capture process (r-process), the dominant process through which elements heavier than iron are formed. Such process may happen during mergers of binary neutron stars in the dwarf galaxy.

"The discovery of this chemically peculiar star is a good start of chemical identification of stars accreted from dwarf galaxies. Such stars will be good tracers for exploring the assemble history of the Milky Way," says ZHAO.

This study is supported by the National Natural Science Foundation of China.